Why Bahrain must be Renault's nadir

There’s a strong argument to be made that Renault has had the most disappointing start to the 2019 season.

Sure, there’s the Williams team pootling around at the back of the grid more than a second off the pace in qualifying and several laps down in the race, but at least expectations for the once great British constructor were rapidly revised downwards during its horror run into the preseason, what with it not having a car or technical director ready.

Haas too has had an opening fortnight of mixed fortune, losing one car to a wheel nut failure in Australia and finding itself inexplicably and woefully off the pace during the race in Bahrain — but the VF19 is fundamentally quick, and such varying performances aren’t that surprising for a team in only its fourth season of competition.

But neither team has been afflicted by the deadly cocktail of high ambition and painful reality that Renault has mixed for itself thus far this season.

Nothing but positive sounds emanated from Renault during the 2018–19 preseason. All the right things were being said about the team’s brand-new engine, its Achilles heel in the turbo-hybrid era.

Redesigned after Renault’s Viry-Chatillon felt its previous iterations were too structurally limited, engine technical director Remi Taffin revealed he was satisfied its goals for the beginning of the season had been met.

“Everything we actually developed and measured on the dyno were the same as what we see out on track,” he said, as per Autosport. “We have set some high targets for this year, which we hit.”

Renault also promised steps forward on the chassis side. Spurred on by the change in regulations affecting some of the car’s most influential downforce-generating parts, the RS19 is a near total revision, with only the power steering carried over from 2018.

With Renault managing director hailing the team’s biggest off-season step in the last four years, Renault Sport Racing president Jerome Stoll said at the team’s 2019 launch that, “If I have one thing to share with you, it is for you to get convinced that we are a real contender for the podium, and this is our ambition”.

Admittedly that aim wasn’t to be a top-three team in 2019; rather it was that Renault hoped to be close enough to the front-running triumvirate that it would be able to snipe for a podium when conditions were favourable.

But even accounting for this caveat the start of the 2019 season has found the team to be wanting.

The headline results list three retirements — though two were classified as more than 90 per cent of the race distance has been completed — and one points finish from four starts, which is the grid’s worst reliability record to date.

Add in Carlos Sainz’s engine failure at the Australian Grand Prix, which resulted in the Spaniard taking his first of three new internal combustion engines, turbochargers and MGU-H units and his first of two new MGU-K components, and the picture becomes only gloomier.

It was in Bahrain where the team’s problems made themselves most evident. Software issues hamstrung both Nico Hulkenberg and Daniel Ricciardo during qualifying — as they did in Australia, at least on Nico’s car — triggering a power unit safe mode that left both down on power.

They were eliminated in 17th and 11th respectively despite harbouring expectations for a Q3 qualification.

Though the car showed a reasonable turn of pace on race day, both drivers failed to make it to the chequered flag thanks to an embarrassing synchronised failure of both power units, Hulkenberg’s more spectacularly mechanical, Ricciardo’s confirmed as another MGU-K issue.

“These problems are increasingly frustrating and unacceptable,” team boss Abiteboul said, admitting the team had experienced them before. “We must react and shift our focus on reliability.”

But even before the engines called it quits the team appeared to be butchering its race. Ricciardo, having qualified higher and running sixth on merit early in the race, was put on a bizarre one-stop strategy that was destined to cost him serious points. He had fallen to tenth when his engine gave up the ghost. 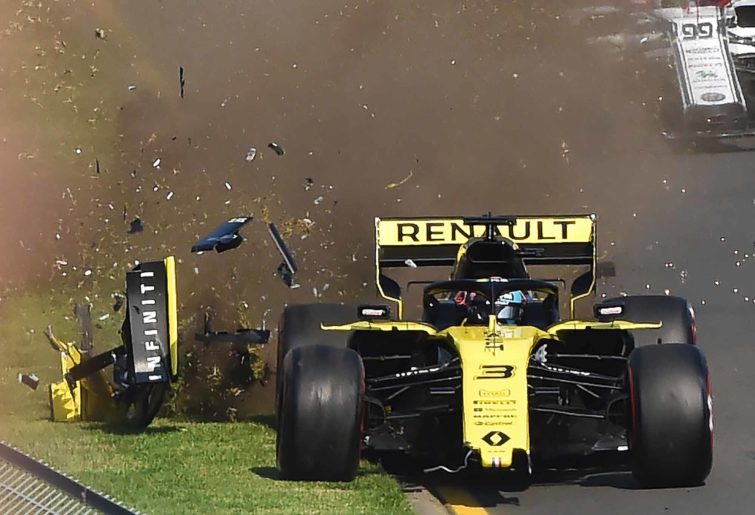 No other team went near the one-stop at a circuit renowned for its abrasiveness on Pirelli’s thin-gauge tyres, and to attempt it with its highest-placed driver running in a competitive position makes the call inexplicable, whether borne of a lack of understanding of the car or a simple lack of sharpness.

The team will at least take solace in the fact that Hulkenberg, with a functioning car and optimum strategy, was comfortably best of the midfield before his motor cooked itself, but even this comes with qualifications. Haas was desperately out of sorts in race trim despite qualifying sixth and eighth, for example, and Carlos Sainz was competitive early before a collision with Max Verstappen took him out of the race.

We are of course just two rounds into a 21-race season and it is therefore premature to write off Renault as a midfield force, but if the French team still aims to race for wins and championships by 2021, the Bahrain Grand Prix has to be made its lowest ebb in what must be a much stronger season than what it’s dished up so far.