Why the AFL needs to take the rules back to basics

I heard the most astonishing comment on Friday night.

As the Melbourne vs Essendon game tapered into the final minutes, Brian Taylor pointed out that the Thursday night Adelaide vs Geelong game had featured 30 free kicks while Essendon vs Melbourne had tallied 51 free kicks.

Commentator James Brayshaw then noted he believed 30 was a much better ratio for free kicks. This is not the first time Brayshaw has made such a statement. During a game last year he lamented that he felt there were too many free kicks being paid.

I will acknowledge that the umpiring was inconsistently trigger-happy during the Melbourne-Essendon game. Wayne Carey bemoaned that soft free kicks had been paid at key times that influenced the game’s development. That’s fine. This is not the game to use as a template for the future.

But all that notwithstanding, I am curious how James Brayshaw can feel, as he said on Triple M’s Saturday Rub the next day, that we’d be better off if the number of free kicks was “halved”. Does he feel they should be capped like interchange rotations? That once a certain figure is hit the umpires should put their whistles away? Or that umpires just pay fewer free kicks overall? Or that they only pay a certain number each quarter? I’m unsure how you can logically maintain a ‘ratio’.

Free kicks should be paid 100 per cent of the time when they are there, whether that’s ten times a game or 100 times a game. There is no ratio. Naturally games are going to produce different figures. A dour contested struggle may produce more free kicks because there are more stoppages and tackles than a freewheeling basketball-type game that goes back and forth. Similarly, there’s no reason teams should have a relatively even number free kicks as one side might dominate or tackle more et cetera. 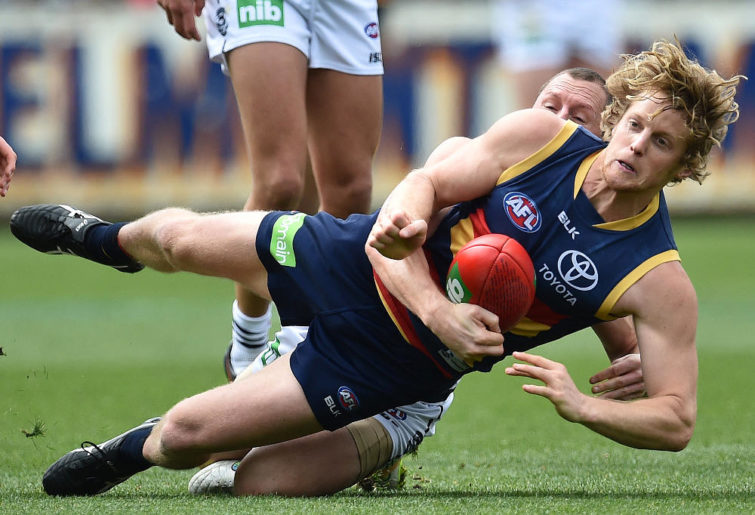 We shouldn’t focus on quantity, because logically that figure will vary. Or it should. But it doesn’t. And the reason for that? It’s because the rules themselves – rules that should be concrete and absolute – vary.

We’ve all seen it. Let’s go back to Friday night. The commentators speculated that holding the player in a marking contest seemed to be the hot one this week. How often does that occur when one particular rule is stringently enforced – or even overly enforced – during one game but not during the next?

We get frees that are the flavour of the week, frees that may be paid depending on where they occur on the field and frees that stop being paid as a game tightens up. The qualifications on free kicks are constantly changing. And nobody asks why it keeps happening. Nobody asks why the AFL is not held accountable. Nobody questions it, because we know nothing will ever be done about it. We just accept it as existing.

The best example is ruck infringements, an aberration that’s existed for over ten years. Two rucks go up. They tussle. The umpire blows his whistle. Then everybody turns, waiting to see the way it’s going to be arbitrated. The rucks don’t know. The players around them don’t know. The commentators don’t know. The fans don’t know. Nobody knows.

When other free kicks are awarded you can pretty much understand why (well, you used to be able to). If one player falls in another’s back or a player is tackled and drops the ball, you know what’s going to be awarded before the umpire clarifies. But ruck infringements? Nup.

Sadly we have more of these grey rules being introduced. Is it a slide when a player goes in to get the ball or is he collected too high? When a player picks up a ball and contact is made to the head is it too high or did he duck? When the ball is knocked, handballed, kicked or carried out of bounds, is it deliberate or accidental? If a behind is rushed, is that deliberate or a legitimate rush?

I appreciate umpiring such a fast and frenetic game is going to be difficult and that umpires are going to make mistakes. That’s human nature. Everybody makes mistakes. The problem is we’ve always had rules that have governed the game well, but their application has become inconsistent, and then we introduce subjunctive qualifications or new rules (for example, hands in the back) when an existing rule (in the case of this example, push in the back) should already be doing the same job. Or a rule is introduced as a kneejerk response to an injury (for example, the sliding) or an aesthetic that’s deemed unsightly, such as rotations.

Dictionary.com states the definition of ‘rules’ is “a principle or regulation governing conduct, action, procedure, arrangement, etc.: the rules of chess.”

The rules are the rules all the time and they should be treated as such. That’s why they’re the rules.

But let’s gear up for next week’s round of inconsistency and never raise a single question about it.

Now that we have 21 teams based on surnames, it’s time to look at a few selection changes based on feedback and additional research as well as compare each team to come out with an overall best letter. You can read the full team lists here. Let’s start with some selection changes. Letter Letter A […]

It’s not always been good, but the AFL Grand Final entertainment has featured plenty of unforgettable performances over the years.

Do you agree with the Roar expers? Let us know your tips below: Who will win, what the margin will be, Norm Smith Medallist and first goal scorer. READ OUR FULL EXPERT TIPS ARTICLE

Tom Lynch somehow missed what looked to be the easiest of goal scoring opportunities against Geelong last month. However, it was Lynch and his Tigers team who had the last laugh with a comfortable 57-31 win.

‘She has nothing to do with the Richmond footy club, apart from being a supporter.’

The 2020 grand final promises to deliver much but is couched in the most unfamiliar of circumstances.