Richmond star Dustin Martin is in double trouble from the AFL after losing his cool in the loss to GWS.

He will come under video scrutiny for a hit well off the ball in the second term of Saturday’s clash at Giants Stadium.

The incident cost the Tigers a free kick and a goal.

Separately, the AFL could ask Martin to explain a couple of incidents where he flipped the bird to an opponent and also imitated snorting drugs.

The speculation is that the drugs sledge was directed at Shane Mumford, who was suspended for the opening two games this season after a video emerged of him snorting white powder.

At worst, Martin could be suspended for the off-the-ball hit and also fined for the gestures.

It means a worrying Monday for the Tigers, who have lost their last two games and could be without their Big Four for next Saturday’s away game against Port Adelaide.

They have already lost Alex Rance for the rest of the season with a knee reconstruction, while Jack Riewoldt has a wrist injury.

Captain Trent Cotchin also hurt his hamstring in the GWS loss and now Martin might also be sitting out the Power clash.

GWS tagger Matt de Boer sat on Martin, restricting him to 15 disposals, and clearly the attention did not impress the Richmond midfield ace.

Tigers coach Damien Hardwick was also frustrated and wants the umpire to keep a closer watch on tagging tactics.

“Protect the ball-carrier, is what I’m saying. Don’t get me wrong, De Boer did a terrific job, but geez. I’m certainly frustrated,” he said.

“I’d be interested to see what the umpiring fraternity says about it.”

The Saints knocked off Richmond comfortably in Round 4 in what was a strong team performance overall. While the reigning champions looked a shadow of their former selves in the early part of the season, they were made to look amateurish by a St Kilda team with a purpose-built plan to withstand pressure and attack. […]

Coach Damien Hardwick has warned Dustin Martin won’t be Richmond’s panacea as the struggling Tigers prepare to welcome back their biggest star against St Kilda next week. 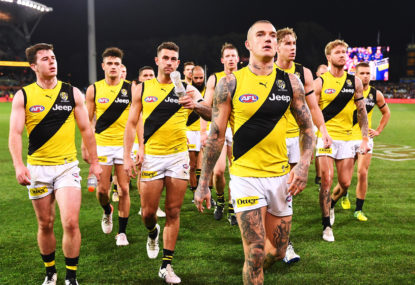