For the first time in my lifetime of watching footy, I have become genuinely concerned about the future success of the game.

Those who run the AFL must act now to save the game.

The season so far has produced upset after upset, creating immense unpredictability and proving impossible for tipsters.

Yet in a season where the first three rounds should be celebrated and fans should be filled with excitement, many are quickly losing faith in the AFL, left confused and furious towards the officiating.

Claims that the footy is unwatchable and the AFL is ruining the game are spreading around social media like wildfire.

Here are five things the AFL needs to do now to save Australian rules from becoming unwatchable.

1. Consistency on the punching stamp-out
When James Sicily and Jaeger O’Meara gave away free kicks while playing the Bulldogs in Round 2, the AFL world – non-Hawthorn supporters included – were left scratching their heads.

Both frees were for open-handed pushing and shoving that is seen in almost every game, and has been for as long as I’ve been watching footy.

These ridiculous frees came at a crucial time in a quarter that became more heavily influenced by the umpires than the players themselves.

Yet the AFL came out and gave these decisions the all clear, following up by informing clubs that they would continue to pay them to stamp out pushing and shoving.

So why then, in Round 3, did numerous incidents of an almost identical nature not result in a free kick?

Either you want to go hard on this issue to eliminate it from the game quickly, or you don’t. Make up your mind.

2. Fix the rule about contact below the knees
When Tom Phillips desperately dived on a loose ball in the grand final replay on Saturday night, it should’ve been a brilliant example of hunger for the footy all of the aspiring AFL stars around Australia.

But it was free kick against him.

This rule was initially introduced to discourage players from sliding in late and potentially injuring their opposition’s knees or lower legs.

But Patrick Dangerfield voiced on Twitter what every AFL fan was thinking.

The AFL needs to either scrap this rule, or redefine it to prevent more disgraceful calls like the one we saw in Round 3.

Whether or not you thought St Kilda’s breach against Freo in the dying seconds was intentional, the warning needs to be scrapped.

St Kilda were within five points of the Dockers with just eight seconds left, and had an extra in the forward line at the bounce.

This could have been a tactic for two reasons.

Firstly, on the off chance it goes unnoticed, the Saints have an extra marking option inside 50. Or the fact the ball has to be thrown up after a warning rather than bounced saves precious seconds.

To avoid exploitation of the rule, get rid of the warning.

This may seem like a minor change that will have little influence on fans, but given the new 2019 rule changes were met with disapproval from many fans, it’s important they get them right early.

4. Bring back the old interpretation of holding the ball
Hearing half of the crowd at a footy game howl ‘BALL!’ in unison is a beautiful part of the atmosphere of going to the footy, and should generate healthy passion in fans when a call doesn’t go their way.

Sadly, calls that fans don’t agree with are now just deepening the growing frustration towards the game’s officiating. 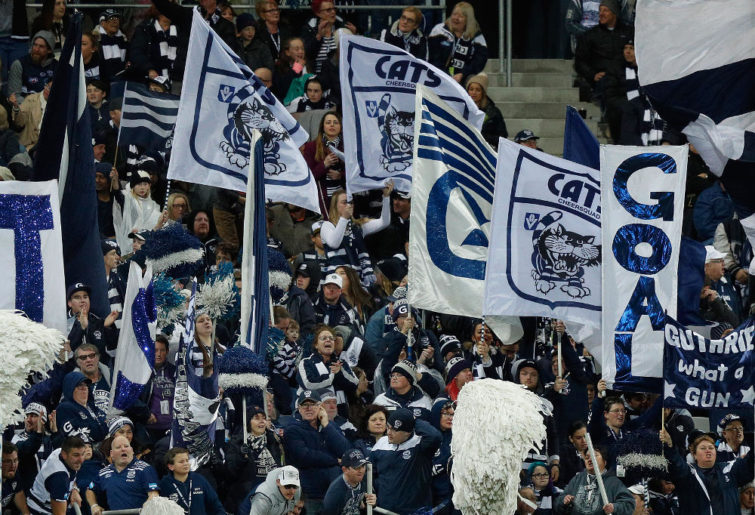 Nick Riewoldt said on SEN Breakfast on Monday morning that holding the ball calls were now a “lottery” and a “coin toss”.

Spectators are being left confused and dazed by unexplainable calls.

Bring it back to the basics: the interpretation we had ten years ago.

5. Be more consistent
Of course, umpires are only human and slightly different interpretations of certain occurrences are inevitable.

But in Sunday’s game between Hawthorn and North Melbourne, it was pretty clear from the get go that the umps weren’t going to tolerate any late whacks or contact to a player who had marked the ball, and weren’t afraid to pay a 50 to those that did.

So when Ben Cunnington wandered right into Chad Wingard’s protected zone as he was lining up for goal, and casually brushed the ball out of the Hawk recruit’s hands, the non-50 call became the most inexplicable call of the game. Mind-boggling.

Inconsistent umpiring has been a feature every round of the season thus far, this glaring example being just one of many.

These five things need to be urgently dealt with by the AFL to quickly mend the relationship between itself – the governing body – and fans that have been in love with the game for their entire life.

If this doesn’t happen soon, the damage could be permanent.