Essendon still have the list to challenge for the premiership

It might be a bold statement after just four rounds of the season, but I’m sticking by it.

What I saw on the weekend should give every Essendon supporter hope for the year ahead. Coming into their Round 4 fixture with the Brisbane Lions, not a lot of people were giving Essendon much of a chance of upsetting the much improved Lions side.

Under Chris Fagan the Lions had been playing entertaining and pulsating football for the first three rounds and were seen by many as the best side in the competition. They have recruited wisely, with Lachie Neale and Lincoln McCarthy being the two standouts. They had defeated West Coast, the reigning premiers, and have taken care of sides that just missed the eight in North Melbourne (away) and Port Adelaide. So taking on an inconsistent Essendon side was seen as just another stepping stone on their road back to AFL respectability, correct?

Well, yes and no. As a diehard Essendon fan I was quietly confident of our chances of grabbing the win, and this was based on our ball movement picking up substantially against Melbourne in Round 3. We were starting to replicate the free-flowing run and dare from the backline that was so prevalent in the last 14 rounds of the 2018 season. And I was looking at the Lions side and, as impressive as they have been, their relative inexperience at the MCG was giving me confidence that the Bombers could get the job done.

Now, I know what you’re going to say – that this Lions side are a different beast in 2019. But so are the Bombers. We have learnt how to be that aggressive defensive and counter-attacking team that is best suited to our team structure, and when teams don’t lock down on our link players like Adam Saad and Conor McKenna we can cut anyone to smithereens.

Our midfield, when led strongly by Dyson Heppell and Zach Merrett, is vastly underrated and our forward line has taken multi-pronged to a whole new stratosphere. If we are allowed to play the football that we have shown over the last two weeks, who can beat us? We have already shown last year that our best stacks up against the rest, with our four losses in the back half of 2018 coming against the top four.

And this was all achieved without our 65-goal forward from 2017, Joe Daniher. It’s time people start seeing the potential havoc this team can cause on the rest of the competition. I know I’m convinced. The first half of our game against the Lions was a super takedown of a team that was full of confidence heading into the match. Imagine what Essendon can do to sides with their tails up? 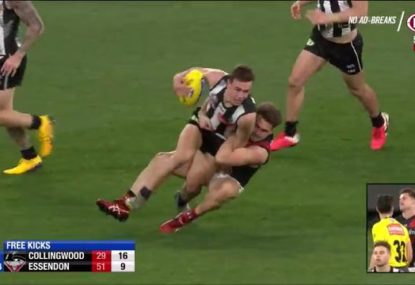