Congratulations to Perth Glory on winning the premiers plate.

They have played beautiful football over the course of this season and have been the most consistent team on a weekly basis, which is reflected in the fact that they have clinched it with two games to go.

But what’s the vibe in the changing rooms now that they have secured the trophy? Will they go easy in their last two games, knowing that they’ve locked down top spot? It is something the players can’t be told to do – you can’t expect a player to go as hard as they can after lifting a trophy they’ve been craving for so long.

The atmosphere was beautiful at nib Stadium, but it was only on Sunday night – will they have had enough time to recover? Tony Popovic has spoken about the strength of his squad, but will they have the will to go 100 per cent? Obviously they have Popovic, who is one of the best motivators in the league, but it will take more than the coach.

Meanwhile, Sydney FC shared the spoils with Western Sydney Wanderers in a crucial derby, which makes this game all the more important for the Sky Blues. If they were to lose or draw this clash and if Melbourne Victory were to win, Victory would move into second place. Gone would be Sydney’s one-week rest and automatic semi-final qualification, and they’d have to play in the quarter-finals. It would also mean they would not be able to play a semi-final at home. They could really do with a rest as the ACL games coming up are crucial despite their awkward timing.

The talk of the Sydney fans has all been revolving around Alex Brosque. The 35-year-old has announced he is intending to retire at the end of the season. He has said it is the right decision for his family, and I will be writing an article about that over Easter.

Michael Zullo is still out with a pulled hamstring, and it is likely he will be fit for their last game of the season against the Newcastle Jets. He could play, but in this part of the season Steve Corica won’t be taking any risks.

Luke Ivanovic is also not in the squad, and this is because he is playing with the NPL team now. Anthony Caceres will most likely be dropped for Siem de Jong, and with Alex Brosque still a bit injured, it is most likely that he’ll be replaced with Reza Ghoochannejhad.

Unfortunately for Perth Glory, they now have quite a few players out with injuries and tiredness. Chris Ikonomidis remains unfit with his dislocated shoulder, Jason Davidson is out with a knee injury and Juande is out with a groin injury. Andy Keogh and Dino Dulbic are being rested. This means a lot of change.

Alex Grant, a centre-back capable of playing left back, will most likely replace Jason Davidson in left-wing-back, and Tomislav Mrcela is capable of replacing Dino Dulbic at centre-back.

As for the centre-midfield, Jake Brimmer has shown he is capable of playing well in that position and will almost definitely place Juande. Andy Keogh can be replaced with Fabio Ferreira who is a winger, otherwise Tony Popovic can go with a more direct replacement in Brendon Santalab, with the latter being the more likely option.

This will be a tight game, but I’m struggling to think which team will win it. Will Perth’s tactics prevail or will Sydney’s one day of extra rest be what they need to take home the victory? The two key players for each of the teams are Milos Ninkovic and Brandon O’Neill and Diego Castro and Neil Kilkenny, and one of those four players will pick up the man of the match award. Joel Chianese and Siem de Jong will both score.

A number of changes have been made to the A-League fixture to accommodate the Asian Champions League campaigns of Perth and Sydney FC. 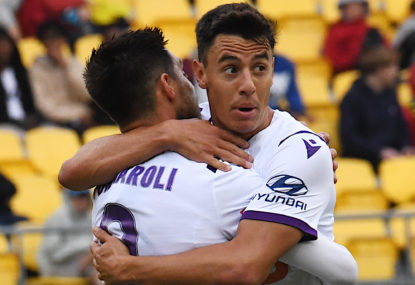