The HCT World Championship decklists are surprising, but not for the reasons you think

The most coveted event on the Hearthstone esports calendar is upon us, with the HCT World Championship set to take place in a week’s time in Taiwan.

Decklists for all 16 competitors were released yesterday, with this particular round of submissions particularly intriguing for two reasons.

The first being that this is the last Hearthstone event to be played under the conquest format, meaning the four-class suite will soon be a thing of the past.

More interesting, however, is the fact that this World Championship is being played so soon after the launch of not only a new expansion, but a new standard year.

Where 2017’s championship in Amsterdam saw the culmination and mastery of six expansions play out, we go to Taiwan with a barely settled metagame.

Here’s a brief look at which competitor is bringing what to the event.

There’s a lot to break down here and, as always, a fair few surprises.

But which curveballs are genuine headscratchers and which ones shouldn’t be a surprise at all?

Let’s have a look at some of the biggest questions to come out of the decklists and work out which surprises are actually worth raising your eyebrow at.

Where is Token Druid?

Hop on to any netdecking site and you’ll see one deck archetype atop the list; Token Druid.

After a brief fit over Bomb Warrior, the wider ladder community seems to have settled on this minion-heavy menace as their deck of choice – so why are only two players bringing it to HCT?

The simple, if unsatisfying, answer is that its winrate dips significantly at legend rank, with its match-up against most Rogue decks in particular proving poor. With Rogue always on track to feature heavily, that meant Control Warrior (a hard counter) was always going to appear too and Token Druid’s winrate against that deck isn’t extraordinary either.

That creates a situation where a large swathe of competitors will have half of their lineup comprising decks Token Druid won’t necessarily fare well against, making it too pedestrian to risk bringing in the minds of many competitors.

Verdict: Not a surprise.

Where is Mech Paladin?

Did it emerge too recently? Is it just a fad? How did the fastest rising (currently ranked second best) deck in the game end up virtually absent* from HCT?

(* – excluding Roger’s absolutely bonkers Control Paladin deck that nobody can make sense of.)

Mech Paladin’s conspicuous absence from decklist submissions actually makes a hell of a lot of sense.

In sport, they say you can only beat who’s in front of you – and that’s very true with ladder decks too. Ladder is filled with the aforementioned Token Druid right now, as well as Bomb Warrior.

Guess which deck farms them both? Mech Paladin. Why isn’t it being submitted? Because it has a tough time against virtually anything else.

The Harlem Globetrotters enjoy an immaculate winrate partly because of their sublime skill, but mostly because they always play the hapless Generals. Mech Paladin is very much in the same boat, arguably benefactor of circumstance moreso than innate strength.

Much like the Globetrotters would flounder if inserted into the NBA playoffs, Mech Paladin would’ve been brushed aside here too.

Verdict: Not a surprise.

All but one of the 16 players are bringing a Rogue deck to HCT (with that one, of course, being Roger), with the class’ dominance – especially at higher ranks – making this no surprise at all.

What has made waves, however, is the fact only seven of those 15 Rogue decks include powerful legendary Heistbaron Togwaggle. Easily one of the top five most powerful cards from the latest set, Togwaggle is an outrageously flexible matchwinner who is also stunningly cheap and easy to activate.

I’m no HCT-calibre player, but I reckon his exclusion really puts Tempo decks on the clock against the Control-oriented Warriors and Shamans a lot of people are bringing.

With five players opting to bring both Control decks to Taiwan, I don’t think the ban phase will be enough to see them through. This certainly has me taken aback.

Why are more people running Control Warrior over Bomb Warrior?

Most sources place Bomb Warrior as the third-best deck in Hearthstone right now, with Control Warrior barely scraping in the top ten at ninth.

So a few people have thrown by the fact only two of the 13 players bringing Warrior to the tournament have opted for the Bomb-based package.

Again, however, this is all to do with Rogue. It’s no secret Bomb Warrior performs strongly against the current iteration of Tempo Rogue, but what’s not as well known is that Control Warrior just does it so much better.

With Archivist Elysiana and Baleful Banker enough to outlast almost any deck in the fatigue stages, it naturally becomes the safer choice if you know Warrior is going to be at the event in some way or another.

If you’re thinking of disenchanting Wrenchcalibur now though – just wait. Control Warrior may do what Bomb Warrior does good better, but it also suffers from a lot more virtually unwinnable match-ups.

I’d keep climbing with the less polarising Bomb Warrior on ladder for now.

Verdict: Not a surprise – but don’t change how you play just yet. 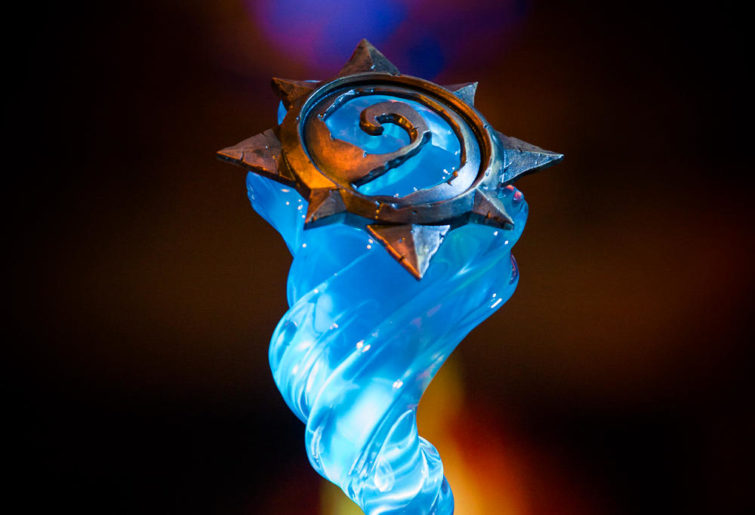 What’s with all the Shaman?

This is something I’m struggling to get my head around. Not only we do we have five players bringing Shaman, we’ve got precisely zero Murloc or Big Shaman decks (considered to be two best), instead seeing two different kinds of Control Shaman and even a Midrange Shaman for good measure.

The data on this class is all over the place, but it does make for puzzling reading you do take stock in it. Control Shaman allegedly cannot beat Summoner Mage at all, struggles badly against both Warrior archetypes as well as Hunter, and only boasts respectable winrates against Zoolock and Rogue.

Is that the plan? Are they going to ban Jaina or Garrosh and hope to farm Gul’dan and Valeera?

The Shaman quintet hopefully know something we don’t, because this could be meta-altering if their supposed gamble pays off.

So what does this all mean?

In the end, as surprising as some of these decklists may be, there’s no telling what plot twists await us once things actually get underway.