Time for netball to step up

In the article, Briony acknowledges what many of us already know: when it comes to women’s sport, netball has been a leader for many years.

For decades netball has been developing pathways for women and girls to play, giving plenty of young women the opportunity to compete at an elite level domestically and also represent Australia on the world stage in world cups and at the Commonwealth Games as part of one of the country’s most successful sporting teams, the Diamonds.

More significantly, because netball is a sport whose numbers are dominated by women, elite-level netball is well ahead of its competitors in thinking about issues like pregnancy and child care, with new provisions included in the most recent iteration of the Suncorp Super Netball collective bargaining agreement including a maternity leave scheme.

I would argue that the inclusion of these provisions has also pushed other sports to begin having these sorts of conversations with its athletes.

However, some have taken aim at Briony for comments she has made about other women’s sports.

“The women’s competitions which have grown rapidly in recent years have a long way to go to match the system netball has created over a very long period of time,” Akle wrote, suggesting that while some of the newer elite competitions for women like the AFLW and WBBL have had rapid success, they may not have the well-established and entrenched pathways that netball has.

It may look like Briony criticised other sports, but I think her intention was to highlight to the administrators, leaders and fans of netball advocating for their sport.

Briony has touched on a key point, which is the need for netball to do a better job at tooting its own horn so that it continues to grow and compete against some of these other codes, many of which have more funding and resources than netball does.

Australia’s national netball team, the Diamonds, are preparing for a World Cup in 2019. (Photo by Renee McKay/Getty Images)

Fortunately netball has a very good story to share.

This means that while other sports are in the process of building pathways and ensuring that girls have the opportunity to play their sport between the ages of 12 and 18, netball’s pathways are already there and producing outstanding players.

Briony calls out one of these players, Paige Hadley, in her article.

Paige’s first opportunity for representative honours came in 2004, when she was selected in a local representative side for the state age championships.

After four years at that level she played a year of state league and the following year represented New South Wales for the first time, playing at the under-17, under-19 and under-21 levels.

Many of you know how the story ends, with Paige continuing to develop as an elite player, representing the Swifts and recently being added to the Diamonds squad in a World Cup year.

As well as exceptional pathways, netball also has an exceptional domestic competition which is set to begin in just over a week.

Super Netball begins its third season this year, and for those of you who have never been to a game, I encourage you to do so.

The competition is fast and entertaining and the clubs have all worked hard to produce an exceptional match-day experience.

Some of the best players in the world compete in this league, including Kim Green, Jo Harten, Caitlin Bassett, Geva Mentor and Romelda Aiken. 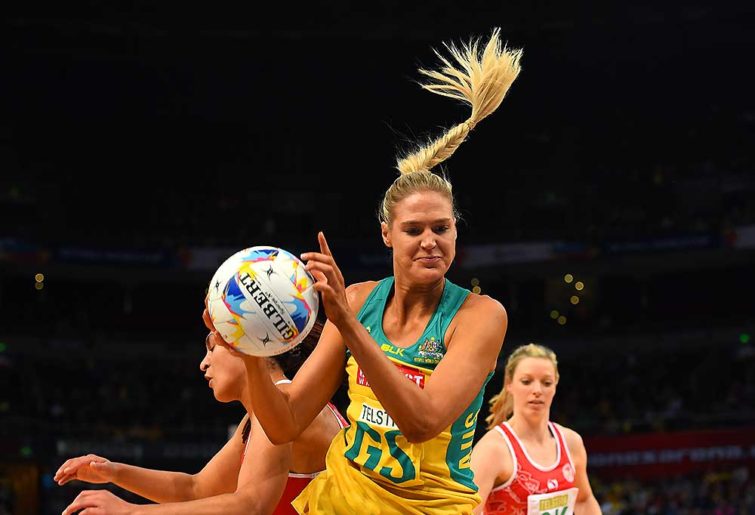 Caitlin Bassett in action for the Diamonds. (AAP Image/Dan Himbrechts)

And with the Diamonds set to travel to Liverpool to compete in the World Cup this year, I’m confident we will see the competition rise to a new level.

I applaud Briony for her commitment to the sport she loves so much and for pushing its participants to advocate for their game, particularly in such an important year for the competition.

A new collective bargaining agreement is also due before the 2020 season.

Plus, with the broadcast deal expiring at the end of the 2021 campaign, the numbers on television will be crucial over the next three seasons.

Over the past few years we have seen heroines emerge in the women’s sport space – the likes of Tayla Harris in the AFLW, Ali Brigginshaw in the NRLW, Ellyse Perry and Alyssa Healy in the WBBL and Sam Kerr for the Matildas.

My hope is that we see a similar heroine emerge for netball this year.

Fortunately for the sport, they have plenty of talented women who can help propel the game to new levels.

So the first official stamp has been placed by Stacey Marinkovich as head coach of the Australian netball Diamonds team. The 2020-21 Diamonds squad…

This weekend the Australian summer will come to an end, and with that comes hope that there will be relief for large parts of…

As have so many sports, netball is rallying its troops to support the ongoing bushfire appeal. The result is an all-proceeds-to-charity pre-season game scheduled…

New Zealand have ended Australia's dominance of the Netball World Cup by knocking off the Diamonds 52-51 in an absorbing final in Liverpool. Embarrassed…

So, you're keen to watch out Diamonds go after what would be an incredible twelfth Netball World Cup title - great! But the big…