Monte Carlo ATP World Masters 1000 is the only one of the nine ATP Masters tournaments which does not have a mandatory player commitment.

Yet all top players opt voluntarily to play this prestigious event which is one of the most followed worldwide.

Rafa had won as many as 11 titles here which is the most wins for any player at a single tournament. Only Rafa himself had equalled it, with 11 wins each at the French Open and the Barcelona open. He has played 12 finals here which is also a record. Rafael Nadal at Monte Carlo masters has a winning streak of 46, 11 titles, eight consecutive titles, nine consecutive finals all of which are stand-alone records.

He also has played the most matches and won the most times, more than any player. Amazing indeed.

Now let us come to a review of the 2019 championships.

In the 2019 edition – with the exception of Roger Federer – all the top players like Novak Djokovic, Rafa, Dominic Thiem, Sascha Zverev, Tsitsipas and former champion Stan Wawrinka were there.

Only Rafa (11), Novak (2) and Wawrinka (1) had seen success here. The questions asked were will one of these three win again? Or will it be a new champion in perhaps Dominic Thiem.

Frankly it did not seem that apart from maybe Novak, no one could challenge Rafa here, and that too only if Novak is at his very best. 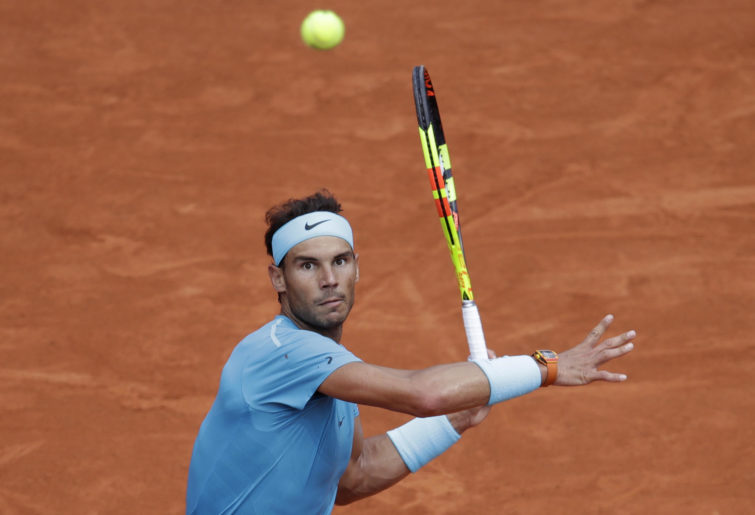 Novak started his campaign against Philipp Kohlscreiber who had defeated him at Indian Wells 2019. Novak rallied to win the match in three sets and then won his next match versus Taylor Fritz with ease.

However in the quarter-final he bowed out to Daniil Medvedev for whom it was the first ever win versus a world number one and the first ever entry into a Masters 1000 semi-finals. This win came after defeating Stefanos Tsitsipas in the previous round and while Medvedev had earlier had one top ten win in 12 matches, this was two in two for him.

Medvedev’s semi-final was against Dusan Lajovic. Ranked 48 in the world Lajovic upset David Goffin first and then Dominic Thiem as well before defeating a qualifier L Sonego. This made him the lowest-ranked semifinalist at Monte Carlo since 2005 and it was without losing a single set. Lajovic had not finished yet. He defeated Medvedev in the semi-finals, also in straight sets to enter the finals.

Meanwhile, Rafa Nadal had a breathtaking start with a 6-1, 6-1 defeat of Bautista-Agut who owned two wins over Novak this year. He followed that up with a 6-4, 6-1 demolition of Dimitrov before winning his quarter-final against Guido Pella 7-6, 6-3.

This was the first time Rafa was tested and in fact Pella at one point of time was serving for the first set. However once Rafa broke back to make it 6-6 and swept the tb 7-1 , the second set was an easy one for the champion.

Rafa’s semi-final opponent was Fognini who had a 3-11 career head-to-head against the great player. Fognini had a tough draw. He defeated Rublev in the round of 64 and got a bye in the next as Giles Simon retired. The next match was against Sascha who disappointed yet again in a 6-7 1-6 loss. In the quarter-finals a fantastic comeback saw him win 1-6, 6-3,6-2 after Coric appeared to be in complete control. For Fognini it was his second Monte Carlo semi-final and the previous one he had lost to Novak.

In a stunning upset, Fognini defeated the Champion 6-4, 6-2, in a match where he reeled out winner after winner and was helped by what Rafa himself said “my worst match in 14 years”.

It was Fognini’s fourth win over Rafa and it brought to an end a 18-match and 25-set winning streak at Monte Carlo. Incredibly Fognini had three set points on serve for 6-0 second set and Rafa saved all of them, broke Fognini and held serve to raise hopes of a miraculous comeback. Fognini was however not to be denied and he held serve to complete a famous win and enter his first ever Masters 1000 final.

Who would have imagined that the Monte Carlo finals would see a 13th seeded Fognini meet an unseeded Lajovic?

Well, often one sees a player beat one of the top three (Federer, Novak and Rafa) and the euphoria is short-lived with the next match a loss.

However Fognini kept his cool and his nerve to win 6-3 6-4 in just 98 minutes to lift his first Masters 1000 and become the first Italian to win a Masters 1000 title.

He was the lowest-ranked winner (13th seed) since Gustavo Kuerten, also the 13th seed had won in 1999. It was the first time in three years that anyone had defeated Nadal enroute winning a clay court tournament after Pablo Cuevas at the Rio Open in 2016.