Has Essendon really turned a corner? We're about to find out

Just weeks since the calls came for James Hird to lead Essendon out of their early-season funk, the Bombers have won three on the bounce and join eight other teams sitting at 3-2.

It’s hard to make sense of their season so far. As disastrous as the first two weeks seemed at the time, both the Giants and St Kilda have proven themselves to be two of the better-performed teams after five weeks. Wins against a terribly out-of-sorts Melbourne, Brisbane and North Melbourne only further muddied the waters.

So, what changed in the last three weeks? For starters, scoring and accuracy on goal has sky-rocketed. Essendon scored a total of 105 points in the first two rounds, with every inside 50 looking like pulling teeth. Since then they have averaged 119 points per game, with their lowest score in that period being 112 against the Lions.

Since kicking 14.21 in total across rounds one and two, Essendon has piled on 54.34 in the three wins.

Two crucial players to the resurrection have been Anthony McDonald-Tipungwuti and Orazio Fantasia. The eye test tells you everything you need to know; both are quick, clean ball users and constant threats around goal. But the numbers tell an alarming story.

McDonald-Tipungwuti did not even hit the scoreboard in the two losses and registered one score involvement in each match. Since then he has kicked 13.1 and averaged nine score involvements per game, including a scintillating seven-goal haul against Brisbane.

Fantasia’s numbers aren’t quite as drastic but nevertheless highlight his importance to the side. Riddled by inaccuracy earlier in the year, registering 0.7, he has kicked 8.1 since Round 2 and averaged eight score involvements in the wins. When he and his running mate are on song, Essendon plays at their best.

Aside from individual brilliance, as a team Essendon has returned to doing the basics well. In their three wins, they have had a positive differential in both contested and uncontested possessions, as well as the tackle count and marks.

Essendon must now tackle their love-hate relationship with the MCG. Whilst the open spaces allow their running game to take flight, and may have kick-started their season this year, they won just one game of out eight at the home of football in 2018. During the offseason the hierarchy at Essendon deemed that their biggest strength proved to be their biggest weakness, as the running game did not hold up against the top sides.

Losses to Collingwood, Hawthorn, Richmond (all twice) proved to be detrimental to their finals aspirations, and the only win at the MCG came against Geelong, who have struggled to match Essendon’s speed in recent years.

Put simply, scoring from the back half, as Essendon’s fast game style facilitates is unsustainable. Zoning and team defence means that crafting a game-style around taking the ball the length of the field is too difficult, let alone converting inside 50s into scores.

The Adelaide Crows have proven that sooner or later this method can be debunked; it was lethal for the best part of two seasons (2016-17) but since crumbling in the 2017 grand final they have struggled to find a plan B.

This may explain why the Bombers played such a slow game in rounds one and two and looked beyond woeful. Run and gun could only take them so far, and they proved that in 2018 they couldn’t match it with the best. 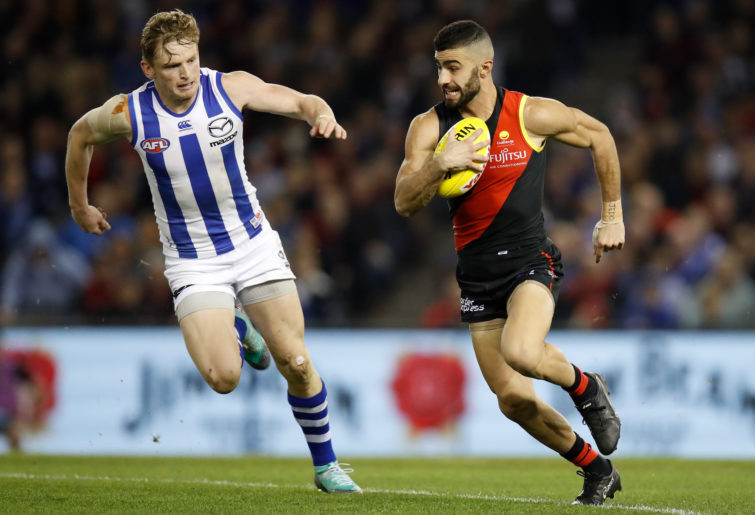 The return of Joe Daniher along with the expected inclusions of Devon Smith and David Zaharakis means that the Bombers will be as close to full strength as they have been since Daniher was ruled out early in 2018. Now, the upcoming fortnight of tough games will serve as an excellent examination period.

Their opponents Collingwood and Geelong have established themselves as contenders again in 2019 with elite midfields and potent forward lines to match.

Conversely, the Cats have excelled at the contest (fifth in the comp with 153.2 per game) but rank low in uncontested possessions (15th with 206.4). Essendon is mid-table for both counts and can’t claim a significant advantage over either side.

Five weeks into the season and we can see that the competition is going to be as tight as ever. 5-2 or even 4-3 looks a hell of a lot better than 3-4. But more than that, wins against two quality sides will send a message to the competition that the Bombers may match the lofty 2019 expectations.