Red Bull Racing entered the 2019 season with much to prove, but it’s difficult to tell where the team stands after three hard-to-read rounds.

The four-time championship-winning team has put its reputation and championship credibility on the line with its switch from long-time power unit partner Renault to Honda. The move was of course in part driven by the high acrimony of the Anglo-French relationship in the turbo-hybrid era, but performance was certainly the decisive factor.

Renault had been saved the blushes of being the least powerful and least reliable engine in Formula One only by Honda. Honda’s undercooked 2015 entrance to the sport unleashed a world of woe on then partner McLaren — though Woking undoubtedly shared some of the blame for the package’s poor performance. However, the Japanese marque’s improvements with Toro Rosso in 2018 were strong enough to convince Red Bull Racing it would be no worse off if it were to make the change.

Indeed some observers suggested Honda had surpassed Renault for power late last year, and the number of engine-related Red Bull Racing retirements hardly inspired confidence that Viry-Chatillon was on the verge of a breakthrough.

So the change was made, turning Red Bull Racing into the de facto Honda works team and leaving the Renault factory squad, still a midfielder part of the way through its rebuilding process, as the highest-placed outfit to be powered by its engines, almost certainly guaranteeing it would be winless, if not also absent from the podium, for a minimum of 12 months.

And Red Bull Racing appeared to revel in the idea. Barely a day of the preseason passed without high praise for the Honda engine, and Red Bull motorsport advisor Helmut Marko was moved to tell Germany’s Motorsport-Magazin that his team would “win at least five races”, one more than the four it achieved in 2018.

It was a bold prediction that relied heavily not only on Honda being no worse than Renault but also on the team adapting new the new aerodynamic regulations and its new engine partner seamlessly, and after three rounds — albeit a small sample size — Marko’s forecast is beginning to look ambitious at best.

The team has so far been 0.754 off the pace in qualifying, and though Max Verstappen has managed to snare a podium and a pair of fourth-place finishes, all haver been somewhat opportunistic, with Ferrari wildly off the pace in Australia, Sebastian Vettel spinning in Bahrain and the Scuderia butchering its strategy in China.

And though reliability has been nowhere near as catastrophic as that of the Renault-powered cars, Honda is introducing its first of three new internal combustion units to rectify a quality control issue it found in Daniil Kvyat’s Toro Rosso during practice at the Chinese Grand Prix. This makes penalties likely for all four Honda-powered cars, particularly given both Toro Rosso machines had already taken their second ICE units in China.

Further reflecting on the Chinese Grand Prix, team principal Christian Horner tacitly admitted that the RB15 package lacks only in engine power, noting that it was only in the third sector of the Shanghai International Circuit, which comprises the sport’s equal-longest straight, that his team was lacking.

In other words Red Bull Racing is not yet the complete race-winning package — and though these may be early days, remember that one of Red Bull Racing’s four 2018 victories was an opportunistic snatch and grab in China, so already the team is behind on Helmut Marko’s five-win-minimum goal season-on-season.

If you consider too that another of the four was a fortuitous victory in Austria, the prospect of beating last year’s tally should’ve appeared grim even before the car was first wheeled from the garage for preseason testing.

“Helmut obviously likes to take an optimistic outlook,” Horner conceded after the Chinese Grand Prix. “But from a team perspective we have never set any targets in terms of race victories. Our goal is about closing that gap.”

The good news is of course that on the no-worse-off test, which ties in with Horner’s goal to close his team’s years-long deficit to the front of the field, Renault has suffered a torrid start to the season with three unreliability-riddled grands prix. 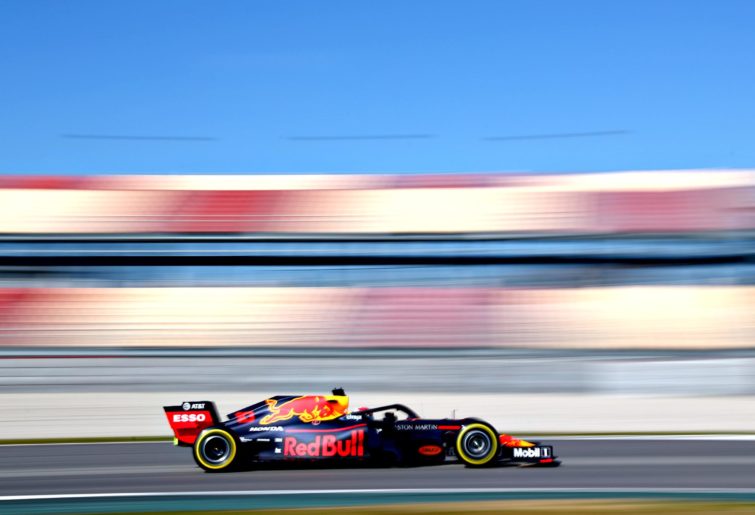 It took until the third round for either of the works Renault to make it through qualifying without encountering a power-limiting software issue, but even so the Chinese Grand Prix was marred by another MGU-K-related issue on Nico Hulkenberg’s car, forcing the German into retirement.

Add that to the synchronised engine failures on both Hulkenberg and Daniel Ricciardo’s cars in Bahrain and the power unit failure that ended Carlos Sainz’s Australian Grand Prix and things do indeed seem no worse off for Red Bull Racing.

On the evidence of three rounds, Red Bull Racing-Honda is no closer to claiming a meritorious victory that it was in 2018, let alone five such wins. But that should never have been the test — RBR left Renault for the benefits of a works relationship in the hope it would be left no worse off in exchange, and on that simple metric the deal looks successful.

The team may well win races with Honda this year, just as it probably would’ve done with Renault, but it won’t be until 2020 and beyond that the true success of the relationship can be judged. Best the team doesn’t get ahead of itself before then.