How to ride a front-runner, plus five horses to back on Saturday

Anzac Day punters were treated to a smorgasbord of decent racing yesterday, with Gai Waterhouse once again saluting in the VRC St Leger at Flemington.

We saw two great examples of front-running rides at headquarters: the right way and the wrong way.

Let’s start with the right way. Luke Currie, in a rare ride for the Gai Waterhouse-Adrian Bott stable, gave Transact a perfect steer in the St Leger.

Over the 2800 metres, he went quick enough to deter mid-race moves and a sprint from the 600 metres, but not too quick that he didn’t have enough in the tank to hold them off in the straight.

Three races earlier, boom horse Super Seth went pop in the Anzac Day Stakes (1400 metres).
In a small field, Clayton Douglas was caught by surprise when he landed in front as they jumped.

He had no choice but to lead on the two-year-old, but then proceeded to butcher the mount from there.

It’s one thing to stack them up, but Douglas went far too slow in front and allowed his less talented rivals to stalk him at walking pace.

When the sprint went on, Super Seth was left flat footed and only plugged away to finish third.

If Douglas allowed his runner to bowl along in front, he would have at least taken some beating in the closing stages.

The winner would have at least needed to run a genuine 1400 metres.

So if you took the short price about the Anthony Freedman-trained colt, don’t stress. Forget that run because he’s going to be much better next time if ridden the right way.

And before we get into Saturday’s racing, I thought I would share a poem that was read at yesterday’s Anzac Day ceremony in Weipa, Far North Queensland.

It tells the story of how 180,000 horses who had served in the war carrying soldiers and supplies were shot and killed because they couldn’t be taken back to Australia and New Zealand.

Some were handed over to other nations, but the majority had to be left behind.

You can read the full poem here but here are a few verses.

So many stories have been told – heroic acts of horses
who double-backed the injured men and dashed through Turkish forces.
Then when the war was finished, all the troopers clapped and cheered,
but what about the horses, that they loved and so revered?

Their horse was friend and comrade, through the thick of war and thin.
The Aussie politicians wouldn’t let them come back in.
They said, “Because of quarantine, and massive costs involved,
you’ll have to leave your mounts behind.” The troopers’ cheers dissolved.

The war was done. The men could leave that nightmare combat zone,
but first, they had to take the lives of those who’d saved their own!
The younger mounts were volunteered to India’s command.
Those over four were shot, and left to perish in the sand.

The horses of the 3rd Brigade were killed in Tripoli.
They lined them up in olive groves, then shot them. Tears ran free.
Each marksman fired, and wished the horse had died while serving war,
to lay the blame on enemy – instead his own heart tore.

Something to think about, for sure.

Now, onto tomorrow’s racing and all roads lead to Brisbane for the beginning of the Queensland winter racing carnival.

A decent card has been assembled at Eagle Farm and before I preview some of those races, I want to warn people off backing a short-priced commodity in Redzel. 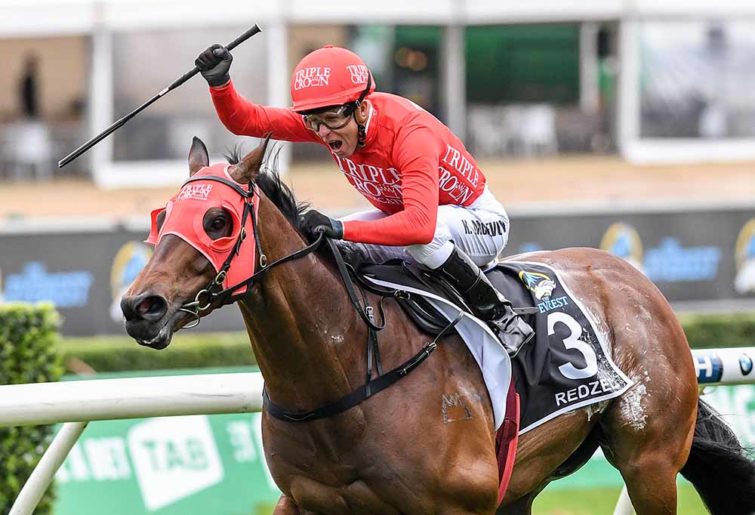 He’s currently $1.60 to win the Group 2 Victory Stakes and, on paper, he is the best horse in the race.

But there’s no way I would be backing him at that price.

The on-pace runner has been nothing but disappointing this preparation after his back-to-back wins in the Everest over the past two springs.

He has class on rivals, but he’s going to be exposed in a small field down the long Eagle Farm straight. I don’t know which horse will beat him, or even if he will be beaten, but $1.60 is not a price worth taking.

Here are five races on Saturday that provide some better value.

Track: Good 4 at time of writing
Rail: Out seven metres the entire circuit

Tomorrow he goes out as the $2.60 favourite and that looks to be a dangerous price, despite his current run of form.

Gold Ambition at the bottom of the list carries 54 kilograms and ran on strongly second-up behind the favourite last start.

Le Juge was given a saloon passage through the field, while Gold Ambition has to go around the field. He’ll be better for that run and is a genuine winning chance.

The Jason Coyle-trained mare Insensata has raced around Newcastle, Kembla Grange and Sydney her whole career.

She was a talented filly who struggled to find the right race last preparation. Some of her performances at Group 2 and Group 3 level were far from disgraceful, though.

Tomorrow, she meets a field that has enough speed in it so that she can position midfield, perhaps one off the fence.

Providing she doesn’t get too far back, she can outsprint her rivals. Local runner Shogun Sun is perhaps the biggest danger in what is a reasonably even field.

Track: Good 4 at time of writing
Rail: Out five metres the entire circuit

Race 4 at 1.50pm – $300,000 3YO Sires (1600m)
There’s some huge prize money on offer at Caulfield today as a result of Racing Victoria’s breeding promotion of horses that were sired in the state.

There’s an even-money favourite in this race called Tarwin from the Mick Kent yard and he looks to be an above-average type. He’ll carry 58 kilograms in this set weights race and he might not get it his own way on Saturday.

He’s a quality horse, but I’m going to search for some value in this high pressure race.

Saccharo was favourite last time out when beaten a long way by Tarwin, but I’m happy to give him a second chance.

He’s been competitive in most of his races to date and Damien Oliver is sure to give this son of Magnus every opportunity.

You’ll get a decent price about him tomorrow, so take the chance and hope the favourite runs into trouble down the straight.

Some of these are maidens, so it’s a huge prize money race for what looks to be a below-average field.

The favourite is the Matt Laurie-trained Prince of Sussex, who was an impressive winner at Bendigo last start, while the second favourite is Sartorial Splendor, who won his only race for John Sadler at Terang earlier this month.

I don’t mind a colt called Stand to Attention for the Corstens stable. He was beaten four lengths by Prince of Sussex at Bendigo, but made up a lot of ground, before sitting closer at Caulfield last start to be second in an eye-catching run.

The Corstens team won this type of race last year and they would have been setting Stand to Attention for this event. He could be double figures when they jump so is worth an each-way flutter.

Track: Good 4 at time of writing
Rail: In the true position

Race 8 at 4.10pm – $200,000 Group 3 Hawkesbury Gold Cup (1600m)
A strong field has assembled for this popular race and I’m keen on the favourite Archedemus for the Gwenda Markwell stable. This five-year-old gelding has been lightly raced and boasts five wins from eight starts.

He was somewhat disappointing last start, albeit in possibly stronger company, but still was only beaten two lengths in the Provincial Championship.

Drawn barrier five, jockey Corey Brown has options from the jump and I can see him sitting just off the pace in a stalking position.

Archedemus has never raced over the 1600 before, so that’s a question mark, but he’s got enough class to beat this field with 53 kilograms on his back.