There was never any doubt Luke Keary would be a pivotal player in the Roosters’ campaign for back-to-back NRL premierships.

It was proved again last night.

A concussed Keary missed the big Anzac Day clash with the Dragons, and the Roosters dodged a bullet.

The scoreboard doesn’t tell the real story. While a 20-10 win looked comfortable for the Roosters, it was far closer than that.

The Roosters big three at the back – Cooper Cronk, Latrell Mitchell and James Tedesco – missed their brilliant little play-maker.

With 66 per cent first half possession, and plenty of territory, the Roosters led by only 14-0 at the break.

Had Keary been there the scoreline would have been more like 26-0, and the game virtually done and dusted. 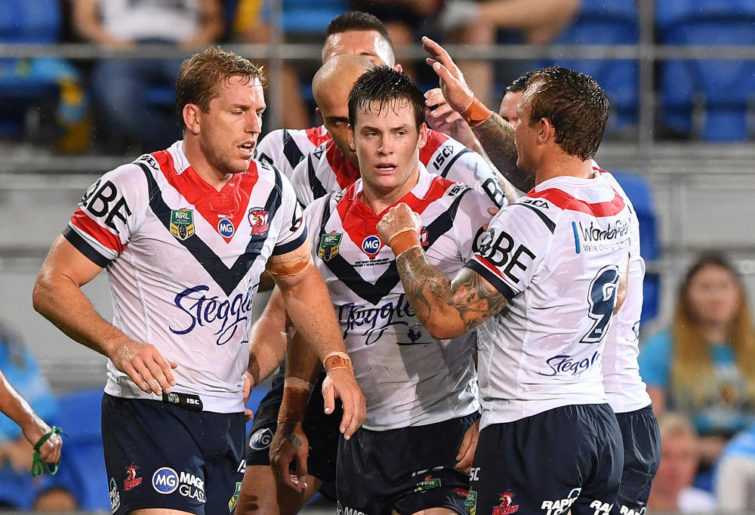 Worse than that, the Roosters didn’t score a point for 45 minutes while a Dragons side buoyed by a second wind piled on ten with tries to Zac Lomax and a spectacular 55-metre solo weaving run at speed from fullback Matt Dufty that gave the visitors a sniff.

With half an hour to go and 14-10, suddenly the Roosters looked ordinary, the Dragons were breathing fire, and the excellent 38,414 crowd came alive.

If it wasn’t for elementary Dragon mistakes, and rock-solid Roosters defence with hooker Jake Friend showing the way on 47 tackles, the Dragons would have been home and hosed.

The standout elementary mistake was Dragons prop Paul Vaughan with a big bust up the middle, only to fall over with no Rooster anywhere near him, and a try was lost.

But the clinching Dragon mistake was Dufty who lost possession on the first tackle inside his quarter line, that led to Siosiua Taukeiaho’s 77th-minute try to seal the Roosters’ win.

Dufty didn’t deserve such a mistake, he had been a leading light in the stirring Dragon fightback.

But Taukeiaho did deserve to be the one to eventually get the Roosters over the line, having bashed his way through a game-high 272 metres of power running in just 54 minutes on the field.

So the Roosters chalked up their sixth successive win in their best start to a season since 1999.

And in the process the two co-captains – Boyd Cordner and Friend – did what captains should do and lead from the front.

On the debit side the Roosters will await a scan today to see if Friend has re-damaged his shoulder. It’s an injury that has already cost him three games this season.

And welcome back Luke Keary for the clash with Wests Tigers at the SCG on Saturday week.