The Highlanders have romped to a 52-0 victory in a one-sided affair in Tokyo.

The Sunwolves made multiple changes for the clash. Grant Hattingh, Shuhei Matsuhashi and Fumiaki Tanaka returned to the starting line-up while Japanese skipper Shota Horie came onto the bench.

The Highlanders brought Luke Whitelock, Aaron Smith and Rob Thompson into the starting side as they looked for their second win on the bounce.

The match sprung into action when Highlanders lock Tom Franklin dived over in just the fifth minute to give the travelling side an early lead.

And when Tyrel Lomax crashed over just seven minutes later, it looked as if it was going to be a long night for the hosts.

The train kept rolling as Tevita Li was left unmarked on the left wing and he dotted down for the first of his two tries of the night.

Josh Ioane missed the conversion of Li’s try but then had a five-pointer of his own when he sold a big dummy and skipped through a hole in the Sunwolves’ defence. He converted his own try and put the Highlanders up 26-0 after 21 minutes. 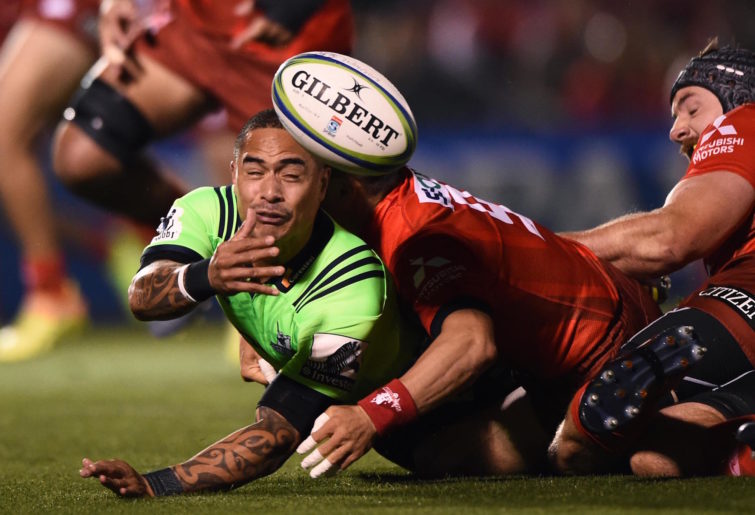 The Sunwolves just couldn’t find any answers, though, as hooker Liam Coltman got in on the act when he fell over the line from the back of a Highlanders’ maul.

Ioane had racked up 13 points for the half as the Dunedin side went into half-time up by a whopping 33-0.

The Sunwolves burst out of the blocks in the second half as they forced five penalties upon the Highlanders in the first ten minutes after the interval.

Former Rebels player Shota Horie then killed off all momentum the Sunwolves had built up as he put in a shocking grubber kick that rolled into touch, leaving Semisi Masirewa no chance to regather the ball.

Normal service then resumed as Li bagged his second of the night thanks to a Tei Walden kick that rolled towards the goal line before bouncing favourably for the left winger. Ioane added the extras to extend the Highlanders’ lead to 40 points.

The Otago outfit were in once again after taking a quick tap from a penalty on the halfway line. Aaron Smith put replacement hooker Ash Dixon through the line and the support play on the inside from Rob Thompson enabled him to score the Highlanders’ seventh of the evening.

The Highlanders had one more left in them though when a cross-field kick from replacement fly-half Bryn Gatland landed in the hands of right winger Sio Tomkinson, who had no problems in securing his second try of the season.

Despite the Sunwolves’ valiant efforts to record some consolation points, it was not to be as the visitors held the home side scoreless in a 52-0 demolition job.

The Highlanders now travel back to New Zealand and face the Chiefs next week.

The embarrassing loss means the Sunwolves still sit rock bottom on the Australian conference before travelling to Brisbane where they will meet the Queensland Reds at Suncorp Stadium next up.