We’re getting closer to that point in the season, the time where you’re able to start putting lines through teams as their chances of making the finals disappear as quickly as an Israel Folau contract.

This week saw many teams coping with this pressure and taking steps to get their season back on track, while others seemed to choke and have made things harder for themselves over the coming weeks.

So in such an important round, what are the key talking points?

Highlanders awaken!
The men from Dunedin have had a tough season so far and haven’t been able to find any decent rhythm.

After their two wins from the first two rounds they’ve only been able to pick up two more wins until this weekend when they tore the Sunwolves to pieces.

Having beaten their conference rivals, the Blues, last weekend they needed to string another win together and boy did they.

Of course the Sunwolves are not elite competition but in their penultimate season they have shown time and again that they cannot be underestimated. They’ve beaten the Tahs and the Chiefs and run the Reds, Canes and Blues very close.

But this weekend they had no answer at all to the intensity and the accuracy of the Highlanders. They ran in eight tries and, perhaps even more impressively, didn’t concede a single point all game.

In the remaining rounds they’ve also got a pretty good run in with really only two obviously tough games against the Lions and Stormers over in South Africa.

This is a great chance to not only pick up good points across the final seven rounds but to take some great momentum into the finals.

One of the most exciting aspects of the game for Highlanders fans would have been the way that the half backs are developing their partnership.

Aaron Smith has had a surprisingly quiet season so far and arguably has been the second best scrum half in the conference behind TJ Perenara and the number 10 shirt has also been an issue for the Dunedin team.

But on Friday Smith looked in good nick and his halves partner – Josh Ioane – really impressed. Speaking of which…

Josh Ioane – a bolter for the World Cup?
At the beginning of the season, the fly half position was an issue for the Highlanders. They had some good talent and experience sprinkled throughout their team but there was no real gun who was going to bring it all together.

In the early rounds, when Josh Ioane got his chances, he looked exciting at times but also error prone and inexperienced.

However in the past few weeks he’s really come on leaps and bounds. There’s still that experience missing for sure but you can’t fake that – it has to come with time. But he’s been able to find much more balance between his obvious individual skills and his ability to guide his team around the ground.

Against the Sunwolves this week he had a really good game with his own try and an assist as well as 10 points with the boot.

Yes, it was only the Sunwolves, and his side was dominant, but he does seem to be growing into the role very nicely.

While the top two fly-halves are still very obviously Beauden Barrett and Richie Mo’unga, Steven Hansen may well be interested in looking at Ioane as a backup.

Of course in players like Damian McKenzie, Hansen has a talent who can cover a few positions including No.10. But with McKenzie injured and out for the season and Ioane putting in improving performances he may well get Hansen asking some questions of his selection plans. 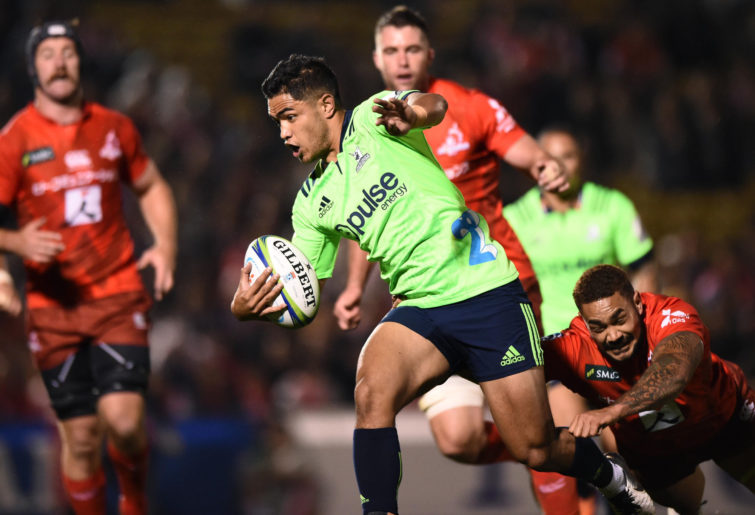 Ardie Savea – player of the 2019 competition?
Speaking of Hansen’s selection dilemas, surely he must have Ardie Savea written down in permanent ink. The flanker has been having the season of his career and this weekend put in another incredible performance.

Week in, week out he has been crucial for the Hurricanes as he’s made big tackles, stolen a lot of ball at key times and scored some cracking tries.

On Saturday against the Chiefs, his impact was best summed up by the try he scored. He originally stole the ball from the Chiefs all the way back near his own 22. He then ran hard and stayed in support as the Canes paceman flew away down the field and was there on the shoulder to take the off load and then bash his way the final few metres over the line.

He’s arguably the player of the competition so far and has surely got a starting place in the All Blacks plans.

When you look at some of the other top back rowers in the tournament there is daylight between them and Savea at the moment.

If the Canes are going to find a way to beat the Crusaders then they are going to rely hugely on Savea – he is crucial to their success.

Hurricanes really beginning to blow
While Savea has been on fire all season long, his side haven’t found the same consistent levels in the first 11 rounds.

They’ve been able to pick up plenty of wins for sure but many of them have been very close – less than six points – and in general the Canes just haven’t looked like they’ve clicked yet.

But on Saturday against the Chiefs it did look like this is changing. The men in yellow were in some really good form and having raced away to a 21-0 lead in the opening quarter of the match, they never looked in trouble even when the Chiefs found some rhythm.

One telling point was how comfortable the Canes looked in defence. They only had 39 per cent of the ball all game and so had to do a lot more tackling than the Chiefs – 162 tackles compared to 99 – and even though they did miss their fair share of tackles, they just seemed very calm and composed when they didn’t have the ball.

It was almost part of their game plan to deliberately let the Chiefs have the ball, confident in the knowledge that they could force the error and then punish them on the counter.

Their clinical counter attacking caused the Chiefs trouble several times with both Jordie Barrett and Ardie Savea picking up tries directly from Chiefs errors. It’s interesting to consider though – will this tactic work against the top teams in the competition?

While the Canes back line is full of incredible talent, the question still remains about whether they have the forwards to defeat the likes of the Crusaders?

Currently you’d say no they don’t but they’ve got a few rounds left to turn their pack into an even more effective machine.

Stormers know how to make a very little go a long way
The Stormers put in a really impressive performance this weekend against their conference rivals, the Bulls. In the end they won by just one point but when you look at the stats behind the scoreboard you can see what a good win this was for the home side.

The Stormers had just 42 per cent of possession and 37 per cent of the territory but when they got chances they took them.

Their defence wasn’t faultless but they made almost 80 per cent of their 158 attempted tackles and worked so hard when they were defending in their own 22.

Of course scoring tries is important and it feels good for players. But impressive defensive performances are all about attitude and the team as a whole.

This was an important match for the Stormers and the way in which they were able to work so hard for each other and come away with the win could have a real, lasting benefit for the club.

They’ve got some tough games over the coming weeks and the South African conference is so tight at the moment – just seven points separating top and bottom.

They’ve got themselves to third and are just three points behind the conference leaders, the Sharks.

The Tahs have far bigger concerns than who will replace Folau
Oh dear, oh dear, oh dear. The Waratahs are in trouble. Not because they are likely to lose their most potent attacking weapon for the rest of the season, but because the rest of the team as a whole are just not improving this season and continue to put in bad performance after bad performance.

Against the Sharks in Sydney they dominated in terms of both possession and territory but found new and curious ways to shoot themselves in the foot.

Jed Holloway put his hand up for “brain fade moment” of the game when he elbowed Thomas du Toit in the head and then just minutes later Jack Dempsey, said “You think that was silly? Hold my beer….” before getting sin binned for a dangerous tackle.

This left the Tahs with just 13 men for some crucial minutes and the Sharks punished them for the ill discipline.

But unfortunately for Tahs fans, the criticisms don’t stop there. The team showed that they have no ability to switch to a plan B and when they really needed calm heads their key players – especially the skipper Michael Hooper – just didn’t stand up.

Add to that the terrible missed conversion right at the end of the game from Bernard Foley that meant they missed out on a bonus point and it was a pretty bad day at the office for the men in blue.

What’s perhaps even more concerning is that this is not a new thing for the Tahs. The past four seasons have been pretty average and there has been little to no improvement. That’s just not good enough especially when you look at some of the talent that sits within the club.

That the Tahs are still the second best side in the Australian conference despite all of these issues should alarm and scare all Australian rugby fans because it is a sad state of affairs.

This talking point could easily refer to the Wallabies as well because if the Tahs are playing this poorly then things don’t bode well for the Wallabies either.

The Jaguares still fighting hard for a finals spot
The Jags put in a second half performance of real guts to get the win against the Brumbies early on Sunday.

Having led by just two points at half time they were only able to add three more points in the second half but crucially they kept the Brumbies scoreless in the final 40 minutes.

The Brumbies had plenty of opportunities and even had a man advantage for 10 minutes in the second half but the gutsy defensive performance from the show men from Argentina was inspiring.

They’ve moved themselves up into mid-table in the conference and have a big game next week at home against the Stormers.

They have to win this one before they then head off on a very tough tour where they could easily come back with one or even no wins at all.

If they want to be in the finals then they must win again next week and then target the final three games of the season.

Based on this weekend’s performance, they certainly have the spirit!