The A-League team of the week: Round 27

While there were some stunning performances in the final home-and-away round of A-League football, one couldn’t help but think a few teams failed to turn up for the contest.

That made the selection of the team of the week quite tricky; matching up individual performances against the quality of the opposition that they faced.

After much thought, these are the men upon whom I settled as the final A-League team of the week for 2018-19.

1. Glen Moss (Newcastle Jets)
On a night when his direct opponent was in goalkeeping hell, Moss was superb against a Sky Blues team that enjoyed plenty of possession and created numerous chances at McDonald Jones Stadium.

While Andrew Redmayne fumbled and bumbled through his night, the Jets’ keeper was assured and commanding in his area and frustrated the visitors on what was a forgettable night for Sydney.

2. Ivan Franjic (Perth Glory)
I wrote early in the year that the best signing the Glory had made was Franjic.

After multiple years of awful defensive efforts and a need for Tony Popovic to deal with the problem firmly and immediately, Franjic was called in to provide an experienced hand in the waning defence.

As attacking and dangerous as the 31-year-old can be, the cool head and professional poise he has brought to the Glory can never be underestimated.

While the Phoenix failed to consistently threaten the Glory goal on Sunday, Franjic’s mature and astute play was once again vital to the overall success of Perth.

3. Nikolai Topor-Stanley (Newcastle Jets)
Up against a consistent and potent attacking unit, the Jets held out Sydney FC for the entire contest with Topor-Stanley crucial to their defensive effort.

With Milos Ninkovic and Adam le Fondre doing all they could to pull the Sky Blues back from a two goal deficit in the second half, the 34-year-old veteran organised his troops and kept them intently focused on repelling multiple attacking waves.

If only the Jets had produced similarly impressive defensive efforts earlier in the season.

4. Nigel Boogaard (Newcastle Jets)
The second of the Newcastle bookends was in fine form against Sydney FC and played a key role in keeping the visitors scoreless.

There is a little bit of the ‘fine wine’ about Boogaard’s play this season. At 32 years of age there can’t be too many years left.

Yet the play he has produced has been some of his best work and while Newcastle have gone through a poor season, Boogaard’s form isn’t to blame.

5. John Koutroumbis (Newcastle Jets)
With Adam le Fondre fossicking about on the edge of the box, running angles and providing pockets of space for others to enter, Koutroumbis had his hands full for much of the night.

There were a few hairy moments yet the 21-year-old Adelaide-born defender never wavered in his diligent approach, even as Sydney mounted dangerous attacks throughout the second half.

6. Diego Castro (Perth Glory)
Okay, so Castro is a little out of position in the six but there was no way the veteran could miss a spot in the team this week.

On a night when the Glory put the proverbial cleaners through a Wellington team that were, frankly, a little on the nose, Castro was instrumental.

At one point it actually became a little comical; watching Phoenix defenders completely bamboozled by the Spaniard’s skill.

There might be something special ahead if Castro and Ninkovic do come face to face in the finals; two finer footballers I’m not sure we have ever seen in the A-League.

7. Matt McKay (Brisbane Roar)
He is in my team of the week and if you don’t like it, tough. Sure his shorts were typically pulled up just that little bit too high, yet one of the legends of the A-League was sent off with passion and appreciation at Suncorp Stadium on Anzac Day.

The Brisbane fans gave McKay a fitting round of applause during the game and a standing ovation when he left the pitch in injury time. Retirement aside, the veteran actually played a pretty solid game.

When McKay surged into the box with the goal at his mercy in the first half, the fairy tale finish looked likely. It wasn’t to be, despite the Dylan Wenzel-Halls tap-in that followed. It was another defensive catastrophe for the Roar, yet, as always, McKay left the pitch with his head held high.

8. Milos Ninkovic (Sydney FC)
On a night where the Sky Blues left Newcastle wondering how they failed to find the net, Ninkovic could not be blamed for lack of effort.

The Serbian’s football has continued to improve throughout the season and he enters the finals as one of the form players in the competition.

It was another masterclass on the left side of midfield from Ninkovic and but for a brilliant save from Glen Moss and the stoic defence of the Newcastle back four, his effort would have produced the goal/s it deserved. 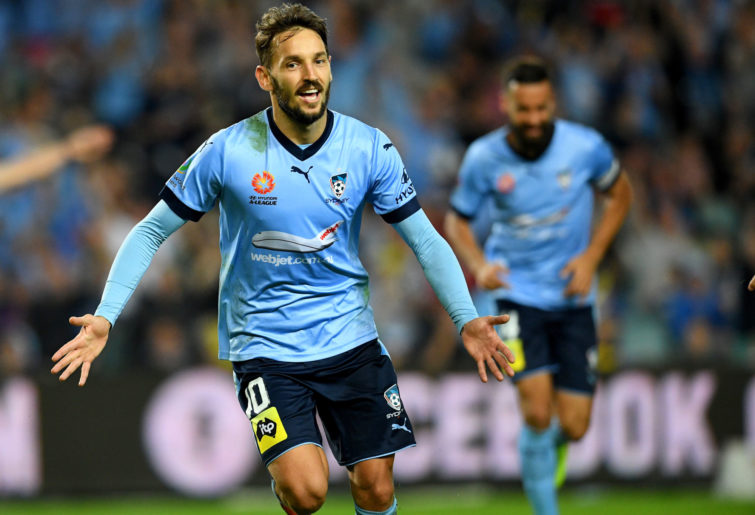 9. Joseph Champness (Newcastle Jets)
It has been a golden fortnight for Champness, as he looks to make up for time lost this season. He is certainly doing it in style and in a hurry, with another influential performance against the Sky Blues on Saturday night.

Along with Dimi Petratos, the young attacker provided headache after headache for a Sydney defence that struggled to cope with his speed and ability to get in behind the back four.

10. Shayon Harrison (Melbourne City)
Harrison’s selection in the team of the week could perhaps have come solely on the back of his opening goal against the Mariners on Friday night.

It was a stunning display of skill and footwork as he crept into the box, evading four defenders and dribbling the ball into the bottom corner.

The fact that the 21-year-old Englishman managed a second confirmed his position in this team. While Harrison does appear destined to leave the A-League and return to England come season’s end, he may still have a shot or two to fire for City in the finals.

11. Craig Goodwin (Adelaide United)
What a season the 27-year-old has enjoyed on his return to Australia. With nine goals and an A-League leading nine assists, Goodwin has provided much of the attacking impetus in Adelaide.

With few others up front providing consistent spark, Goodwin has shouldered much of the responsibility in terms of creating avenues to goal.

Knocking five past the Roar might not be as tough a test as cracking the defences of the best teams in the A-League but Adelaide’s Goodwin-led win on the road will provide some added confidence leading into the finals.