Paul Green must take responsibility for his woeful Cowboys

I find it bizarre that Paul Green’s name isn’t mentioned when the discussion turns to NRL coaches most under pressure.

It’s been almost 600 days since the Cowboys’ 2017 grand final appearance and since then, I’m witnessing a great club and great players in free fall.

North Queensland went into the 2018 season as premiership favourites in the eyes of many, but after a lacklustre start, the hidden cracks were exposed and 12 months on, it appears Green forgot to stop by Bunnings during the off-season to pick up a tube of sealant.

In the sixth year of his tenure, several premiership players have retired or been moved on, with Green’s inability to effectively evolve the side evident.

Some have suggested this is a rebuilding year after the retirement of Johnathan Thurston but the club has been planning for life after JT for a couple of years now and the squad is stacked with representative and premiership players.

Every man, woman and goldfish have had their say on what’s gone wrong with Green’s men and the criticisms have a common theme – poor roster management and his once successful structures have become stale and predictable.

I have serious questions as to whether the young players coming through are being developed properly.

The decision not to include two of the NRL’s most talented young prospects in Jake Clifford and Gideon Gela-Mosby for Round 1 was perplexing. Both were impressive when they were finally given a chance at play NRL at the backend of last season and both impressed during trials.

Clifford is a future representative half and Gela-Mosby should be the Cowboys’ version of Josh Addo-Carr. The likes Mitch Dunn, Corey Jensen, Francis Molo, Shane Wright and Enari Tuala should all be destined for successful careers.

My next question is why certain players’ careers have gone backwards.

Coen Hess burst onto the scene in 2017 with his raw strength, aggression and skill, which earned him an Origin berth.

Since then, he’s been lacklustre. 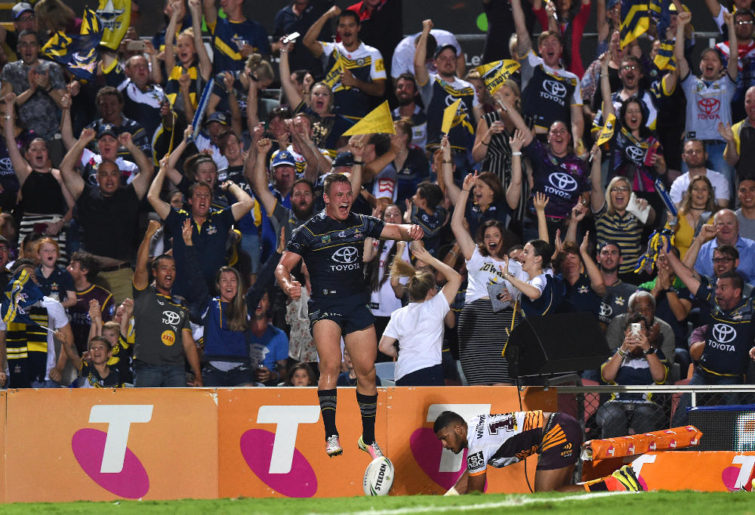 Ben Hampton was recruited from the Melbourne Storm in 2017, has the speed and the skillset to play anywhere in the backline but has seemingly been misused, mismanaged and hasn’t reached his potential.

Hooker Jake Granville and centre Justin O’Neill are still only 30 and 28 respectively, and they are a shadow of the players they were in 2015.

Some older players can age like a fine wine, but for Matt Scott and Gavin Cooper, both 33, perhaps their best days are behind them.

To make a comparison for argument’s sake, Melbourne coach Craig Bellamy has not only developed many young players into superstars of the game, but has the ability to recruit average players and have them consistently perform above their potential.

The Storm boss has managed a high turnover of players to ensure his team are a premiership force year after year. Their system is the envy of not only the rest of the NRL, but other sporting codes as well.

Green should be striving to replicate what Bellamy is able to achieve.

In fairness to the Cowboys, on the eve of Round 1, they were forced to release star recruit Ben Barba and suffered injury setbacks to key players.

Injuries will always cause a reshuffle, but the way Green has reshuffled his backline has raised eyebrows as well.

He’s currently using five-eighth Te Maire Martin as a makeshift fullback, which hasn’t worked. Meanwhile, Hampton and Jordan Kahu – who have fullback experience and have performed well in the position before – are being used in the outside backs.

Persisting with out-of-form players was a costly error of judgement in 2018 and although Green has been willing to drop the fringe players who haven’t performed this season, a few of the mainstays including Hess, Granville and Martin can consider themselves fortunate to continue holding on to their positions.

What I’ve observed in the opening seven rounds is a team struggling with the fundamentals and playing too conservatively.

They’re too structured, too slow, too flat, not enough second-phase play, not enough eyes-up ad-lib footy, and lacking creativity which has resulted in posting 20 points or more only once.

Maybe Green should watch a few old videos of ex-Cowboys trio Johnathan Thurston, Aaron Payne and Matt Bowen carving up opposition defences in 2005 with pure skill, speed and freedom to play what they see.

He has the players capable but they’re a team lacking energy, enthusiasm and confidence to back themselves and take some risks in attack.

Green needs to take the shackles off his players and allow them to play with a little more freedom. Allow Michael Morgan to play both sides of the ruck in the way Thurston played and combine with his five-eighth and fullback.

Whatever the solutions may be, Green needs to figure it out pretty quickly as the finals are still within reach, but they’d need to win 12 from their remaining 17 games to give themselves a chance.

Green is contracted until the end of 2021, but if he fails to make the finals for a second straight season with the quality roster he has, surely he’s under pressure to keep his job.