The AFL landscape after Round 6

Media stories fly from every angle, teams go from flag favourites to dead in the water from week to week, and everyone has an opinion on their team, the entire competition and the state of the game.

Umpires are getting whacked after most games from most directions, and outside of Anzac Day when they were terrible, they very rarely impact a contest.

Sure, they frustrate with their interpretations, but the AFL throws them under the bus by changing rules for the sake of it.

A glance at this season’s ladder makes for intriguing viewing.

There might only be six weeks gone but Geelong have one foot in the top two, by virtue of one of the few legitimate home-ground advantages in the competition and a very soft schedule.

They play four of the bottom six following a tough encounter with Essendon this weekend, and already have a break on the competition at the top of the table.

At the other end of the table, Sydney find themselves in an unfamiliar situation and will be fighting with Gold Coast, Carlton, North Melbourne and a few others in the bottom four.

How the Swans handle this situation will be intriguing, as John Longmire has inherited success and has never had to build from the bottom up.

Carlton fans would be stoked that they have a group of young players as the core of their line-up because they have experienced unparalleled anguish early in a season where they could easy be 3-3 and in the finals mix.

Collingwood and the Giants look very solid bets to push for the top four. In fact, for either to drop outside of that upper echelon would be remarkable.

Filling the remainder of the finals spots becomes a lottery but some teams look better placed than others.

Richmond continue to find a way to win in the most unattractive way possible and have somehow managed to overcome the loss of all-time great third man up Alex Rance to remain competitive. 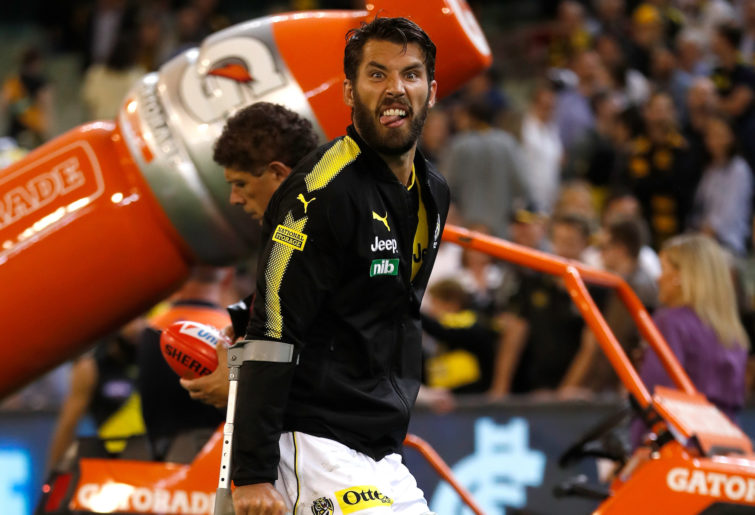 Richmond’s Alex Rance was in good spirits despite suffering a serious knee injury in Round 1. (Photo by Michael Willson/AFL Photos/Getty Images)

Port Adelaide have turned a bright start into something that looks sustainable.

Adelaide have found their attacking mojo in the last fortnight and remain as strong as any list in the league.

One of Fremantle, Brisbane and St.Kilda will be the absolute shock finalist of 2019.

Statistics tell us what we want them to, depending on the argument.

For example, the West Coast Eagles are the most accurate goal kicking team in the league but that is wasted when you rank 18th in inside-50 entries.

West Coast also rank 18th in tackles and disposals, so not only are they not getting the ball, but they aren’t hunting the opposition, which was a strength last season.

In 2019, the Eagles have played six of the top seven teams on the ladder and have tackled Geelong and Collingwood away from home.

You can argue that the Eagles are in huge strife based on those stats, or you look at the draw and agree that we will know more after they play the Suns, Saints, Demons, Crows, Bulldogs and Swans in the next six weeks.

At the other end of the statistical spectrum, the Western Bulldogs rank second in effective disposals and inside-50s but third last in scoring after only two wins.

Those numbers tell you they must get better at converting their opportunities, and their ladder position reflects that.

Port Adelaide have shocked some with their strong start, but the signs suggest they can sustain this start.

They lead the league in possessions, inside-50s and clearances, rank second in marks inside 50 and one-percenters, and concede the least inside-50s in the competition.

This weekend’s game against Collingwood is shaping as a beauty, and one that will tell us plenty about Port’s finals aspirations.

The rule changes haven’t been a major story, mainly thanks to the umpiring and the closeness of the competition.

The 6-6-6 formation rule has had limited impact other than the fact that teams get warned – or get a warning before being warned – when they flood the backline or make a mistake.

With a coaching box full of bodies, these blokes don’t make mistakes like that.

Every violation should be a free kick, no questions asked.

The quality of AFL journalism is becoming more and more of a story.

Last week, Tom Browne claimed to have sources reporting information on Jack Riewoldt’s knee before being pulled up as having guessed or potentially fabricated the news by Riewoldt himself.

Tom it couldn’t have been true. You posted your so called information from a source at midday today and I didn’t have a scan until 3.30pm. You’ve either got the ability to time travel or you guessed….

Some sections of the media are as inaccurate as the goal-kicking is in the AFL.

The fact that the Eagles are the only side converting more than 50 per cent of their scoring shots is an absolute indictment on a multi-million-dollar industry. The players must be better.

Some will argue they are more fatigued than ever given the speed of the game, but that’s a moot argument.

The goals themselves are the same as they have always been, and if it is a mental issue then it needs to be addressed.

Finally, back to the media.

We don’t ask for much as fans. We love the game and trust that the people commentating on it will tell us something we don’t know because they were good players or have been in the industry for years.

Is it too much to ask that the people paid to comment on the games drop the hyperbole – and the desire to be the most outrageous – and instead just dissect the game, the match-ups, and the reasons why games are won or lost?

Don’t continually use the phrase ‘superstar’ for a guy barely in his 20s, or ‘one of the best ever’ or ‘as good as it gets’ when a standard skill is executed.

But over-the-top commentators have a field day with such an even competition, where most teams are a ‘real chance for the flag’, if only for a week.