The five NRL coaches under the pump

This Thursday night brings the most anticipated game of the season to date, as Wayne Bennett’s Rabbitohs square up to the Brisbane Broncos, led by the tactician who walked out on the men from Redfern after one season at the helm, Anthony Seibold.

Granted, the match-ups between the two sets of players on the field is a tantalising prospect, but the narrative and intrigue surrounding this contest is built solely around the two men sitting up in the coach’s box after their highly publicised club swap at the end of 2018.

It serves as a timely reminder of the immense pressure and scrutiny NRL head coaches face on a weekly basis, as the opening passage of the season nears its conclusion.

Fans and club officials alike have now been given a reasonable indication of how successful their mentors have been in delivering success and improvement to their teams.

So in the ruthless whirlwind that is the NRL coaching circus, which five coaches are most in the firing line after almost two months of football?

Anthony Seibold – Brisbane Broncos
On the topic of Thursday night’s blockbuster, there is no question that the heat is on the former Rabbitohs boss after his highly scrutinised move to Red Hill over the off-season.

Acloud of expectation followed Seibold to Brisbane when he snared the coveted Broncos coaching gig on a lucrative long-term deal after taking out the 2018 Dally M Coach of the Year award, and with a talented playing roster at his disposal.

Filling the shoes of a club icon and the club’s only premiership-winning coach in Wayne Bennett put the new Broncos maestro in difficult waters from the very beginning of his tenure.

After an underwhelming start to the 2019 season, with a mere two wins from their opening seven matches, Seibold has been bombarded with a chorus of criticism from fans and as well as a host of former club greats.

Questions have been raised over Seibold’s heavily structured game plan, the performance of his halves and the decision to move on experienced club stalwarts such as Josh McGuire and Jordan Kahu, as speculation begins to mount that other representative stars are also looking to leave.

Another loss against his former club on Thursday night leaves Seibold and the Broncos in severe danger of missing the finals for only the third time in powerhouse club’s history.

The ability of the boss to turn his club’s season around will put his stellar reputation to the test in only his second season in an NRL top job.

Verdict: safe
The Broncos have publicly expressed their belief in Anthony Seibold as the long-term leader of their talented young squad, so much so that CEO Paul White has stated that Seibold will deliver the club an elusive premiership during his tenure at Red Hill.

Signed on a multi-million dollar five-year deal, Brisbane will give their prized recruit every chance to implement his game plan and deliver success to the club.

Brad Arthur – Parramatta Eels
After a disastrous 2018 campaign that saw the blue-and-gold army claim the dreaded wooden spoon, Brad Arthur was always going to be coaching for his Eels career in 2019.

Off-contract at the end of the season, pressure was on Arthur to showcase immediate signs of improvement in his side, particularly after a roster shake-up that saw the departure of an under-performing Corey Norman and the arrival of prized recruits Blake Ferguson and Junior Paulo.

Despite Parramatta showing glimpses of brilliance in the opening seven rounds – particularly their Easter Monday trouncing of the Wests Tigers – he is still yet to convince the club’s hierarchy that he is the right man to lead the Eels in the longer term and secure a new deal.

It is widely speculated that club will wait until the halfway point in the season before making a call on Brad Arthur’s future, meaning he is still very much in the hot seat out west.

Verdict: safe
Despite an abysmal 2018 season, Brad Arthur’s work over the off-season has already begun to pay dividends.

The vast improvement in the Eels’ attitude and intensity is already evident after the opening rounds and they have displayed signs that they are capable of returning to September football.

Another factor in Brad Arthur’s favour is his strong relationship with the playing group, particularly co-captain Clint Gutherson. The fan favourite is yet to re-sign with the club and this may have a lot to do with Arthur’s future at the club remaining unresolved.

Nathan Brown – Newcastle Knights
There was a weight of expectation thrust upon the shoulders of Nathan Brown’s Knights heading into the 2019 campaign.

After several seasons of misery in the Hunter as fans endured the lean years of Brown’s roster rebuild, Newcastle were finally considered a top-eight team after the recruitment of several stars, most notably David Klemmer, joining the likes of skipper Mitchell Pearce and whiz kid Kalyn Ponga.

However, the Novocastrians have made an underwhelming start to the season, snaring only two wins from their opening seven games.

Nathan Brown has come under fire for failing to improve his star-studded team and questions were raised over his controversial decision to move Kalyn Ponga to five-eighth after setting the NRL alight from fullback in 2018. The experiment was ultimately ditched after just three games. 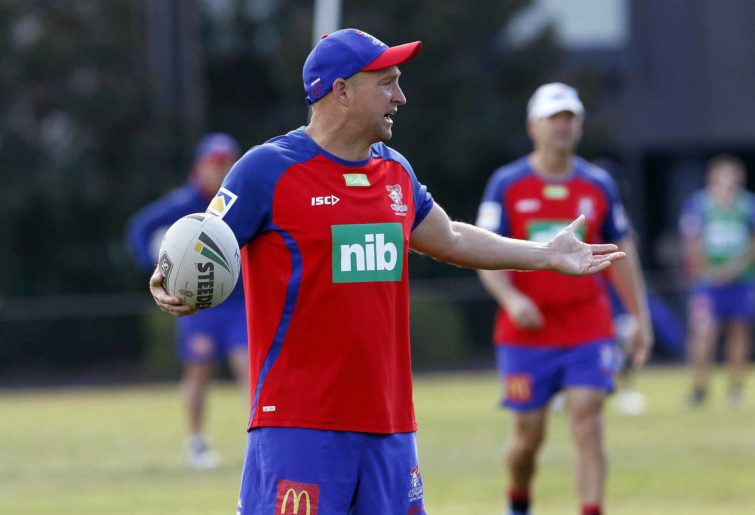 Verdict: danger zone
Given the enviable quality of his roster, fans and club officials alike may very well run out of patience with Nathan Brown if he fails to elevate the Knights into the top eight for the first time in his four-season tenure.

Brown is currently signed to a performance-based contract at the Knights, which may allow the club to freely part ways with former Dragons mentor if results are not forthcoming.

Paul Green – North Queensland Cowboys
Despite the retirement of Johnathan Thurston and sudden departure of star recruit Ben Barba, the Cowboys looked primed to make a return to finals football in 2019.

Boasting one of the most intimidating forward packs in the NRL and a representative halfback in Michael Morgan, the pieces of the top-eight puzzle seemed to be falling into place for Paul Green.

However the Cowboys have proven to be one of the most disappointing teams in the opening stages of the season.

Their lacklustre attack and lack of aggression in defence gives the appearance of a tired team, and speculation has begun to surface that Paul Green has grown stale in Townsville. 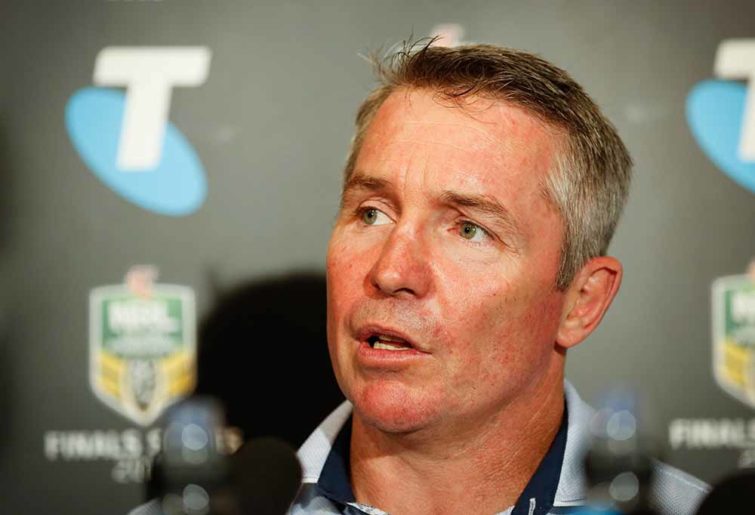 Verdict: danger zone
Another disappointing campaign following a bottom-four finish in 2018 with the quality of players at his disposal could spell the end of Paul Green’s tenure at North Queensland.

Rumours are surfacing the Green is beginning to lose the support of his players, adding further fuel to the speculation that the premiership-winning coach could be on his way out the door sooner rather than later.

Dean Pay – Canterbury Bulldogs
After a horrid start to the season featuring two 40-point drubbings at the hands of the Warriors and Dragons, the Bulldogs sit well and truly in the wooden-spoon firing line.

Naturally, after an unsuccessful first season at the helm in 2018, pressure is mounting on coach Dean Pay.

Inconsistency and an uninspiring attack have plagued the opening rounds of the season for an inexperienced Bulldogs side, raising doubt as to whether Pay is the right man to lead the embattled club going forward. 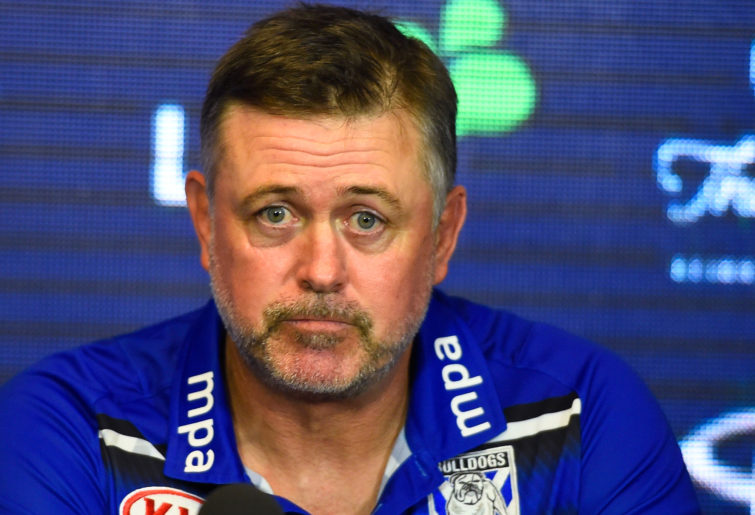 Verdict: safe… for now
The Bulldogs’ dire salary cap situation led to the departures of several experienced players, such as David Klemmer, the Morris twins and Moses Mbye, leaving Dean Pay with one of the most inexperienced rosters in the NRL.

As a result, the Bulldogs are likely to stick by Pay and allow him time to bring together his desired squad before making any hasty decisions on his future.

He was granted a one-year contract extension, ensuring his short-term future at the club. However, if the losses continue to pile up, Pay could soon find himself on the outer at Belmore.