Carlton have started to emerge

This headline probably doesn’t comfort the faithful at Princes Park, but the Blues’ start to the season has been super impressive.

Wins and losses are how football clubs should be assessed, but you also need to see the bigger picture sometimes.

Since Brendon Bolton became coach in 2016, Carlton have amassed seven, six, two and one wins in his four seasons at the helm.

Taking over one of the older lists in the competition at the time, Bolton was tasked with rebuilding the playing roster.

The Blues’ list at the end of 2015 was a complete rabble.

Mick Malthouse mounted a tilt at the premiership, but when that didn’t happen, the squad looked tired.

Stars like Chris Judd, Eddie Betts and Jarrad Waite had either retired or been traded. So while they slipped down the ladder at the end of 2015, they were still relatively experienced.

As Carlton have tumbled down the ladder under Bolton, their list profile has changed. They have let go of experienced players and incorporated young bodies into the team.

The side had to go through growing pains while this happened and now the flowers are starting to bloom.

They have recruited probably the most consistent 18-year-old midfielder in history in Sam Walsh, but he’s not the only star.

Young on-ballers Paddy Dow, Sam Petrevski-Seton and Zac Fisher have emerged as genuine talents and the form of Harry McKay as a contested-marking beast and Jacob Weitering in defence has given fans hope. 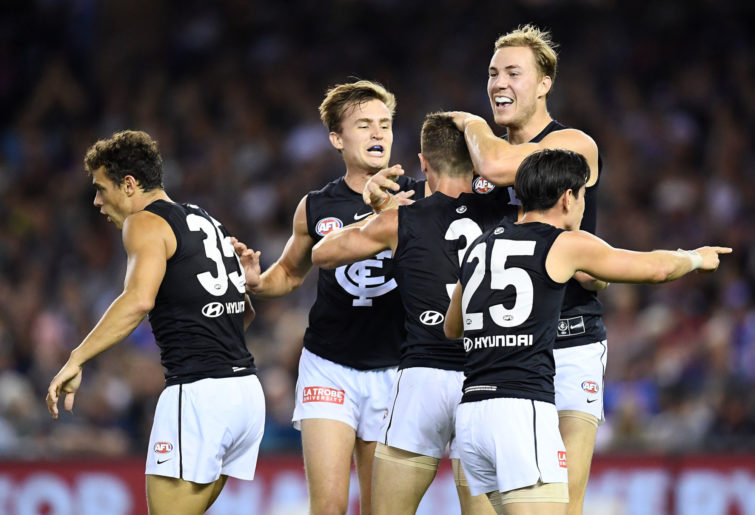 And a side can’t be competitive without the senior players holding their form.

The return of a fit Marc Murphy has given Patrick Cripps a stable support system to do his work.

The form of Liam Jones has allowed Weitering to do what he does best.

There is a lot to like about what Carlton are doing this season. They are becoming a dependable, solid team.

They have been in every game despite a difficult draw. They have played Richmond, Port Adelaide, Sydney, Gold Coast, Western Bulldogs and Hawthorn.

Three of those six sides played finals last year with Port Adelaide holding a spot in the eight for much of last year.

They could easily be either 3-3 or 4-2 with the losses to Gold Coast and Hawthorn being last-second affairs.

Against the Swans, they controlled the first quarter and only inaccuracy stopped them from taking a lead.

This week against North Melbourne they have an amazing opportunity to win their second game for the year.

They are playing a North side fighting for respectability. Carlton have made inroads this year but they need to win for their fans – to give them hope that this rebuild is sustainable and lasting.

Bolton is the man to lead them out of the doldrums. Can the players help him achieve his vision of success?

I’m quietly confident that they can win. They have a simple game style that requires effort and a willingness to play one-on-one.

If they stick true to those values, there’s nothing but positive news for this week and beyond.