First there was South Africa’s failure to secure the hosting rights to the 2023 World Cup, surprisingly losing out to France, then Namibia withdrew from South African provincial competition owing to financial constraints.

Next bombshell came when Rugby Africa cancelled first and second division competition entirely this year, owing to disagreements with sponsors.

Now the continent’s rising star Ghana has been forced to postpone its eagerly-awaited fixture with Nigeria for the second time, owing to “logistical” issues.

Not so long ago, African rugby was thriving with highly competitive national championships and World Cup qualifying.

The top half dozen teams were all at about the same level. Namibia very nearly missed the 2015 World Cup, in fact, and had to rely on an unlikely win for Zimbabwe over frontrunners Kenya to make it.

The North African pair of Morocco and Tunisia, with their mostly France-based squads, have both reached the World Cup qualifying repechage stages in the past. Morocco has also won three African championships, while Tunisia has been runner-up on three occasions.

But in recent years a distinct hierarchy has developed. Namibia has clearly become the number two team on the continent behind South Africa, barely breaking a sweat in qualifying for their sixth successive World Cup in 2019, beating closest rival Kenya 53-28 in the decisive match.

They have also won the last five African championships in a row, having won just three times the previous decade. Almost certainly its increasing dominance owes to the Welwitschias’ involvement in South African provincial rugby.

Kenya has emerged as the number three team on the continent, often posting huge scores in African competition, including a couple of centuries against Tunisia in recent years. They continue to dominate their local rivalry with Uganda and have turned the tables on Zimbabwe since that shock defeat in 2014.

The success of the national 7s team has undoubtedly raised the profile of rugby in general, which appears to be reflected by their vast player numbers.

But all this needs to be kept in perspective. Kenya may be trouncing its African rivals, Namibia notwithstanding, but Kenya has also suffered recent home defeats to Hong Kong and Germany – two teams it had beaten comfortably in the past (along with the likes of Spain and Portugal).

That indicates a step backward on the international scene, and the Simbas also finished bottom in the World Cup qualifying repechage tournament against the same two teams plus Canada last Autumn. 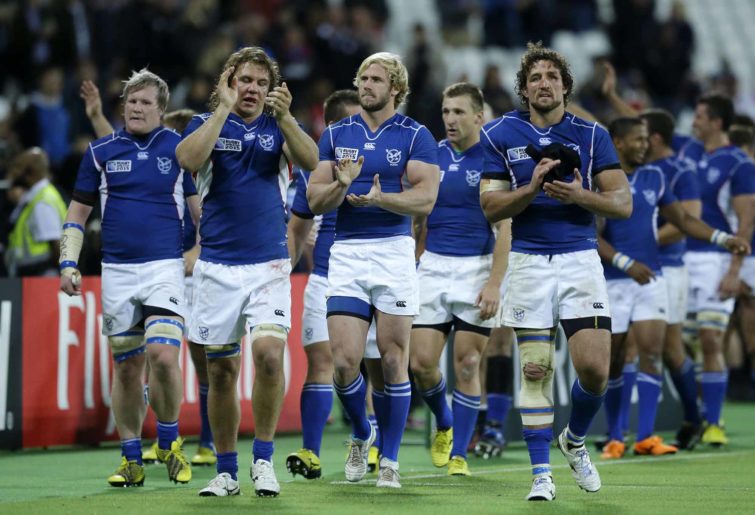 Zimbabwe has obviously gone backward as well, and though probably the continent’s number four team, a return to the World Cup for the first time since 1991 does not appear likely in the foreseeable future.

Even when they made the repechage stage of the qualifying tournament five years ago, they were easily beaten by Russia, who in turn were defeated by Uruguay. The North African pair look unlikely to make the repechage again, and have fallen a long way off the pace since transferring from European competition to Africa at the turn of the century.

1995 World Cup qualifiers Ivory Coast are playing second division in African competition these days, as are Madagascar – a nation with huge enthusiasm for the sport and packed stadiums for national fixtures.

Madagascar, which once beat Namibia 57-54 in front of 35,000 fans and lists rugby as its national sport, has 164 clubs in the capital city alone!

But only rarely has that translated into success at international level, and they were well out of their depth in the final round of the African qualifiers for the 2015 World Cup, despite hosting the tournament.

Who does that leave? Uganda have certainly had their moments, winning an African title, upstaging Kenya on occasions in the Elgon Cup (though not for a while) and thumping Tunisia in their last two meetings.

But they also face the same limitations as Kenya – lacking both funding and access to regular competition at a higher level. Neither do their players seem to be attracting much attention from professional clubs; two metre speedster Michael Wokorach’s phenomenal performances in African competition last year slipping beneath the radar, for example.

So what can be done to help these nations improve and also help bring through new teams where substantial interest is being shown in the game? It seems to me the answer lies primarily in increased involvement with the traditional rugby powerhouse at the base of the continent. Namibia’s success is clear evidence of this.

The exception would be the North African sides, and possibly their Francophile counterparts in the West of the continent (Senegal, Ivory Coast, et al), who might be better off seeking increased involvement with France, where many of their top players are based.

While it is surely not going to be possible to include all these teams in the national club and provincial competitions of France and South Africa, if talented players such as Wokorach could be identified at an early age, given access to world-class training programmes and ultimately signed by professional clubs, we might see African rugby emerge from the shadows in the future the same way football did on the continent a few decades ago.