Rugby Australia has tonight finally concluded its lengthy code of conduct hearing over Israel Folau, finding the Waratahs and Wallabies fullback guilty of breaching the players’ code of conduct.

The three-person panel charged with overseeing the hearing found Folau committed a “high-level breach” of the code with a controversial social media post in April.

The full Folau saga is yet to reach its conclusion, however, with the panel awaiting further submissions by both the RA camp and Folau camp on an appropriate penalty.

Given what both parties have been through, however, it is hard to envision a scenario where Folau stays under contract with rugby.

Additionally, News Corp’s Jamie Pandaram said in a tweet that a high-level breach is the only level of breach that can be punished with termination of contract.

Breaking: panel has decided Folau committed a high level breach, but no sanction has yet been given. High level is only level that allows termination of contract

The full statement by RA reads as follows;

The Code of Conduct hearing in the matter of Israel Folau has concluded in Sydney today.

A panel of John West QC (Chair), Kate Eastman SC, and John Boultee AM presided over the three-day hearing which commenced on May 4.

The panel has today provided a judgement that Israel Folau committed a high-level breach of the Professional Players’ Code of Conduct with his social media posts on April 10, 2019.

The panel will now take further written submissions from the parties to consider the matter of sanction.

A further update will be provided after the panel delivers its decision on sanction.

Neither Folau nor a representative of RA have commented on the verdict yet. Despite Folau’s earlier claims that he’d walk away from rugby in the event the conduct demands clashed with his faith, the prospect of an appeal in the event of a guilty verdict has long been touted. After a promising four-year stint in the NRL, Israel Folau came across to rugby following his one-year experiment with the AFL’s GWS Giants and made an almost immediately positive impact on the field.

In a six-year career with the Waratahs, the 30-year-old scored 60 tries in 96 matches and was pivotal in the club’s 2014 Super Rugby triumph. He replicated his strong form on the international stage, crossing the line 32 times in 62 Tests – making him Australia’s fourth-highest try-scorer of all time – while being awarded the John Eales medal on three occasions.

But the relationship didn’t stay rosy forever. In September of 2017, in the midst of campaigning around the plebiscite on same sex marriage, Folau attracted some controversy for publicly opposing same sex marriage one day after the Wallabies officially announced their support for change.

I love and respect all people for who they are and their opinions. but personally, I will not support gay marriage.✌❤????

While Folau was not sanctioned for that remark, he attracted further controversy when, in April of last year, he claimed God’s plan for homosexuals was “HELL… Unless they repent their sins and turn to God,” when quizzed by another Instagram user on his views.

Despite condemnation from several groups – including Wallabies sponsor Qantas – Rugby Australia again elected not to sanction Folau for his comments. Folau defended himself at the time, claiming allegations of homophobia and bigotry “could not be further from the truth”, while also saying he was happy to walk away from the game if his faith would conflict with the commercial demands of professional rugby.

But on April 10 of this year, Folau found himself in the spotlight again, posting a controversial image on Instagram that listed homosexuals alongside drunks, liars and thieves, claiming hell awaited them unless they repented. 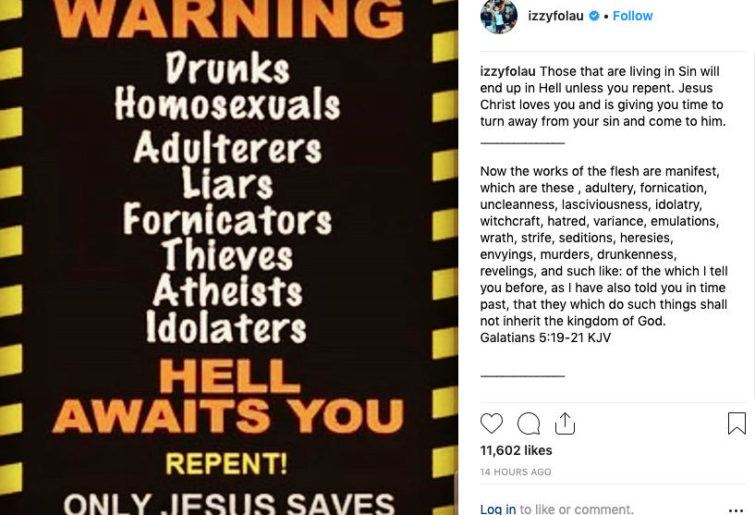 This controversy proved to be the final straw for Rugby Australia, who moved immediately to terminate Folau’s contract.