Ben McKay
8th May, 2019
3
Join the conversation
Advertisement
Write for The Roar

Melbourne City have parted ways with coach Warren Joyce and will continue their long battle to realise their A-League ambitions without the Englishman, after declining to extend his two-year stint as senior coach.

Joyce leaves City after a tumultuous season; one of on-field underachievement given the club’s alignment with Premier League giants Manchester City and the deep pockets of their Abu Dhabi-based owners.

City’s fifth-placed finish came after a brighter third-placed result in his first season. 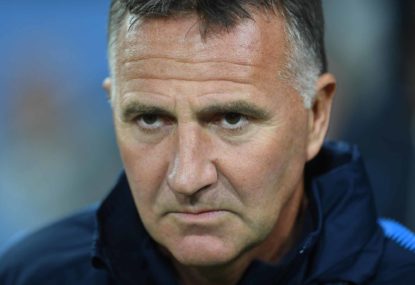 City went down fighting, but Joyce had to go

After the match, Joyce denied his second season was a regression but City bosses disagreed, and will now start the search for his successor.

“It’s been a challenging couple of seasons, but I have great pride in the players and staff for the progress the club has made,” Joyce said in a statement.

“I’ve seen real growth from the playing group and within the football organisation and the continued development of the right kind of culture.

“I am confident that A-League success is around the corner.”

Joyce’s chief remit was always results – with a goal of reaching the Asian Champions League – but he was also tasked with cultural change in the dressing room.

The 54-year-old installed a hard-working, team-first ethos at the club, at significant cost.

Socceroos legend Tim Cahill and club great Bruno Fornaroli walked out on the club during his two years in charge.

City’s player turnover was significant; Luke Brattan was the only player in Sunday’s elimination final loss to have played under a different coach at the club.

Fans voted with their feet.

Crowds were down amid the player losses and a less exciting style of play, with the club’s active supporter group disbanding.

“We want to be constantly competing for silverware and playing in the Asian Champions League, with a definitive brand of football,” he said.

“Under his stewardship a significant number of young players have made the transition to first team football and many have been recognised with national team selection,” he said.