Most fans remember the brave efforts in 1975 and 1996, when we made the final but lost to a better team on the day.

Our collective memory tends not to be as sharp when it comes to remembering Australia’s World Cup disasters.

I thought I’d whip up a quick primer and see if I can find any parallels to this year’s competition.

1979
This is the least remembered World Cup of them all, lacking legendary games and feats.

Hardly anyone played well, though, outside of Andrew Hilditch, and Australia were thrashed by England and Pakistan and lucky to escape with a win against Canada.

Lessons to be learned? Pick your best players. And a dodgy middle order will cost you.

1983
A classic tournament, and a more famous disaster for Australia.

We fielded a very strong side – Greg Chappell pulled out, as he tended to do at the time when it came to overseas tours, but we still had players like Dennis Lillee, Rod Marsh, Allan Border, Kim Hughes, David Hookes and Geoff Lawson.

Dennis Lillee and Jeff Thomson both represented Australia at the 1983 World Cup. (Photo by PA Images via Getty Images)

The team was plagued by infighting, however. Marsh and Lillee wanted Marsh to be captain rather than Hughes and weren’t terribly quiet about it.

Also, South African officials met up with players during the tournament to entice them on rebel tours.

Australia got off to a terrible start losing to newbie Zimbabwe, led by Duncan Fletcher.

They were thrashed by the West Indies, but then bounced back and beat India thanks to a century from Trevor Chappell and a six-for from Ken MacLeay.

Australia beat Zimbabwe in the rematch, then lost to the West Indies again and were spanked by India, who went on to win the tournament.

Lessons to be learned? Don’t take minnow teams for granted. Don’t fight amongst yourselves. Don’t make Kim Hughes captain. And a dodgy middle order will cost you.

1992
Following the 1987 World Cup, Australia had the best ODI side in the world, so everyone was pretty cocky about our chances of winning the cup at home in 1992.

The side was stuffed with champions, from Border and Dean Jones to the Waughs and Craig McDermott.

But New Zealand got the drop on us in the first game and Australia could never click, failing to make the semis.

At least the tournament was a cracker, with New Zealand, South Africa, England and Pakistan having great sides. The event was full of games and moments that are still remembered today.

Lessons to be learned? If you don’t click, you’re going to lose. Sometimes other countries can just be really good. And a dodgy middle order will cost you.

But despite several of those players making the 2011 World Cup squad, that team never seemed to have a winning aura about it. 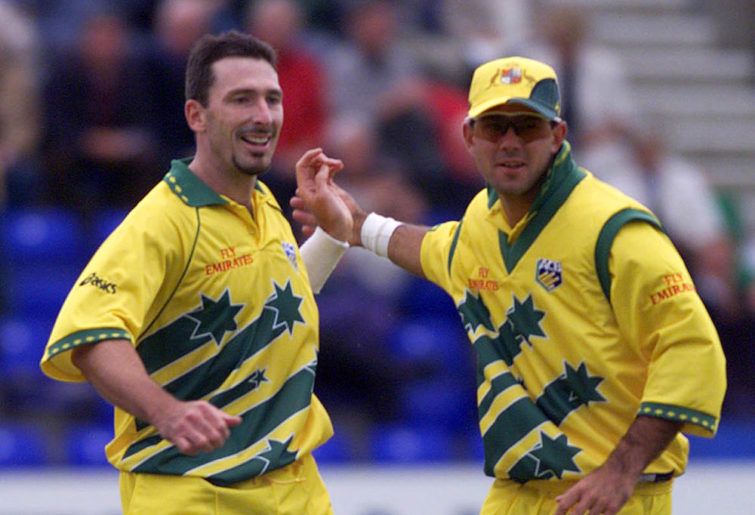 Ricky Ponting and Damien Fleming lifted the 1999 World Cup, but Punter had no such joy in 2011. (AP Photo/Alastair Grant)

We were coming off a thrashing in the 2010-11 Ashes, Ricky Ponting was in decline, the middle order never clicked… and it cost us.

Australia beat Zimbabwe, New Zealand, Kenya and Canada but lost to Pakistan and went down in the quarter-finals to eventual champions India.

You know what sticks out looking at old scorecards? Australia’s bowling has always been pretty good. We’ve never – not even in 1979 – had a poor bowling attack.

Where the World Cup gets won and lost for Australia is in the middle order. Batsmen around five to seven who come in and either do a rescue job or ram home the advantage.

In our disastrous World Cup campaigns, the middle order failed to step up.

So if Maxwell, Stoinis and whoever else is down there click, then we have a chance.

If not, no matter how well our openers and bowlers do, it’s game over.