“The Bishop wants to see you.”

Israel Folau is still loose-limbed, though 37 with a slightly thickened waistline. He is the area youth pastor of a large assembly, with a focus on sport as entry point for the unchurched. Reporting directly to the Bishop, courtesy of his million-dollar contribution in 2020 upon retirement from elite rugby, Pastor Folau is an immensely popular churchman.

His “sermons” are typically rugby parables, weaving simple reminiscings of prodigal flyhalves, former lost amigos, analogies about cross-kicks and the miracles in St Luke, and the corrosive effect of big money on the soul.

But it’s his fame, not his lost fortune, that brings the kids from the neighbourhoods, to hear his repetitive themes.

As he lopes on to the stage, the screen behind him flashes evocative images of his tries, his wedding, the births of his sons, his smiling wife, and then, the headline of his dismissal, with the cross superimposed: “What Would You Give Up for God?”

The budget of his assembly had grown exponentially, as Folau’s star power drew not just kids, but their parents and grandparents, and friends, and old rugby bigwigs, and even an octogenarian radio host with a new zest for the fight for faith. 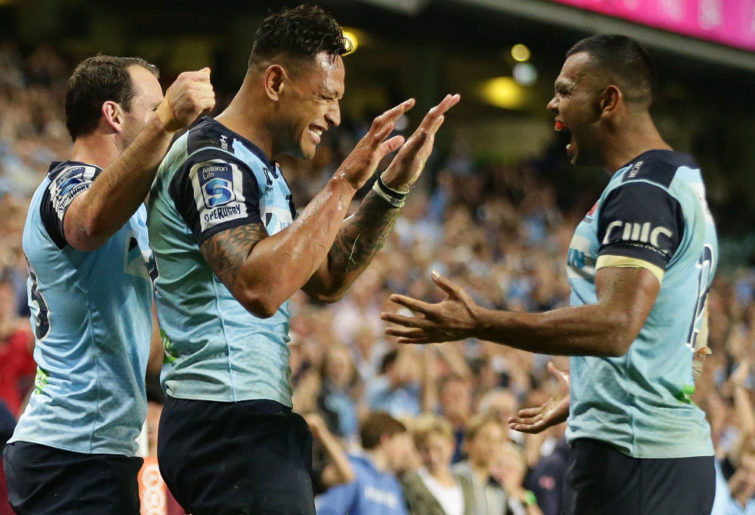 The superstar talent of Israel Folau is not in doubt. (Photo by Mark Metcalfe/Getty Images)

In a transcendent moment, in 2025, even David Pocock humbly accepted the whole Gospel, renouncing all facsimiles of virtue unmoored to ancient text and orthodoxy.

As Pocock limped down the aisle, Folau lifted his long arms heavenward, praising, and they met in a hug that looked like a choke tackle. Tears flowed.

A gleaming new building, a natatorium, a gym, and eleven missionaries in the Pacific Island nations had been funded. Pastor Folau could not be happier. The arc of his life seemed bent to this happy and meaningful trajectory.

A nod from the janitor, and a short hug, and Pastor Folau walked smoothly to his boss’s office.

When he crossed the threshold, a chill crawled up his straight spine.

The office was full. The Bishop, a deacon, the church lawyer, a bald and serious man he’d never seen before, the head of IT, and the church secretary. They looked uncomfortable. Grim. Sad.

Pastor Folau thought something had happened to one of his “kids.” Over the years, he’d ironically come to adjust his message to gay teenagers, moving from a purely environmental ‘choice’ view of them to a mixture of genetics and free will; he spoke and acted with love as he joined them in their struggle; fatherhood having revealed to him how heritable even temptations and instincts can be. Two of his ‘flock’ had confessed suicidal thoughts to him, recently, over their sexual confusion. His heart sank.

“Are these your posts?”

The man he’d never seen before slid a tablet across the table. Pastor Folau saw his posts of the day before.

“Lord, help me in my unbelief. Remove the thorn from my side. Thy will be done.”

And: “To all my Assembly kids. #Grace! Nothing can separate you from God’s love. There is no unforgivable sin. And all sin is equal in God’s eyes.”

Finally: “I’ve been studying the Flood. I’m just a rugby player, but it’s weird that two platypus and two koala and two roos could get to Mt Ararat and back to Australia in a few years. Hahaha! Come study with the Bishop on this!”

Pastor Folau had been given a code of communication when he assumed his position. On matters of doctrine, he was to keep doubts quiet, confer with the Bishop, and only post messages aligned with the initiatives outlined by the church. He’d fallen afoul twice, but the Bishop had laughed it off, told Folau to tweet less and pray more, and closed with a “go and sin no more.”

Looking at his posts, Folau thought: “Oh, there’s the unbelief thing, but that’s a quote from St Paul, there’s the thorn, that’s Paul again, there’s the no unforgiveness, and the Flood issue. Probably should’ve let that one go.”

“Why would you post doubts about the Flood, Izzy?”

“Oh, no, sir. I was using that to get more kids to come to Sunday service. To get a little buzz. Maria has been reading this book about Gibraltar — it was connecting Morocco to Spain, and Atlantis was a city in the Mediterranean, which was land, and that’s where Noah and his sons lived, and then the land bridge broke, like a dam, and all the water of all the seas rushed in, and the world they knew flooded, probably 25 kilometres a day, and so Noah had all the animals of THAT place in his ark, not elephants or polar bears or kangaroos. I was just getting a little into it, to drive you an audience.”

“That, you should not have done,” the Bishop intoned. “I’m one of the foremost diluvial scholars. My thesis is on the Great Deluge. How every mountain range has sea shells. How every people has a great flood narrative. The literal truth of the Book is all we have. The books within the Book were selected by God, breathed by God, and nothing in it is false.”

The church lawyer nodded. I’m sorry, Mr Folau. You’ve crossed an important line. Several of our largest donors have drawn a line, too. And you can’t say you weren’t warned.”

“But I’m on the team! I’m just doing it a different way. This will make the kids interested. They come to the Locker Room on Friday nights, and Poey brings his band. But they hate the Sunday morning sermons. It seems dry. And Maria was saying ‘If everyone died except Noah and Ham and Shem and Japheth and their wives, and the animals in an ark, how would there be stories in every place about THAT flood’ because they’d all be dead and also how would all the Samoans and Maori come from those eight people and also all the African people and Mayans and the Vikings and there wouldn’t be enough time for that to happen, and in China and also, that would be a bloody big ark.”

The room was quiet.

The small stooped church lawyer handed a document to Folau, who palmed the entire page, saw the title, and looked at the group, with a stricken expression.

“No doubts? I can’t even talk about doubts? Rugby booted me for being too sure about hell and now you’re sacking me for not being sure enough?”

The Bishop raised his hand.

“You were a pastor serving this church according to our codes and we believe in the Bible as the inerrant word of God, true in all respects, and inspired. You can have doubts. We all do, from time to time. But you are leading youth. They need our certainty. In this confusing, fallen world. You are being fired for posting in ways detrimental to this congregation and our stated values, and you were warned.”

Folau sat, silently. He contemplated the way he would tell Maria. He stood, regally. He nodded to all. And walked out, a free man, at last.