After a huge week in which one footballer had the audacity to consume a beer or three on his day off and a modern legend got off at the tribunal because he’s a good bloke – and, you know, the vibe – we now, tragically, have to talk about an actual football game.

The Bombers are just chugging along at the moment. The stink of the first two rounds has been washed away, but it’s hard to tell yet if they’re any good.

There’s no shame in their past two losses – Geelong and Collingwood could well be the two best teams in it – but losses are just that, and at 3-4 they’re precariously placed for a team that expects to play finals at a minimum.

There’s no such difficulty in getting a handle on Sydney. For the first time in living memory, the Swans stink.

Sydney optimists will point to the 0-6 team of 2017 as evidence that the Bloods can turn it around, but this team isn’t of that quality.

The Swans have been quietly rebuilding the core of their list for a few years now, and they’re up to their ears in that rebuild right now. The team that lost to Brisbane was on average about six months younger and 13 games less experienced than the apparently youthful Lions.

Eight of the 22 in last week’s loss had played fewer than 50 games, and that will become nine tonight with four-gamer Colin O’Riordan replacing Harry Cunningham and his 111 games of experience in the only change to their line-up.

The Bombers – playing off just a five-day break – have made four changes to a team that was no match for Geelong.

Orazio Fantasia comes in – much to the delight of Brian Taylor and the despair of viewers across the country – as do David Myers, Brayden Ham and Zac Clarke. Out of the team go Joe Daniher – ‘managed’ after the short week – as well as Kyle Langford, Jordan Ridley and Mark Baguley, who have all been dropped.

Joe Daniher drops out of the Bombers line-up for Friday’s clash with Sydney. (Photo by Michael Willson/AFL Photos)

With Daniher joining Mitch Brown on the sidelines and Cale Hooker now spending his time in the back half, it leaves the Bombers a little short in attack.

Aaron Francis will likely float forward and Jake Stringer isn’t small in the true sense of the word, but there’s no major aerial threat.

Kicking it long into attack could play into Sydney’s hands. The Swans are ranked dead last this season when it comes to conceding inside-50s, giving up on average 61.4 per game – Carlton are next worst at 58 a game.

What they do well, however, is bring the ball to ground or take it away when it comes in.

Despite conceding so many inside-50s, they have conceded the fourth-fewest marks in their defensive 50. Aliir Aliir has a strong say in that. His 23 intercept marks this season are the third most behind Alex Keath and Jeremy McGovern.

However, should the ball come in regularly, it will take an exceptional display from Aliir, Dane Rampe and the unproven and unconvincing Lewis Melican if the Swans are to restrict the Bombers to a low score.

Stringer, Fantasia and Anthony McDonald-Tipungwuti are all extremely comfortable hunting the ball once it hits the deck.

Stringer, in particular, is having an exceptional season – his finest since his All-Australian year of 2015. Rampe is well suited to take on the former Bulldog.

The midfield battle will be an interesting one, and if the home team are to pull off an upset, it’s the one area they could find an edge.

Isaac Heeney is the best on-baller in tonight’s match, though just how much time he spends following the footy is always a bit of a conundrum for coach John Longmire given Heeney’s ability in attack where he is even more valuable with Lance Franklin out of the side.

Josh Kennedy and Luke Parker are both past their best, but they’ll keep on keeping on. 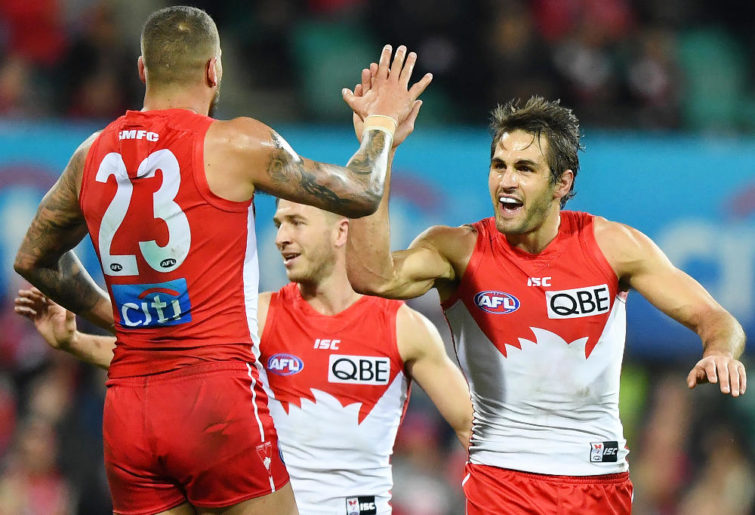 Josh Kennedy is key for the Swans in the absence of Lance Franklin. (AAP Image/David Moir)

Zak Jones is spending more time in the middle and is capable and can provide some much-needed dash, though he won’t put fear into many opponents. Ollie Florent is coming along nicely.

George Hewett, however, could be the key tonight.

Hewett is a tough bugger and a capable tagger. I expect he’ll go to Zach Merrett, who has been known to struggle with heavy attention.

Another option could be to send him to put the clamps on former cross-town rival Dylan Shiel.

Unflinching Essendon skipper Dyson Heppell is having a very solid season and will be more than comfortable banging against Parker or Kennedy all night.

The Bombers should have a slight edge around the footy, but nothing major.

Their defenders, however, will have slept well. Hooker, Michael Hurley, Patrick Ambrose and runners Adam Saad and Conor McKenna should dictate terms and drive the ball towards their attack without too much difficulty against a ho-hum collection of Sydney forwards.

Sydney aren’t your traditional bad team, but they are a bad team nonetheless. If Essendon are to be taken seriously this season, this is the kind of game they should win and win comfortably.