ZSport
Roar Pro
11th May, 2019
5
Join the conversation
Advertisement
Write for The Roar

The Waikato Chiefs have notched an incredible 29-23 win over the Durban Sharks at FMG Stadium in Hamilton.

The Sharks were coming off an astonishing 21-all draw in Christchurch and were looking to finish their three-game overseas tour without a single loss.

The Chiefs also drew to the Highlanders 31 points apiece in Dunedin last round. They were looking to climb up the New Zealand conference from their place at the foot of the ladder.

In greasy conditions, Marty McKenzie put the home side on the board first, executing a successful penalty kick early.

The Sharks looked to hit back and had an attacking scrum in the middle of the field, 20 metres from the line. A huge shove from the Chiefs’ pack managed to force a penalty against the South Africans and escape their grasp.

They managed to evade another Shark attack just two minutes later when Jean-Luc du Preez spilled the ball after ten phases of pressure from the visiting side.

Both teams found it hard to link together long phases as the slippery conditions made ball handling difficult.

Brad Weber then broke the try-scoring deadlock in the 26th minute. Atu Moli broke numerous tackles as he barnstormed his way over halfway.

The ball was handed to McKenzie, who slipped his way through the line and offloaded to Sean Wainui on the inside.

Wainui drew in Aphelele Fassi before passing to Weber, who slid in for the try under the posts. McKenzie converted the try.

A Chiefs clean-out past the ruck caused a scuffle between both sides as emotion spilled over in the 29th minute. The resulting penalty allowed Sharks fly-half Curwin Bosch to score the visitors’ first points of the evening from his own boot.

The men from Durban then scored a try of their own in extraordinary circumstances.

A high box-kick went up on halfway and Solomon Alaimalo went up to contest. It bounced off his shoulder and popped backwards.

The ball landed straight into the hands of Sibusiso Nkosi, who looked as if he would be held up in the tackle. He somehow managed to offload to Hyron Andrews, who was charging on to it.

He had a clear run to the line and was not stopped. Bosch converted the try to push the score to 10-all. 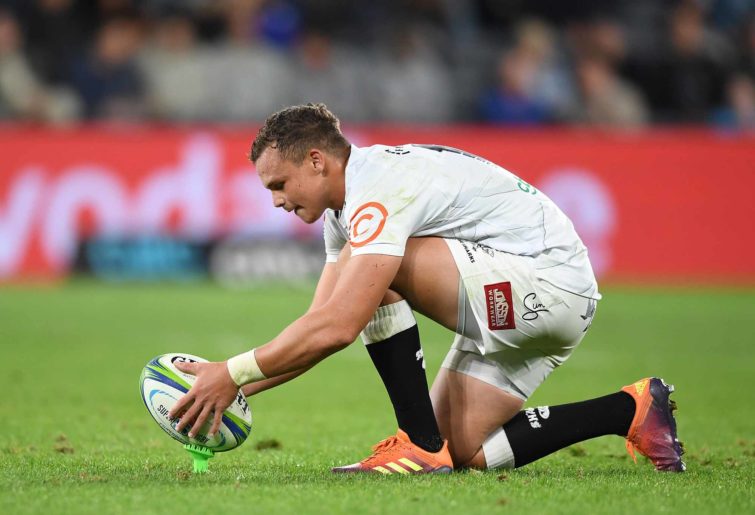 There would still be more in the first half though as the Chiefs found their way over the line once more.

The hosts had a line-out close to the opposition’s line and attempted the rolling maul. The attempt misfired but Anton Lienert-Brown ran a great crash-ball line to edge closer to the chalk.

Mitch Karpik then barged over from close range to score the home side’s second of the night. McKenzie added the extras to hand the lead back to the Chiefs by seven.

Bosch managed to kick another penalty goal in the 39th minute after the Chiefs conceded a penalty. The score at half-time was 17-13 in favour of the New Zealand outfit.

With the margin at four points, the visiting side were within striking distance and looked to take the lead for the first time in the game.

But it was the Chiefs hot on the attack after some poor handling under the high ball from the Sharks’ back line.

A crucial turnover by Makazole Mapimpi halted the pressure and got the Sharks out of jail.

Mapimpi had more impact on the game just three minutes later when his soccer skills had the Chiefs reeling back on their own line.

Chiefs hooker Nathan Harris cynically infringed at the breakdown and was yellow-carded by referee Nic Berry.

The Sharks kicked for the corner and the resulting line-out maul had the Sharks inches from the line.

The 205-centimetre Ruan Botha burrowed his way to the line and reached out to place it on the chalk, putting the Sharks into the lead. Bosch converted the try and the score was 20-17 with just over 20 minutes left.

Bosch then kicked another penalty goal in the 62nd minute to extend the visitors’ lead to six points.

It didn’t stay like that for long, though, as the Chiefs looked to cut the deficit.

Long phase play five metres out from the line eventually payed dividends when Lienert-Brown found a hole in the defence. He dived over but McKenzie could not add the extras from the left of the uprights.

From the kick-off, replacement back Alex Nankivell cut through the disorganised defensive line and burst over halfway.

He found Alaimalo, who straightened up before handing it to Weber. Weber skipped away to the try line to hit the Sharks with a double-strike inside two minutes.

This time, McKenzie kicked the conversion and the score sat at 29-23 with ten minutes left.

With time up on the clock, the Sharks mounted a gruelling 17-phase assault on the Chiefs’ defence.

An incredible diving tackle by Tyler Ardron to snaffle Curwin Bosch may have saved the match for the hosts, and an eventual knock-on signaled the end of the game, handing Waikato the win.

The Sharks return home to play the Lions and Hurricanes at Jonsson Kings Park in the next two rounds, while the Chiefs travel to Eden Park to take on the Blues next Saturday night.