Before leaving university, my mentor gave me a great final word of advice as I left into the big wide world.

He told me that an employer will hire for attitude and train for skill.

In other words, always have a good attitude.

The AFL is a little different.

As long as you have great skill, you will succeed.

In 2019, too many teams are learning that, in any industry, you cannot have one without the other.

That’s a lesson Carlton are learning pretty quickly in 2019.

Despite sitting a game in last place on the ladder, Carlton’s performances have been more spirited and encouraging than anything we’ve seen from them over the last few years.

But that all came to a halt in Round 7, when they were on the receiving end of a 58-point loss to fellow strugglers North Melbourne.

It’s as if we jumped in a time machine and travelled back ten months.

Ed Curnow’s comments after that embarrassing loss suggests that there’s still a fair bit the baby Blues have to work on.

“We came to the assumption that a lot of us just thought it was going to happen and thought the effort and contest work where we’ve been so good, we were just going to roll into the game and we were going to be able to deliver that kind of consistent effort which has been strong all year,” Curnow said on SEN last Monday.

That seems like an odd attitude to have when your club has won three games from your last 40 matches.

And when asked about where that attitude came from, it took the players a while to admit that it came down to outside influence. 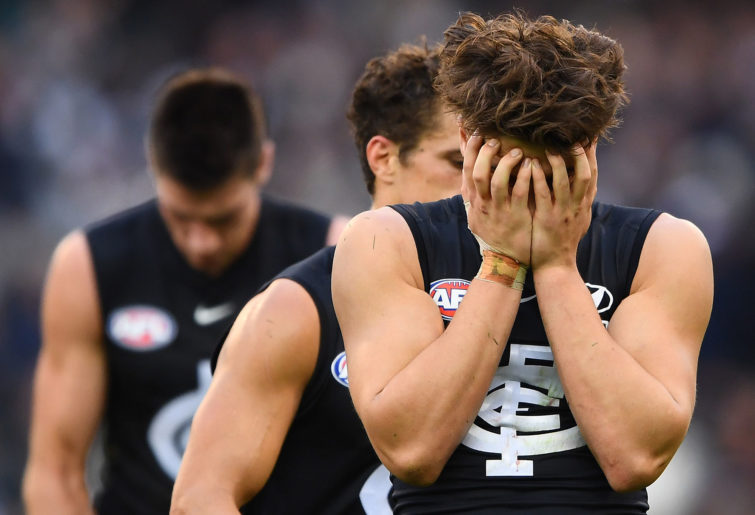 At first he didn’t have a response, before stating that there is so much media in today’s game and “so many angles” that perhaps the hype got to their heads.

And if that’s the case, it makes total sense.

So after a very encouraging six weeks, the media were back on the ‘Carlton are going nowhere’ train in an instant and the Blues responded with a competitive, classy performance against Collingwood.

While the game was in the balance for much of its duration, the Blues walked away without the win.

For those watching the game, you’d know the final score line flattered the Pies.

Neither side should’ve won the game by more than a goal.

And the fact that Carlton – despite the effort – walked away with nothing again has to raise some eyebrows… and questions.

How many more pats on the back can one club receive? The fans deserve something more to celebrate than the potential for things to turn around.

“They’ve given their heart and soul for three quarters and 20 minutes before falling away late."

As for the media hype, that’s for the inner sanctum of the club to manage.

Believe in yourself but not to the point where you think you can show up and win any game.

Because for all that effort – which has been great – they’ve still only won one game so far in 2019.

For the record, North has won its last five games against the Blues by an average margin of 58 points. Hardly the side Carlton shouldn’t prepare for, if there was one.

But the Blues are not alone.

There are multiple sides that thought it was just going to happen for them in 2019.

North Melbourne, too, sits in that category.

They brought in a few recruits based on what they thought they were missing and then expected to charge right into the top eight.

Except that they changed their game style to one they’re probably not talented enough to execute – and are all of a sudden being exposed in the centre by the 6-6-6 rule, despite being a strong clearance side.

Against Carlton, with their backs against the wall, they produced their best performance of the season.

Carlton barely showed up, but they looked like a much better side.

That win was backed up by a strong performance against Geelong, who ultimately outclassed North when it mattered.

But the Roos’ game plan was better, with more running and less backwards kicking and over-possessing.

They made five changes going into the game and the balance looked right.

And the kids are coming through nicely.

Maybe a crash back to reality and a rough start to the season is what the Roos needed.

It is certainly what the Demons needed, who have without a doubt been the most disappointing side of 2019.

They’ve won just three games in 2019 – two of them by less than a goal, and on the weekend against the Suns, the Dees were 50 seconds away from flying home without the four points.

So far, Melbourne have resembled the side that fell to West Coast in the preliminary final last year rather than the side that got there in the first place.

Coach Simon Goodwin decided not to put his players through the replay of the game and move on to bigger and better things this year.

That hasn’t worked out well for them so far.

Instead of addressing what went wrong and looking to improve on it, it was swept under the carpet as if it didn’t matter.

Essendon also haven’t lived up to the expectations many had of them ahead of the 2019 season.

They have started this season exactly the same as the last – poorly.

But is that Essendon’s fault?

According to the media, no.

In the last three weeks, they’ve been ‘robbed’ of two victories.

It’s not due to slow starts or poor decision-making, it’s because of every other factor outside Essendon’s control.

Essendon and Melbourne have both shown their best is good enough. So put in the hard yards and work hard to play your best.

Look how quickly Adelaide has turned their season around.

You could argue Brisbane are exceeding expectations, too.

Did we expect the improvement? Yes.

Expect them to be sitting equal third on the ladder, eight rounds in?

The competition is the most even it’s been in years and there was always an expectation that plenty of sides would improve.

But the teams working harder each week are the ones reaping the rewards right now.

Every successful business or career demands hard work behind the scenes.

AFL clubs are no exception.

Time to stop expecting things to happen. They must take fate into their own hands and work hard for success.

And shake the attitude.

Because it doesn’t look good on anybody.