Perth Glory taking on Sydney FC in next Sunday’s grand final is the blockbuster the A-League needed, but something must be done about policing at games.

This should have been a celebratory column.

If there was any doubt that Sydney FC could match it with the best team in the competition, they dispelled it with a brutal 6-1 annihilation of Melbourne Victory in Kogarah last night.

But events in the stands – where the New South Wales Police evicted long-time Sydney FC supporter Rory Carroll after he attempted to take his daughter, who has special needs, to use the disabled toilets – has put a damper on proceedings. 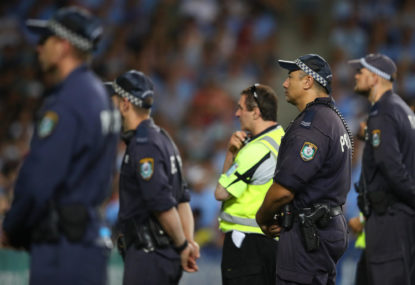 I should preface this by stating that I wasn’t at the game, nor have I had the chance to speak to Rory about what happened.

I fully acknowledge that my understanding of the events is taken from the same social media footage everyone else saw.

But I’ll tell you why this is a subject that needs to be discussed and offer some personal insights while I’m at it.

It’s because I can’t remember the last time I attended an A-League game as a fan and wasn’t hassled by a member of stadium security or police for my troubles.

I often buy tickets to A-League games and regularly attend with my wife and our friends.

To suggest it’s a markedly different experience to attending other sporting events is an understatement.

I know this because I scored a couple of free tickets to the NRL’s Magic Round at Suncorp Stadium on Saturday and my wife and I were two of the 37,521 fans who filed through the gates on the day.

The difference in attitudes between stadium staff and the police was stark.

It started when my wife was magically waved through without anyone checking the contents of her handbag. That has never happened at an A-League game.

I was even more astonished when we walked through to the concourse and saw thousands of fans milling around behind the goals.

Yet when I tried to have a chat on the concourse with a member of Brisbane Roar supporters group The Den a few months ago, we were told to move on no less than three times within the course of a five-minute conversation.

When I asked the stadium staff member why, we were told the concourse had to remain clear of “fire hazards”.

Didn’t seem to be a problem for Magic Round, though.

Why is that? Probably because there’s one rule for A-League fans and a different rule for every other sport.

And the only time I can remember the police being a help and not a hindrance at an A-League game was the 2015 grand final at AAMI Park.

I happened to be enjoying a quiet drink in the pub with some away fans long before kick-off when a senior constable from Victoria Police took a few of his staff members in and introduced them to the visiting supporters.

It was a smart piece of proactive policing that ensured both sides of the thin blue line had to at least think about putting a face to a name.

But as someone who regularly attends A-League games as an away supporter, more often than not I’ve seen police seemingly looking for any excuse to get amongst it.

And much as I’d prefer not to over-exaggerate things, it’s my honest opinion that some police and security personnel believe that working at an A-League game gives them a licence to harass ticket-holders.

What is Football Federation Australia doing about this?

They’ve been told time and time again that fans are unhappy with the match-going experience.

But surely we’ve reached a new low when a bloke can’t even take his young daughter to use the bathroom?

The A-League has a serious problem with policing.

It’s high time they did something about it.

EDITOR’S NOTE: NSW Police have rejected the man’s claims, with Assistant Commissioner Mark Walton telling 2GB that the information he received is that the father tried to access the grandstand on his own and pushed past security.