The two historic playoff runs of Kawhi Leonard and Giannis Antetokounmpo have led sparked NBA fans to compare these them to two of the greatest this game has ever seen – and now we get to see them go to war to the best of seven games!

Although the two may be of different builds and personalities, Kawhi and Giannis are the modern-day reincarnations of Michael Jordan and Shaquille O’Neal.

Kawhi Leonard
This post-season, Kawhi is dominating his opposition on both ends of the court in a Jordanesque fashion, currently averaging 31.8 points-per-game in the playoffs while being the second most efficient player behind big man Nikola Jokic.

Showcasing his elite mid-range and tough shot-making ability in the moments where it counts most – clutch time. In what has been a historic playoff run, The Klaw most recently created history when sending Joel Embiid and Philadelphia 76ers home with nothing but a swarm of tissues.

With four seconds left on the clock in game seven of the series, Kawhi hit one of the toughest game-winning shots in NBA history – it was the first buzzer-beater in a game seven.

Not to mention he got the shot off over 7’0 Defensive Player of the Year candidate Joel Embiid to ice the game and add his 41st point. The only other players in NBA history you could imagine making that calibre of a shot would be none other than the likes of Kobe Bryant and Michael Jordan. 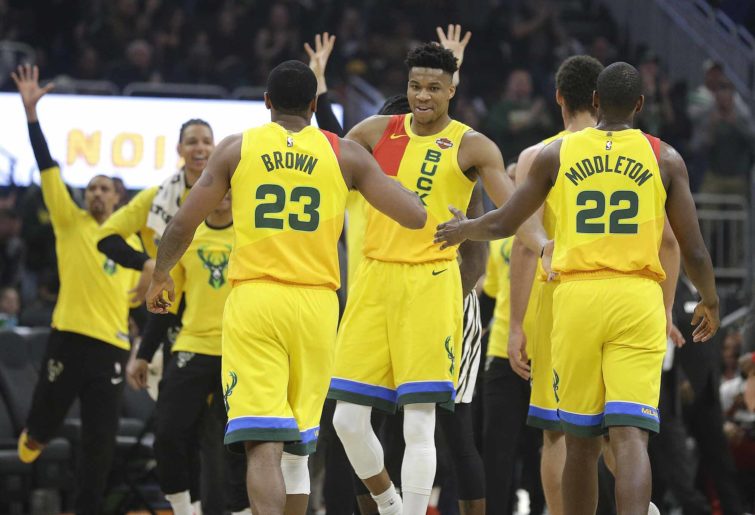 Giannis Antetokounmpo
Shaquille O’Neal himself handed the title of ‘Superman’ over to Giannis, and like Shaq, Giannis has been the most dominating force in the NBA. Leading the Milwaukee Bucks to the Eastern Conference Finals with only one post-season loss.

Averaging Shaq-like numbers of 27.4 points and 11.3 rebounds while adding 1.2 steals and 1.6 blocks per game – and what is crazy is he has only played 38-plus minutes once in his nine playoff games. However, the one thing Shaq didn’t have was a three-point shot, with the Greek Freak hitting 32per cent of his shots behind the arc in the playoffs.

Although Giannis hasn’t been showing his talents off in the clutch like Kawhi, he isn’t allowing for the team to be in that position, with the closest game being a win by seven points against the Celtics. Apart from that game and the one loss, the Bucks have won by 12-points or more each game – winning by 20 or more on five occasions, including a 35-point blowout.

Who leads their team to the finals?
You can make great cases for both sides to triumph to the finals, and obviously, a series is decided by more than one lone player – but this is more about Giannis versus Kawhi rather than the Raptors versus the Bucks.

But which of the two will replace LeBron James as the representative for the eastern conference? It’s a tough question and I’m guessing we will be gifted with another long series – but MJ won six and Shaq won four, and I’ve got Kawhi coming on top here.

There is no one in the league who can guard Giannis, but I’m a firm believer The Klaw can make another trip to the NBA finals and continue to write history.

Being an NBA Finals MVP, he already has the championship blood and he has just been the better player during these playoffs.

I’m not knocking the talent of Giannis and the Bucks, who have only lost one game and putting up historic numbers as a team, but they played a Pistons squad without Blake Griffin for two games then faced a dysfunctional Celtics side who had more problems than one could imagine.

On the other hand, the path handed to Kawhi and the Raptors wasn’t of the same ease. He disposed of a hungry Magic team in the first round, a team which had a bunch of talent. Then they were stacked against the Philadelphia 76ers who had an insane starting five of five worthy all-stars. And yes, it took him seven games to knock them off, but in the end, The Klaw ended them in style.

This series will have plenty of close games and is the rare type player that you can give the ball to and take the team to the promised land.