The AFL’s administration has failed and it must be changed

No more. The AFL executive has lost its ability to govern itself, and it cannot be allowed to continue this way for the good of the sport in this country.

Let’s get one thing crystal clear at the outset: by its actions over the past 18 months, the AFL has allowed the integrity of its competition, and the discharge of good and proper administration, fall away.

This was supposed to be the year of celebrating and indulging in what’s great about this sport, after the sham of a process we were subject to regarding the “state of the game” and the pressing need to rewrite the fabric of the code last season. How’s that working for us in 2019, by the way?

Instead of celebrating, we are knee deep in a swamp of maladministration, misapplication of rules and regulations and endless chatter about things peripheral to the sport itself.

As Roar Expert Adrian Polykandrites noted on Twitter over the weekend, when was the last time an actual football story, about a team winning or losing, was the lead story out of a round of football? It certainly hasn’t happened this year.

The events of the past four days have done this column in. No more pretending like things are fine, and watching the West Coast Eagles do everything in their collective power to avoid a premiership hangover.

No more sitting back and enjoying the work of the GWS Giants who, this weekend withstanding, have put it together. No more basking in the glory that is the Richmond small ball forward line, shredding a highly rated defence as the sun set at Optus Stadium.

Gillon McLachlan, Steven Hocking, and the rest of the administrators at AFL House with power over what happens in this competition must be held to account for what they have overseen. The devolution of the AFL into a rolling farce, where barely a week goes by without some form of real or media-driven scandal. They have bought this on themselves, via unwilling ignorance, blatant incompetence, or perhaps both.

Eight rounds in, it is clear the AFL’s rule changes have failed. Instead of leaning against the trends in the game they have reinforced them: scoring from kick-ins is down, teams are winning the ball back from kick-ins at a much higher rate, and scoring from centre bounces has barely moved a goal a game. Aggregate scoring is down, even though a completely new category of scoring – the Administrative Goal – has been created via the hilarious tragedy that is the 100-metre penalty.

In addition to the very public rule changes, did you know the AFL completely re-wrote the rule book in the 2018 offseason? I bet you didn’t, because they didn’t tell anyone. They instead released a completely new rule book to the media just before Round 4 got underway, and put it on their website without telling anyone more than a week later.

I bet you also didn’t know that rule book has completely re-written a number of fundamental laws of the game, including holding the ball, contact below the knees, and what is deemed to be acceptable and prohibited contact in a marking contest?

No wonder fans have no freaking clue what is considered a free kick and what is acceptable play this season. A clutch of senior umpires (Justin Schmitt, Scott Jeffrey and Troy Pannell, with a combined 907 games of experience) retired at the end of last season: did they see this mess coming?

Umpiring the game is harder than ever. (Photo: Scott Barbour/Getty Images)

One rule which has not changed, and which has been a rule for a very long time, is that shaking the goal posts is not allowed.

Essendon should protest Friday night’s result. I hope they do, because this is one of the most obvious ways the AFL can and should be held to account for its failings.

The AFL and the umpires that it entrusts with the execution of the AFL rules during AFL-sanctioned games has failed in its duty to fairly and dutifully administer the competition. The CEO himself said it on ABC Radio on Sunday: “well yes, technically [it is a free kick]”.

The “but” McLachlan added after that statement doesn’t matter, and neither do any of the following notions:

We cannot draw a line around the kinds of actions which signal an intent to commit the act: if the post shakes and it’s because the player has done something to make the post shake, then the player is at fault.

This isn’t the Castle. It’s not about the vibe. The entire concept of “pragmatic umpiring” can get in the sea as far as I’m concerned.

The action should have resulted in a free kick being paid to Myers, from the goal-line, and an Essendon victory. How do I know it would’ve been a victory? There hasn’t been a set shot missed from ten metres out directly in front of goal since 2012, when the data was first collected. It’s an automatic six points.

This is not a normal situation. Umpires miss free kicks once a minute in this league, because there are too many rules and not enough umpires. In this case, the umpire acknowledged Rampe was breaking the rules, because he asked Rampe to remove himself from the post, but failed to apply the laws correctly by awarding a free kick.

Given the siren had sounded, and Myers would have kicked for goal in a spot where a goal is a certainty, and that goal would have changed the match margin from a five-point Sydney win to a one-point Essendon win, this does not fall into the category of any standard error on the part of the umpires.

The Rampe situation – Postgate if you will, as much as I hate the -gate suffix as a general principle – is no different at a basic level to the Sirengate incident of 13 years ago. The AFL has not fulfilled its duty in administering its rules and regulations in a way that has directly and verifiably impacted on the result of one of its matches. The chief administrator of the AFL himself said as much: it should have been a free kick.

The Bombers have been conspicuously quiet on this to start the week. One only hopes it is because the club is considering its options. We do know Essendon has QCs across Melbourne on speed dial.

To make matters worse, the AFL’s head of umpiring took about 13 seconds to sign off on the field umpire’s decision after the match and state the action wasn’t sufficiently egregious to constitute a rule breach, only for that to be somewhat contradicted by the CEO 36 hours later.

The Match Review report of the match failed to even acknowledge Rampe had breached the AFL’s Tribunal Guidelines by shaking the post, even though it is clearly an offence that attracts a sanction. Indeed, it didn’t even warrant a mention in the Match Review Officer’s “Other Incidents Requiring Explanation” section.

When asked about the incident at his weekly press conference, Match Review Officer Michael Christian curiously responded that the Rampe issue had been taken out of his hands, and he couldn’t explain why.

Michael Christian says he wasn't told why the Dane Rampe matter was taken out of his hands.

All told, the AFL knows it has a significant mess on its hands, and it has done everything in its power to sweep it under the rug. It has even called for a “please explain” from Rampe himself, which he responded to – I assume – via a video posted on the Sydney Swans social media channels. The critical line: I didn’t intend to shake the post.

A cynic might suggest a very deliberate annunciation of that phrase. A realist might say it shouldn’t matter. The cynic would retort it doesn’t matter, the AFL has Rampe on tape talking about his intent, so the incident is closed.

On intent, the AFL admitted yesterday Gary Ablett intentionally struck Sam Wright in the head with the point of his elbow. So Gary Ablett received a sanction from the Match Review Officer, right? 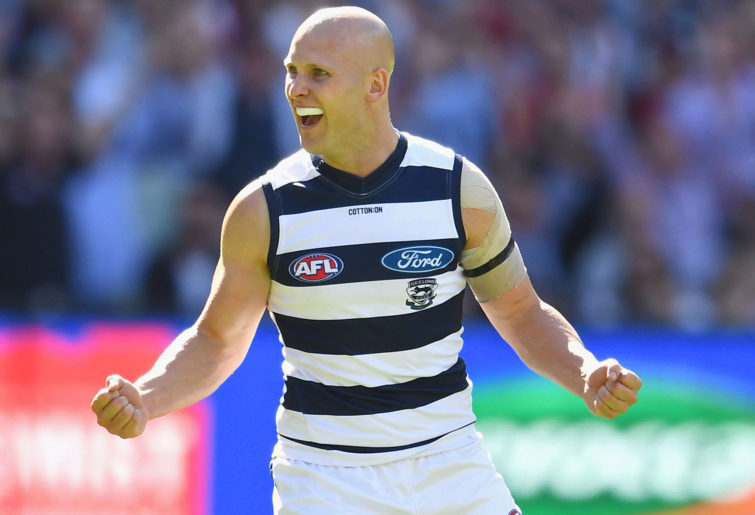 I’m tempted to say this is an even greater instance of maladministration, if only because it is far more outrageous, egregious and preposterous. However, we’re talking about the difference between a fine for a single player and the result of a game in the 2019 AFL premiership season.

No matter which way you read the AFL’s Tribunal Guidelines, Ablett should have been fined for his hit on Wright – particularly once the incident was judged an intentional strike.

The guidelines deal specifically with incidents where the ‘impact’ is considered negligible, and instruct the Match Review Officer to consider the potential for injury based on a striking action, instead of the impact of the action itself.

There are even two ways Ablett could’ve been fined once it was acknowledged he struck Wright. The AFL chose neither of them, for reasons known only to them.

Once Christian and his crew decided Ablett intentionally struck Wright, that’s game over guys. He committed an offence and should have been cited as such. What happened to the drive to reduce strikes and punches from the professional game?

Outside of ice hockey, show me another ball sport that abides cheap shots for the sake of “making someone earn it”? There isn’t one, because most other sports wised up to the idea that punching isn’t fundamental to their code. I thought we’d decided that too, but apparently not.

The state of the judiciary in this league is simply another example of the AFL failing in its sole duty to properly administer this competition.

At some point, the AFL Commission must surely intervene in all of this. Chairman Richard Goyder has run the most powerful conglomerate in Australia, and now chairs two of Australia’s most powerful players in Qantas and Woodside. A rolling mess of errors, missteps and poor governance by Alan Joyce or Peter Coleman simply would not be tolerated. They would be removed.

The AFL loves to toot its own horn and call itself a billion-dollar industry. As it stands, it does not have an administration that is fit to run a million-dollar small business, let alone a billion-dollar enterprise. While it can point to a bountiful broadcasting agreement, live sport is to a media company as water is to a man stumbling through the Great Sandy Desert.

You don’t win a prize for being the one holding the last canteen of H2O. 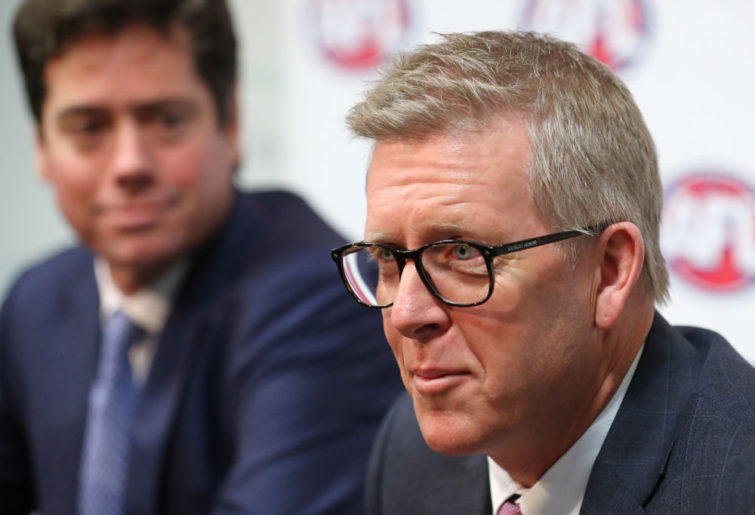 Grassroots participation might be rising, but that’s got very little to do with AFL House and everything to do with the work of volunteers and hard-working community clubs, who could do far more good with the cheque McLachlan and his band cut to run AFL Media than that entity could hope to achieve in a century.

The dollars are beside the point. The AFL, and the AFL executive, have one job, and that is to provide good governance to the Australian Football League. Alastair Clarkson might call it process over outcome. Right now, the AFL executive is failing at the process, and the time is approaching for it to be replaced before the outcomes begin to suffer.