When FOX Footy published their 2019 season predictions on March 21 this year, 15 analysts predicted the premiers, Coleman Medalist, Brownlow winner, wooden spooners and other key predictions for the season ahead.

All 15 analysts picked the Gold Coast Suns to “win” the wooden spoon. Some analysts found it hard to see games the team could win. But through eight games, the Suns are 3-5 and in 14th, a record on par with preseason finals contenders Essendon and Melbourne with a few particular players helping the team emerge as one that can be competitive when it wants to be.

They would be 3-4-1 if not for a freak behind scored by Tom McDonald against the Demons on Saturday afternoon, and are punching well above their weight so far, even if they are still leaning towards a bottom four finish.

A few bright stars have emerged on the Suns team this year, and while their statistics could be bloated by playing on a list deprived of talent, they have still proven themselves to be quality players in 2019.

One of the best on the Suns this year is Brayden Fiorini, who has averaged a team high 27.6 disposals and a solid 5.3 tackles this year (third on the team) in his fourth year as a former late first round pick from the Northern Knights. He is playing like the team’s best player and leading the Suns in disposals despite missing the one point loss to Melbourne on the weekend. 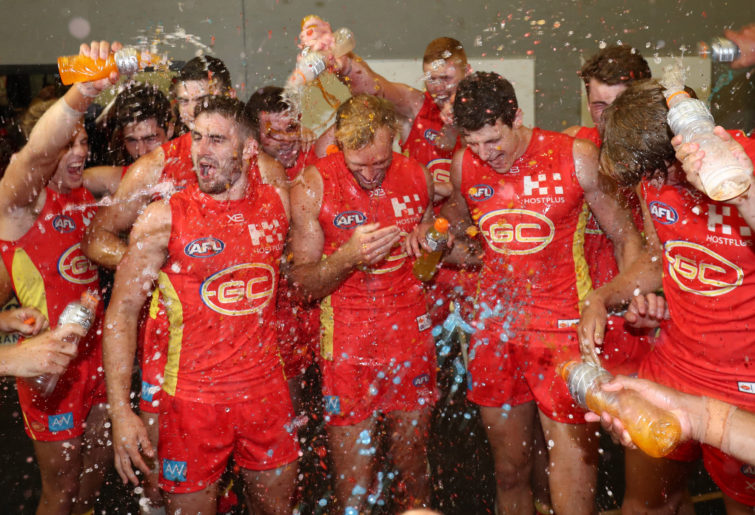 Having played just 44 games from 2015-2018, it seemed like most of the football world had forgotten about 2010 first overall pick David Swallow, the team’s first ever national draft pick.

However those at the Suns still knew he was valuable (the five year extension he signed last November helps with that), and having been named their co-captain for this year, he has been a shining light with 23.6 disposals a game, showing flashes of the skillset that made him such a talented junior prospect coming out of the WAFL.

A former late round pick (#88 in 2011), Alex Sexton was just a filler player in the forward line leading up to a 2018 campaign where he lead the Suns in goals, with an iffy 28 goals (they couldn’t get much going forward.

But with Peter Wright stepping up and Jack Lukosius coming into the forward line, Sexton has already hit 16 goals through eight games (on pace to hit 44 for the season) and is their main option forward.

Their midfield has got better. Though Lachie Weller has underwhelmed considering he was traded for the #2 pick in 2017, he has been a solid contributor, as has homegrown talent in Touk Miller and Jack Bowes, who scored the infamous game winning goal against Carlton in Round 4 to give the Suns a huge win.

Will Brodie has been solid when he has played, and #3 pick from 2018 Izak Rankine hasn’t even debuted yet. He could be the best of the bunch among their young prospects with his explosiveness and pace, and when he comes in their once dire midfield will look noticeably better on paper.

Down back the team still has a lot of work to do, but #6 pick from 2019 Ben King is an incredibly talented prospect, while Sam Collins has a match-saving mark against his former team (Fremantle) so far this season, having been a pretty good contributor in his first year up north.

Of course for the expansion Suns, the same issues remain. Guys want to go home to Victoria or other states, and the team usually trades them out for pennies on the dollar (Jack Scrimshaw from Hawthorn is the most recent example of this) and the hope is that these issues will fade away.

But the team has made an emphasis on acquiring high quality guys who want to be on the Gold Coast (drafting two SA guys with top three picks to stay together helps too), but the Suns need to get better too.

The main point is that the Suns, in 8+ years of AFL football, haven’t made a single finals series yet, and they shouldn’t be expected to anytime soon.

But the organisation is taking massive steps to improve, and even if bad, this team has enough young talent to at least be fun for a little while.

Professional women’s sport is dynamic, inspirational, and has the ability to be an easily viable product in the tough Australian sporting market. However, this high perception often struggles to be maintained. Throughout social media, every moment is met with heavy criticism and the media coverage is often lacking the wider impact that men’s sports may […]