With her big Saturday looming, independent candidate for Warringah Zali Steggall would no doubt welcome a few accolades like those given recently by a South African author to her grandfather Jack Steggall.

In his book, The Waltzing Wallabies, prolific South African sports historian Hans Saestad tells the story of the first tour to his country by an Australian rugby team.

The 1933 expedition – in which the Wallabies won two of five Tests – was an eye-opening and sometimes eye-blackening experience for both sides.

Jack Steggall – who had played five Tests in various positions against New Zealand opposition – was selected as a centre for the tour but had to take over as fullback when the team’s captain, Alex Ross, was forced to the sideline by appendicitis.

“Although one of the smaller backs, he was a real asset to the team. Fortunately for the tourists he had some experience of fullback play, but only in minor matches. When the captain could not play in the Test matches… it was Steggall who stepped forward and he was not found wanting.”

Steggall played the first four Tests of the tour at fullback and was able to revert to his preferred centre position when Ross returned for the fifth Test in Bloemfontein.

“Like most smaller players he was very fast off the mark. His work rate was high and he played in 16 matches, including the five Test matches and scored nine points,” Saestad wrote.

Steggall, who was born in Western Australia, had lived in Toowoomba and played for the YMCA club in Brisbane.

He weighed a little under 67 kilograms when he was selected.

By the time of the first Test, the South Africans had decided that Australia’s weak point would not be in the back line and the hosts played dull, forward-dominated rugby to secure a 17-3 victory in a violent match.

“Steggall was having a great game,” the game report included. “He prevented a kick from [Bennie] Osler going out almost on the corner flag in splendid fashion, and dodged two fast-moving forwards to send play back to midfield with a great kick.”

In his match summary, Saestad added the following.

“No more determined game was played than by Jack Steggall… who never flinched in the face of the most awesome onrushes and on several occasions his fragile body flung itself at the legs of a stampeding giant trying to break through by sheer force and weight to score. It was certainly not Steggall’s fault that 17 points were scored against his side.”

There wasn’t much enterprising rugby in the first Test and it was all played by the tourists.

Subsequent media pressure led to the Boks joining the Australians in the running game in the second Test.

After an all-brawl at the kick-off – the referee left the field and only returned when the fighting stopped – the home team found itself in unfamiliar territory and lost 21-6.

Saestad described a key moment: “A South African attack of dribbling the ball had Steggall rushing up to pick up the ball off the feet of the forwards and he then cut across field to feed the ball to [Victorian Bob] Cowper.”

The ball then passed through several Australian hands before one of the team characters, ‘Wild Bill’ Cerutti, scored under the posts.

The dramatic turnabout between the first and second Tests in 1933 was still being discussed by South Africans 30 years later when the 1963 Wallabies arrived. A fair number of the locals thought the Boks had been conned.

The ’33 Springboks reverted to type to win the third and fourth Tests, controlling possession and kicking for territory. 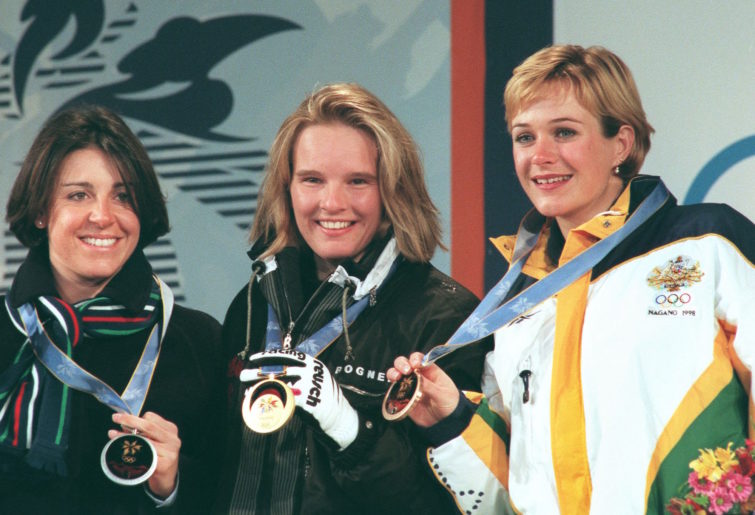 Champion Olympic skier Zali Steggall is running for the seat of Warringah in the federal election this weekend, 21 years after winning bronze at the 1998 Nagano Games. And her grandfather Jack also boasts a storied sporting past. (Boris Horvat/AFP/Getty Images)

Saestad reports that Steggall played well in the third Test, while the fourth Test was especially drab.

However, the tour-hardened Wallabies – with their captain back in action and Steggall partnering Cowper in the centres – cut loose in the fifth Test to win 15-4. Cowper and Steggall were in top form, according to Saestad.

Steggall played ten Tests for Australia and was praised consistently for his poise, skill and courage.

One try he scored against the All Blacks was discussed for decades in New Zealand as “Steggall’s try” and was rated by various commentators as one of the best individual efforts of all time.

Steggall’s son Jack was a respected fullback for Northern Suburbs in Sydney in the 1960s.

He played under John Thornett’s captaincy and enjoyed successive premierships in 1963 and 1964.

The younger Jack’s daughter, Zali, showed great promise as a slalom skier and the family moved to Europe for a time to maximise her opportunities.

She won Australia’s first Winter Olympics medal, a bronze in the slalom at Nagano, Japan, in 1998.

The following year she won a gold medal at the World Championships in Vail, Colorado – another Australian first.

Father Jack – well known in Manly after years of practice as a solicitor – now lives within a decent drop kick of Manly Oval and is supporting Zali’s campaign to unseat another formerly well performed sportsman, Tony Abbott.

The Waltzing Wallabies is the latest in a series of books by Saestad on tours to South Africa and tours elsewhere by Springbok sides.

The book has a sky blue cover in recognition of the fact that the Australians played in sky blue jerseys, like those taken to the world by the Waratahs seven years earlier.

By 1933, the Wallabies usually played in dark green, but the blue option averted a clash with the Springboks’ colours.

There is no record of how the 11 Queenslanders and four Victorians in the team felt about wearing NSW’s colours.

The writer of this piece, Mike Jenkinson, is the lead author of A Dangerous Breed. The excellent African adventures of the 1963 Wallabies.

Glasgow have farewelled Dave Rennie a month early, leaving the new Wallabies coach clear to direct all energy towards his Test job. Incoming Wallabies coach Dave Rennie has agreed to end his contract with Scottish club Glasgow early, freeing him up to focus on his new role. Glasgow announced Rennie would finish at the Warriors […]