The AFL season continues to pick up steam, with a host of intriguing matches set to make Round 9 another headache on the tipping front.

We start with a preliminary final rematch in Perth, before Saturday gives us three matches that, like a 45 degree angle set shot from 30 out, look straight forward enough but still make you very anxious. Sunday looks a little easier, although that Richmond-Hawthorn blockbuster is a tough one.

It was sixes across the board for just about all of us last weekend, with myself, Marnie Cohen, AdelaideDocker and you – The Crowd – all launching it over the rope. Daniel Jeffrey, however, was only able to manage four.

That means it’s AdelaideDocker still out in front on 46, trailed narrowly by The Crowd on 45. I’m on 42, Marnie’s on 41, while Jeffers is starting to lag behind on 37.

Best of luck to everyone with their Round 9 selections!

We return to the scene of a grisly crime from last September, with West Coast and Melbourne set to lock horns since that horrifically one-sided preliminary final.

Despite knocking off the Eagles by 17 points at the same venue in Round 22, the Demons were unceremoniously demolished in the first half – heading to the sheds down 69-6 without having kicked a goal.

Much has been made of Melbourne’s awful start to the season, but West Coast haven’t been extraordinary either. This is largely based on a hunch, but I’m backing the Dees to stun everyone and get their season back on track with a massive upset win.

Saturday’s selection of matches is a bit of a mix. Collingwood should have no trouble accounting for a St Kilda team who’ve started to lose their way a bit, while Geelong should run over the top of a Bulldogs team who haven’t notched a win at Kardinia Park since 2003.

The other matches require a bit more thought. I’m still backing Brisbane as a the real deal in 2019, but they’ve got to navigate a woeful recent record against the Crows if they’re to avoid dropping two straight.

They may have been able to crack their Swans hoodoo recently, but Adelaide look to have really turned the corner over the last month and should have the mettle to escape Queensland with a hard-fought win.

Are the Crows finally ‘back’? (Photo by Daniel Kalisz/Getty Images)

Saturday night’s matches are also quite tough. The general vibe of late appears to be that Essendon are huge disappointments and Fremantle have been surprise packets. As tempting as it is to jump on the Freo bandwagon, the last three weeks make for interesting reading.

The Bombers lost to one of the premiership favourites (Collingwood) by under a kick, joined a long list of clubs in getting touched up by the Cats, before faltering poorly against the bottom-four Swans – albeit in controversial circumstances. Freo, for all the praise they earned in knocking off GWS, have since barely scraped past the Bulldogs at home while getting outclassed by Adelaide and Richmond’s VFL side.

At Marvel, the tip has to go Essendon’ way.

Much will – and has – been made of North Melbourne’s strong record in Hobart, but people are forgetting that two of their four losses in Hobart have come against the Swans. In fact, Sydney have never lost in Tasmania. I’ll back them to continue that streak.

Sunday looks to be a fair bit easier. Port Adelaide should be able to notch a comfortable win over improving Gold Coast Suns – who’ve not won in South Australia since their famous maiden victory in 2011.

I think people are reading way too much into Hawthorn’s strong win over the Giants a week ago. GWS are 2-14 at the MCG! As undermanned as Richmond are, they keep finding a way and they’ll do so against a side they boast a strong recent record against.

Improved form from Carlton is always a welcome sight, but it’s hard to see them backing that up against the Giants in Sydney. In fact, GWS are my shoe-in of the week.

Is it just me, or is this season flying by?

We are looking ahead to our ninth round of the season and there’s been more drama unfolding each week than we witnessed in Married at First Sight!

The biggest drama this week was Dane Rampe climbing the goal post, talking down to the umpire and no one having any idea how to handle it. The whole thing was totally mismanaged by the AFL and has made Sydney’s week about everything but their game against North Melbourne this Saturday night.

They go into the game again without Buddy and up against a much improved North outfit. This will be North’s first of four games in Hobart this year, the most they’ve fixtured in a season since they first started playing down there in 2012.

It’s become a bit of a fortress for the Roos and seeing as they accept the game to just about lock in another win for the year, it better be worth it. I think it will be.

The second biggest drama this week was both Nat Fyfe and Gary Ablett getting cleared for swinging their elbows at opposition player’s heads. I think they’ll lead their sides to victory. 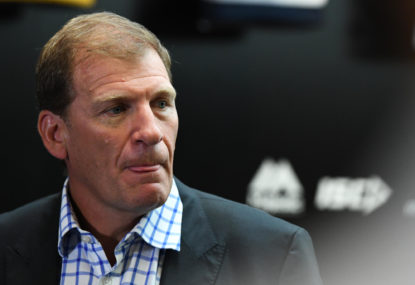 LISTEN: Why does the AFL keep getting it wrong with suspensions?

Brisbane versus Adelaide is the hardest one to tip for the round. The Crows are in red hot form and Brisbane are looking to bounce back, which we know they’re capable of.

I’m tipping Brisbane simply because they’re at home. Again, this could come back to bite me but I love what I have seen from the Lions so far this year and I really think they could make a huge statement winning this.

Collingwood will become the first team this season to win a game after facing Carlton the previous week. I have no doubt they will be looking to improve on their very ordinary performance against the Blues.

As impressive as Richmond were against Freo last week, I think the injury to Toby Nankervis may be the tipping point and coming up against an in form Ben McEvoy will be a tough task. I’m tipping Hawthorn.

I’m also tipping Port and GWS to bounce back.

Finally; West Coast. I can’t believe Melbourne still haven’t watched the preliminary final from last year. The way they’re going, we could be in for a live replay on Friday night. It will most likely take more than a last gasp poster to steal victory from the Eagles.

As before, the above tips are genuinely Daniel Jeffrey’s. However, he is out of action this week and unable to provide a write-up.

Please imagine some cutting-edge analysis in this space. Or don’t, I’m not a cop.

Round 8 was a decent week for myself – excluding Freo’s capitulation in Perth. Onwards, I must forge – it looks to be a ridiculously tough week, though.

Round 9 begins with the West Coast Eagles hosting a recovering Melbourne. The game was nowhere near Melbourne’s grasp in last year’s preliminary final, and they’ll need to be a lot stronger on Friday. The Eagles have got a few victories under their belt of late, but Melbourne, too, have narrowly won their last two.

On the grounds of Optus, I’ll be expecting the Eagles to win.

Saturday’s full of closely-fought contests, and not just the election. Collingwood and St Kilda are first up and, while the Magpies are favourites, the Saints will see them as vulnerable owing to last week’s struggles. I can’t go past tipping the Magpies though, despite the always constant feel of a Saints upset.

Adelaide and Brisbane battle each other a little later in the day, and this is a super tough pick. The Lions have been decent at home, while the Crows have been getting into some real good form coming off a Showdown win. Flip a coin for this one, but I’ll reluctantly tip Adelaide.

Geelong host the Western Bulldogs next and, with the Bulldogs being particularly inconsistent this year, one would expect the Cats to win this one.

Essendon host a Fremantle side coming off two losses in a key test for both outfits. The Bombers essentially need a win to keep their season alive, while the Dockers would love a win in their first trip to Victoria for the year. Essendon are favourites, but Fremantle have shown they can surprise on the road (see: Canberra). I just can’t trust either side, so I’m going to tip against my own team.

North and Sydney contested probably the most irrelevant game of the week (sorry, Kangaroos and Swans fans). Neither team has been particularly good of late, but I feel like North are due a win, and I’ll tip them purely because this clash is in Tasmania.

The three Sunday games are also big contests. In the first, expect Port Adelaide to bounce back from a Showdown defeat and comfortably beat the Suns, who have a terrible South Australian record. Expect GWS, too, to beat Carlton – although this clash has the smell of an upset all over it.

Sunday’s nationally televised clash, though, is the biggest of all – Richmond hosting Hawthorn at the MCG.

Both teams had terrific wins last week and are relatively on par this season. Expect the game to be won or lost in the midfield – the absence of Richmond’s best ruck stocks will frustrate the Tigers, and Hawthorn should garner enough run through an injury-hit Richmond side to win closely.