Careful Essendon, don’t bite the fans that feed you

Essendon must not allow the club’s off-field prosperity to obscure growing fan disillusionment with its handling of on-field woes.

A club that relied on the remarkable loyalty of its supporters to survive the harrowing supplements saga now risks alienating many as another Bombers season goes up in smoke.

That the Bombers’ recent commercial success has seemingly enabled the unsettling return of old Essendon swagger threatens to place another log on the fire.

While frustration among Bomber supporters over the team’s struggles has simmered for some time, the club’s loss to the Sydney Swans felt like a tipping point.

And for good reason. Not even the smokescreen that was the ‘desperate’ Swans narrative and Dane Rampe goal post shenanigans could conceal the horror of the Bombers’ performance.

While boasting plenty of potential, the Buddy Franklin-less Swans side was as non-threatening a red and white incarnation as we have seen in recent memory. Not to mention Sydney’s aversion to winning on its home track.

But of course, the relative quality of the opposition matters little when the Bombers hit self-destruct mode.

After all, how else can one describe the insanity of Essendon continually launching long bombs into a forward line shorn of the club’s injured tall targets? Not to mention Bomber defenders’ penchant for looking inquiringly at one another while Swans players took contestable marks unhindered inside forward fifty.

That the dismal Sydney showing represented a Groundhog Day to the uber-demoralising 2018 Carlton defeat and likely marked another wasted season was even more maddening for the red and black faithful.

Licking their wounds, Bomber fans looked to the club for reassurance. The same club that had turned their football-following lives upside down six years earlier but never broke their attachment.

But there was nothing enlightening or comforting about John Worsfold’s prickly appearance on Talking Footy on Monday night.

As if Worsfold’s segment was filmed a week earlier, there was barely a reference to the Swans’ defeat, other than to misguidedly lament the umpire’s refusal to penalise Rampe. His expression of confidence in the club’s long-term direction left largely unjustified.

Unfortunately, this was not an outlier. Worsfold’s post-defeat press conferences are more often than not like watching one long head scratch, leaving fans never the wiser as to what might have gone wrong and how it might be fixed.

Throw in the club’s Twitter PR machine – and its endless spruiking of another commercial initiative or glossy shot of The Hangar – and fans are left wondering whether they’re the only ones thinking there might be a problem.

And yet, of course, there are problems.

While the playing list is not perfect – Zac Clarke take a bow – most would agree that the team is underperforming.

Dylan Shiel’s arrival means the club’s struggles can no longer be so easily blamed on the old chestnut that was Essendon’s longtime midfield Achilles heel.

Sluggish early round performances are now likely to have ruined two consecutive seasons. That on each occasion these struggles have seemingly arisen from an inability to adapt to a more defensive game plan have added to fan confusion.

Which circles back to the question of Worsfold’s ongoing viability and the club’s handling of football matters more generally.

While the former West Coast coach is renowned for man management, even former charge Daniel Kerr recently revealed “I don’t think he’s the greatest tactician…” That presumably the club was not blind to this deficiency makes the Mark Neeld experience even more troubling.

The club’s off-season appointment of highly regarded Ben Rutten as an assistant was seen as giving Worsfold the best chance to succeed. And yet it also means there is now nowhere to hide for the head coach and the administration that appears to stand staunchly behind him.

This is not to ignore the significant commercial strides made by the club since the club’s supplements rock bottom, membership and sponsorship gains chief among them. But rather to point out the disconnect with the on-field product, which is of course what matters most to the fans.

A disconnect that was probably best captured by Caroline Wilson mentioning Essendon CEO Xavier Campbell in the context of potential replacements for AFL CEO Gillon McLachlan despite the season 2018 failure and the Bombers sitting on an uncomfortable 3-3 record.

One wonders whether supplements saga-humbled Bomber fans have also perceived the club’s off-field success as having emboldened the administration.

The Bombers’ high handed decision to fly in the face of public opinion and seek to extend its lease at the Melton Country Club pokies is a horrible look for a club trying to claw back ethical credibility.

While less serious, the club playing hardball with the Giants over the Shiel deal – before ultimately relenting amidst the threat of being gazumped by arch-enemy Carlton – was classic old school pompous Essendon. The Bombers passed up a golden opportunity to shed their reputation as a difficult negotiating partner and further the club’s reformation project.

Of course, it will take a lot more to lose a fan-base whose loyalty has withstood the supplements ground zero.

But loyalty and pride are two very different things. It’s time for Essendon to start repaying the faith. 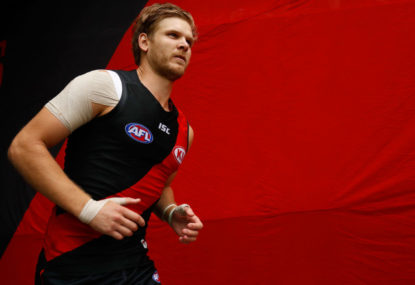