LISTEN: If you're not in the top eight after Round 11, is there any hope of a flag?

The Roar
16th May, 2019
16
Join the conversation
Advertisement
Write for The Roar

Believe it or not, we’re fast approaching the halfway point of the 2019 AFL season – and you’d be surprised to know just how important the ladder is that this point of the year.

Since 2010, at least one grand finalist has been in the top four at the end of Round 11 but, most of the time (five times out of nine), both grand finalists have been there.

In fact, nobody has recovered from being outside the eight after Round 11 to make the decider since Port Adelaide did it in 2007. We all know how that ended…

Given the Round 11 ladder is clearly so important to how the season ends up playing out, we got Roar AFL Expert Adrian Polykandrites on the Game of Codes podcast to predict just who’ll be in those coveted finals spots before the bye rounds kick in.

Did you know someone won the premiership not too long ago despite being in 10th at the halfway point of the season? Reckon you know who it was? We reveal the answer in this snippet.

Can early-season disappointments Melbourne or Essendon find form quick enough to sneak back in? Can early-season surprises Brisbane and Fremantle keep their form up all season?

It's time the AFL fix the advantage rule

AFL officials are constantly figuring out ways to improve the viewing of the game, which most recently has brought more attention to the ‘holding the ball’ rule. 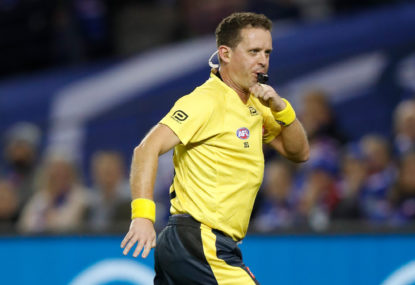 It's time the AFL fix the advantage rule