Tips and thoughts: AFL Round 9

Here I am, running through some thoughts on each game to help us decide who to tip in Round 9.

Friday 17th May
West Coast v Melbourne
8.10pm at Optus Stadium
This sure seems like an easy call on first look. West Coast are 3-1 at home this season and Melbourne have vacillated between mediocre and absolutely woeful all year.

Compounding this is the fact that the Demons will be missing somewhere between 7-10 players who would usually be getting a game for them, whereas the inclusion of Willie Rioli brings West Coast very close to full strength.

If we dig a little deeper though, there is a case to be made for what would be a fairly large upset.

Put simply, the only way Melbourne has won games this year is by dominating contested possession; a statistic that is mostly overrated by the media but in the case of Melbourne seems to be crucial to their game style.

The Demons have an average CP differential of +22 in their three wins this year, a figure that falls to -3.4 in losses.

The good news for Melbourne fans then? West Coast are the second worst contested possession team this year, with an average differential of -13.5 per game.

So will the understrength Demons take advantage of this mismatch? I still don’t think so.

Despite what a lot of commentators would tell you, winning contested ball doesn’t always equal victory.

The Demons were lucky to beat Hawthorn and Gold Coast by a combined six points the last two weeks, despite dominating the contested ball in both games.

They also lost to Richmond by 43 points in a game that they won CP by 11.

West Coast have been far from inspiring themselves since beating Collingwood in Round 3, but the combination of home ground and health should see them get the job done. 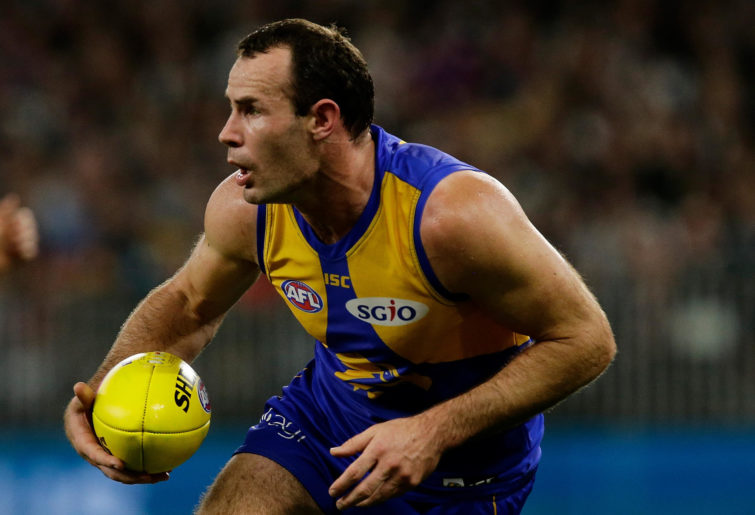 Shannon Hurn’s Eagles are trying to defend their title. (Photo by Will Russell/AFL Media/Getty Images)

Saturday 18th May
Collingwood v St Kilda
1.45pm at MCG
There is not much to say about this one. Collingwood have clearly been one of the top two teams in the league so far, while St Kilda have predictably fallen away due to some key injuries, tougher competition, and general inability to score.

The Pies did take almost four full quarters to put away the lowly Carlton last week, but it would be surprising if they didn’t comfortably dispose of the Saints.

Brisbane v Adelaide
2.10pm at GABBA
The first tough call of the week; it’s a home game for Brisbane (3-1 at the Gabba so far) but Adelaide look like the better team, on a four-game winning streak having seemingly figured it out after the loss to North Melbourne in Round 4 left them teetering at 1-3.

To be fair, the quality of teams they’ve beaten in that span is questionable (GC, STK, Freo, PA); but similarly, Brisbane haven’t beaten a decent team since Port Adelaide in Round 3. Perhaps the most interesting thing about this match-up though, is the contrasting styles of the two teams.

Brisbane are scoring 91.5 ppg, 3rd in the comp, while Adelaide have reinvented themselves around their defence, giving up the equal least points so far, at 66.9 per game.

Alex Keath has been a revelation, stepping up his game after Tom Doedee went down with a season ending knee injury.

I think the Crows defence wins the battle against the Lions exciting but still young forward line and Adelaide will proceed to put up points against a Lions defence rated worst in the comp by some advanced metrics.

Geelong v Bulldogs
4.35pm at Geelong
You just can’t tip against Geelong in Geelong (unless they’re playing Sydney who weirdly seem to win there every year).

Yes, the Cats have already lost there once this year, but GWS are a top-four team; this Bulldogs team ain’t.

The only worry about Geelong is the quietly accumulating nagging injuries to both their guns (Selwood, Menegola, Dangerfield) and important role players (Rohan, Atkins); if they decide to get cute and rest a few guys then go ahead and give the Dogs a sliver of hope.

The Bulldogs strength is their midfield; but provided the Cats have most of their guys available, their own midfield is pretty handy too.

Geelong should win this game at either end though; with one of the best defences in the comp and a newly dynamic, productive forward line.

Essendon v Fremantle
7.25pm at Marvel
How the hell do you tip Essendon games at this stage? By my count they’ve played three good games (Melb, Bris, NM), four crap games (GWS, STK, Geel, Syd), and one half and half (Anzac day).

Playing at Marvel, they should be able to blow away a Fremantle team that struggles to score and makes plenty of mistakes.

That being said, I could just as easily envision a game where the Bombers inexplicably revert to the slow unimaginative ball movement that leaves them stuck in their defensive half for big chunks of time.

The deciding factor I think (hope) will result in the former scenario is that this is pretty much a must win for the Bombers.

Drop this game and next week you have to go up against the Zombie Tigers who refuse to graciously fall away despite seemingly losing at least two of their best squad each week.

That looks like 3-7 to me, and if that’s the case we can probably write them out of finals contention for another year.

However, a win this week plus a win against Carlton before the bye would put them at 5-6, with a second half schedule that at this point reads like a 7-4 finish to the year. That adds up to the 12 wins likely to squeeze into the finals, so yeah, this game is pretty important.

North Melbourne v Sydney
7.25pm at Blundstone Arena
Two of the worst four teams so far this year, this is another match that could go either way.

Oddly enough, the Swans are one of only two teams (the other is GWS) to have beaten North at this ground in the last six years!

However, the last time they did so was in 2016, with a far better team than the current iteration. The other big factor going against the Swans is, of course, the lack of Buddy Franklin.

The Roos have won the last two games against the Buddy-less Swans while struggling in games that he has suited up for.

Despite their upset win against Essendon last week, the Swans are still bad this year; and so are North Melbourne, but no Franklin plus maybe the AFL’s weirdest home ground advantage are pushing me towards the Roos. 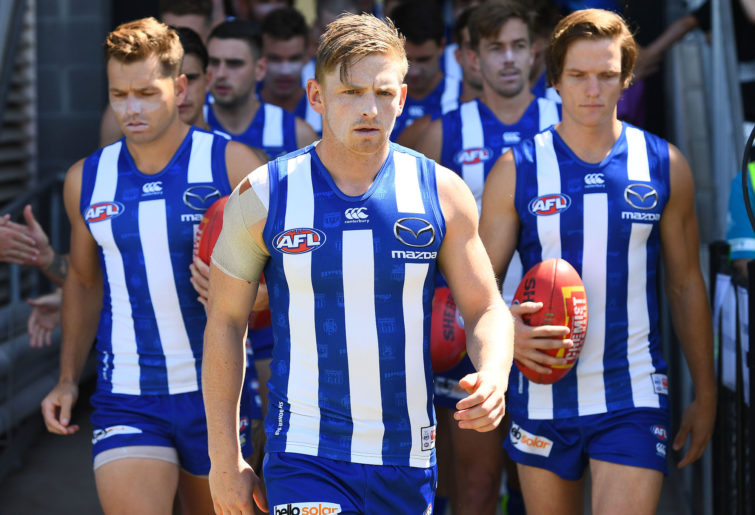 Jack Ziebell of the Kangaroos (Photo by Quinn Rooney/Getty Images)

Sunday 19th May
Port Adelaide v Gold Coast
1.10pm at Adelaide Oval
This is the exact game that Port are built to win in a landslide. The Power should set up camp in their forward 50 (league leading +10.1 inside 50 differential this year vs the Suns fourth worst -6.4) and overwhelm the Suns admittedly decent defensive crew.

Even with a few key injuries, anything other than a blowout would be a disappointing result for Port.

Richmond v Hawthorn
3.20pm at MCG
Speaking of injuries, they’re the only thing making this game hard to call. I count 8-10 of the Tigers no-doubt-about-it best 22 missing this week, depending on if Daniel Rioli and Nick Vlastuin end up playing.

Most teams have a bunch of injuries at this stage of the season though; what really makes the Richmond situation tough is that four of those players are probably in their top 6.

However, the Tigers keep winning games we don’t expect them to, scoring big road wins against Port and Fremantle when we were ready to write them off.

Hawthorn are another team who by all rights we should be done with this year, but somehow are still hanging around. Alastair Clarkson attempting to retire Jarryd Roughead last week should’ve been the white flag signalling the Hawks tank job was on; instead they crunched the Giants.

These two teams are fairly similar in that they don’t give a shit about your contested possession obsession, consistently beating teams through defence and pressure (Richmond) and superior ball movement and coaching (Hawthorn).

Give me Richmond; they’ve proved that their game plan and depth are good enough to win against mediocre teams (well, at least those that don’t feature the Messiah inhabiting the body of Aaron Naughton for a night).

GWS v Carlton
4.40pm at Giants Stadium
Put the honourable losses on hold for a week, this could be ugly for Carlton. Missing pretty much their entire backline, the Blues face the prospect of a pissed off Giants at a ground where they average 118.5 points and concede 58 points a game so far this year.

Lock of the week for me.