Six talking points from NRL Round 10

A couple of Origin hopefuls put their hand up, a former Tiger haunts his old side and proof that good things happen to good people. Scott Pryde has conveniently decided to copy his Dragons and take the week off, so I’m on board to bring you my talking points for Round 10.

Melbourne have found Billy Slater’s heir for the third time and they may still hold onto all three
Following Billy Slater’s retirement at the end of last year, many questioned whether the Storm would be able to replace one of the competition’s greatest ever fullbacks.

Fast forward to midway through 2019 and they are spoilt for choice.

Scott Drinkwater was initially touted as Slater’s replacement before he tore his pec in the pre-season, seeing Jahrome Hughes handed the gig. But a concussion forced the 24-year old out of Thursday night’s game against the Tigers and Parramatta junior Ryan Papenhuyzen lined up in the number one jersey.

Hughes had already established himself in Melbourne’s first-grade squad after filling in for an injured Slater in Round 12 last year. The 24-year old made that much of an impression that when Slater returned he wasn’t dropped from the team and instead shifted to halfback.

Drinkwater has only made one NRL appearance, last year against Penrith, and has been at the club for three years.

But Papenhuyzen is the one who has really made a name for himself, his pace on full display with the 20-year old recording two tries, two try-assists, five line breaks and 13 tackle busts in the last fortnight.

Only one will be rewarded with the full-time gig. 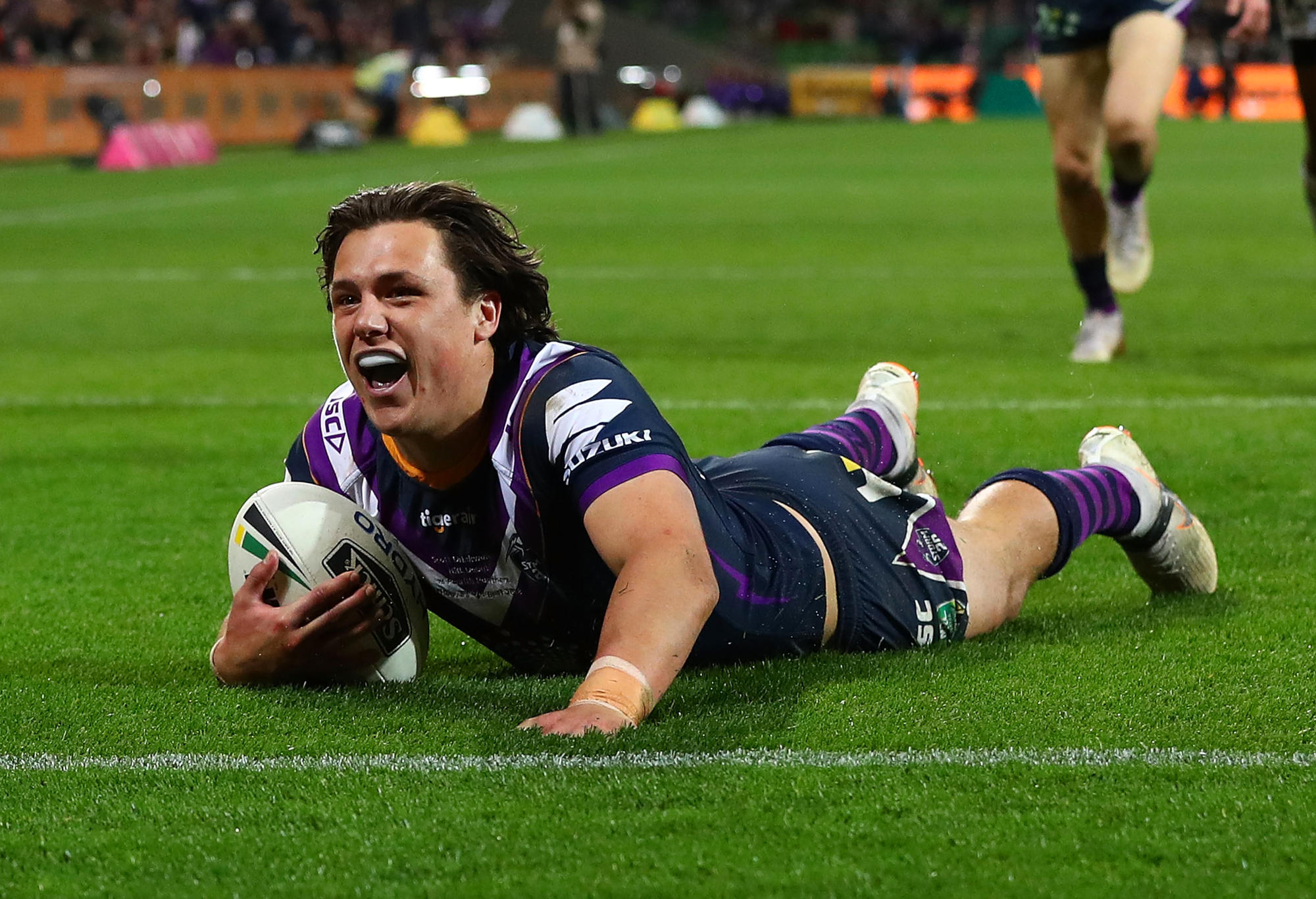 The temptation is there for the other two to pursue opportunities elsewhere, with the North Queensland Cowboys in desperate need of a long-term fullback.

But it feels as if all three will decide to honour their current deals. So often we hear the Melbourne Storm referred to as one of the best sporting systems in the country.

That Craig Bellamy knows how to get the best out of each player, be it a rookie with his whole career ahead of him or washed up veteran.

The respect and accountability he demands out of his playing group was on full display last week when the Storm smashed Parramatta 64-10, emphatically proving themselves to Bellamy after he challenged them to improve the week prior.

All three – Hughes, Papenhuyzen and Drinkwater – have spoken publicly about the appeal of moving to Melbourne. None of them started their junior footballing careers down south.

But they found themselves compelled to sign on the dotted line. And now they all are given weekly access to Slater, with each also crediting their success to his tutelage.

When all three are fit rumours will circulate. That one is thinking of leaving. That the other is fielding offers from a number of rival clubs.

But don’t be surprised if all three stay and bide their time in an attempt to be the best player they can be.

After just nine NRL games, Payne Haas is already pushing for an Origin debut
Only two months ago, New South Wales fans got the news they were hoping for.

Tevita Pangai-Junior had committed to wearing the sky blue.

But since then another Brisbane tearaway has emerged and could force his teammate out of the side. Payne Haas. 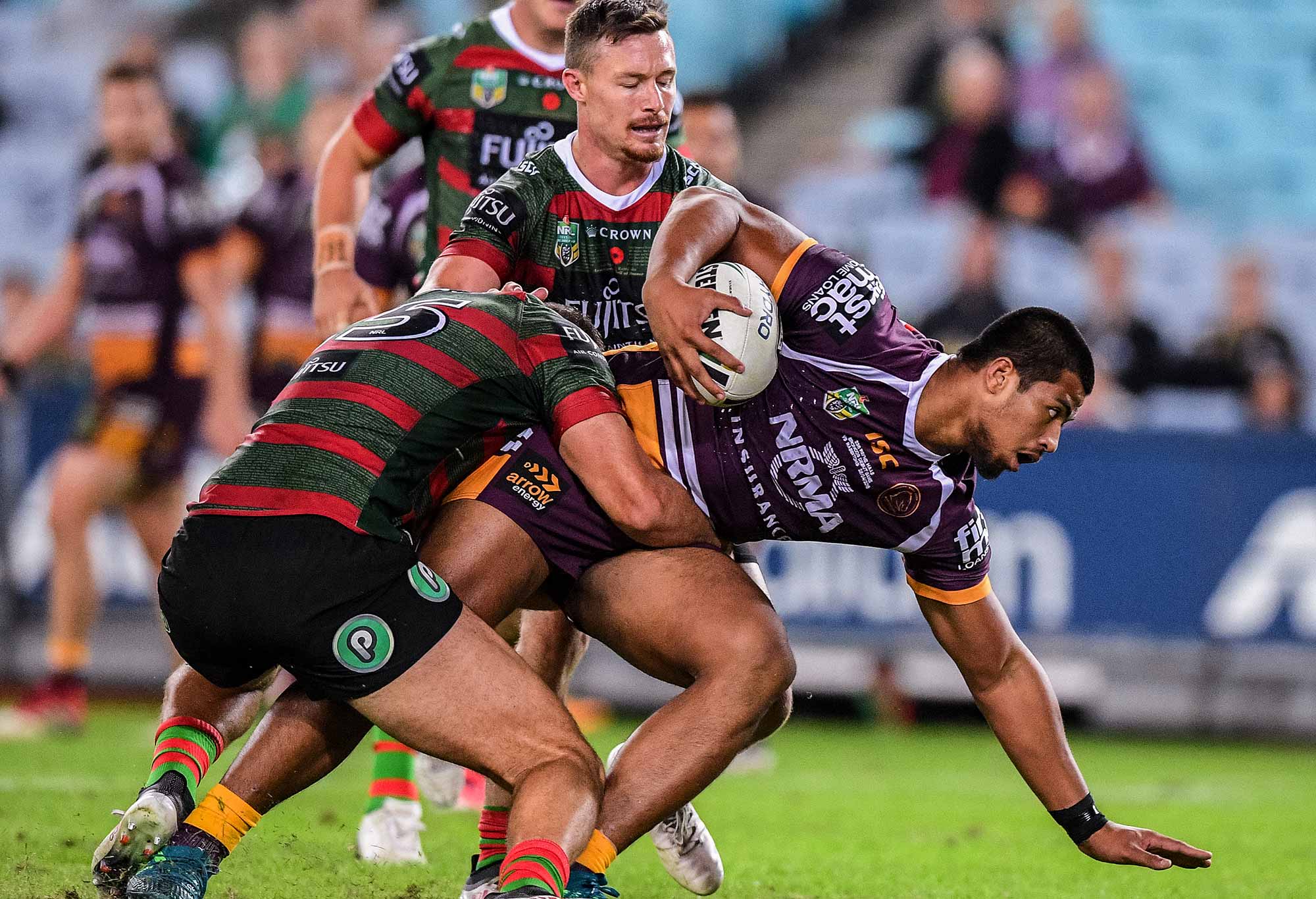 His performance against the Roosters was arguably his best of the year, with the 20-year old scoring a try, busting eight tackles and running 221 metres.

These numbers aren’t surprising though when you look at his season thus far. In six games, Haas has averaged over 170 metres, 35 tackles and four tackle busts.

And he is consistently playing over 60 minutes. It’s not a surprise though. After all, the 118-kilogram behemoth apparently beat skipper Darius Boyd in a 1.2-kilometre time trial earlier this year.

With a tackle efficiency of 92% compared to Pangai-Junior’s 84%, Haas simply demands selection.

While TPJ is more than capable, he has at times been criticised for his consistency. The question is who Haas replaces.

After the no-fault stand down policy was upheld on Friday afternoon, Jack de Belin certainly won’t be running out for the Blues.

So we may just see the 20-year old make his Origin debut in de Belin’s place.

Back-to-back losses for Canberra but they haven’t lost any admirers
The past fortnight was seen by many as a true indicator of where Canberra are at.

After falling 22-10 to the Storm earlier in the season, games against the Roosters and Rabbitohs were supposed to give us a better idea of where Ricky’s Raiders were at.

And while they lost both games, I still haven’t seen enough to put a line through their title hopes in 2019.

Yes – Canberra have only won one game this year against a side from the top eight. But Brisbane’s upset win over the Roosters this week and the Tigers’ close call against Melbourne proves that life isn’t always that simple.

However, outside of their victory over the Broncos, they have held every other bottom eight side to 12 points or less.

Their average winning margin against those teams has also been 13 points, exactly the same as their opposition this week Souths. The difference is that the Rabbitohs are able to put the better teams away. But the Raiders are close.

Tonight's game summed up in one GIF for Raiders fans. #NRLRaidersSouths #NRL pic.twitter.com/XI7HozS6Ns

Admittedly the Roosters did have a fair few injuries in last week’s game, but Canberra are also without their lethal strike weapons Jordan Rapana and Joey Leilua, while John Bateman is also still on the sidelines.

This Canberra side has far more heart than last year’s. The 2018 Raiders would have crumbled under pressure in a match like last night.

But if not for the hands of Corey Allan, Jarrod Croker may have crossed over in the 78th minute to steal victory.

Cody Walker passes his greatest Origin test yet
Like Haas, Walker has also put his hand up for a Blues jersey.

Along with Luke Keary, 29-year old Walker has been the form five-eighth of the competition this year. He currently leads the league for tries scored with 11 from 10 games.

However, if there were any doubts about his Origin credentials, you would say that they were well and truly shattered last night. Walker has been exceptional in the past month, don’t get me wrong. 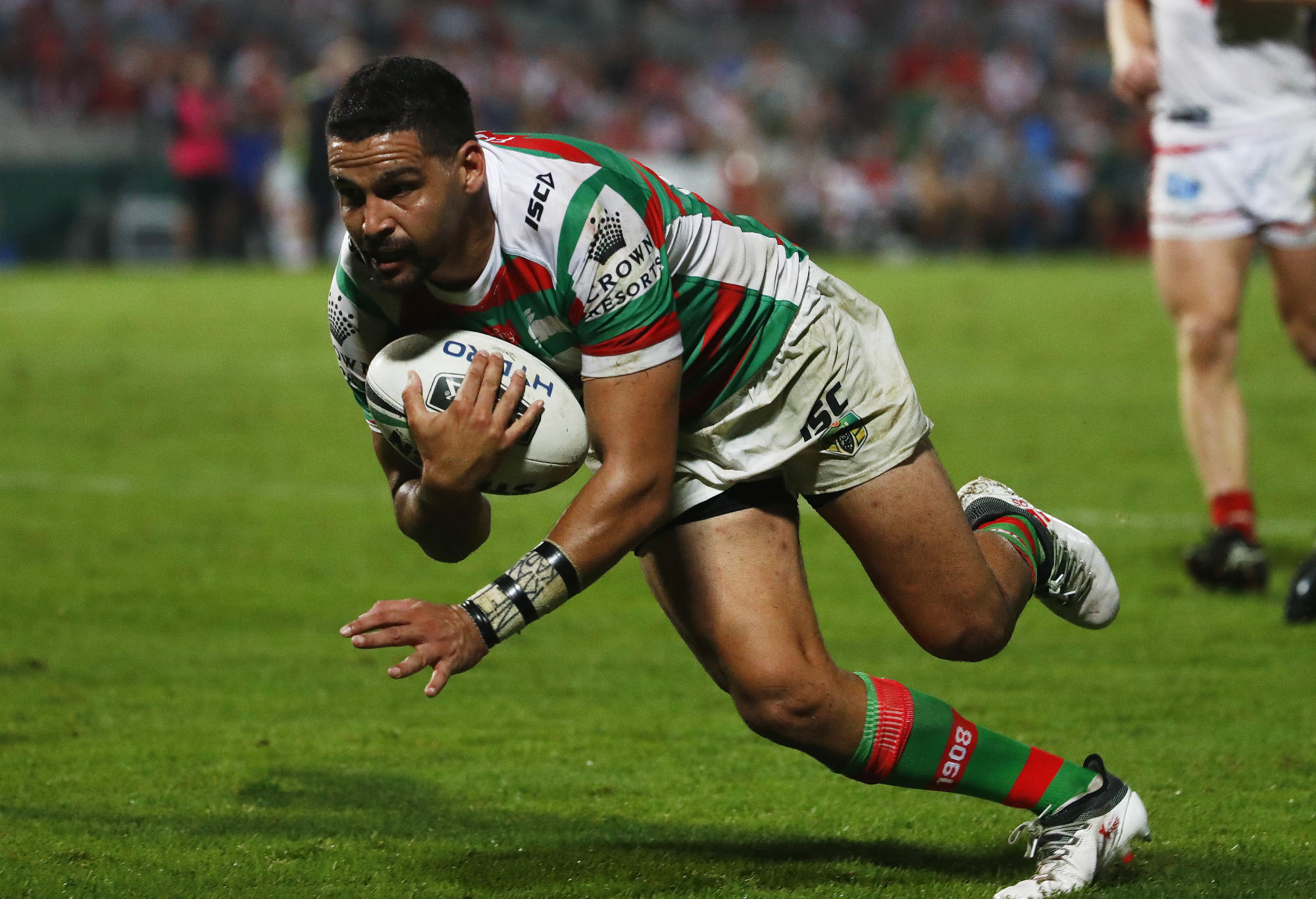 But last night against Canberra, he and the Rabbitohs were faced with a real test.

It was a tough, grinding affair where not a single try was even scored until the 50th minute. It was tense. It was personal. It was the perfect Origin audition for Walker.

And he passed with flying colours. A try, try-assist, line break and four tackle busts aren’t incredible numbers by his standards.

But this time Walker well and truly had to work for them. Canberra defended bravely for the entire 80 minutes, offering South Sydney few chances to even break the line.

Two times they did and Walker had a hand in both of them. His speed and deceptiveness to dummy and engage the line before passing short to a flying Mawane Hiroti sealed the win.

In Origin, points are at a premium. You need a genuine game breaker. Walker is that.

An in-form Danny Levi is key if Newcastle are to maintain the rage
Well, only a month ago it looked as if the Knights were again going to be fighting to avoid the wooden spoon. They had collapsed 38-14 to the Titans and had just one win to their name from six games.

Now they’ve won four straight and find themselves inside the top eight for the first time since Round 1. It’s quite the stunning turnaround and will certainly please coach Nathan Brown, who was under immense pressure to get the most out of a stacked roster.

Another Knight under the spotlight was hooker Danny Levi. Only a month ago, around the time of that loss to the Gold Coast, Levi’s manager was given permission to start shopping him around. 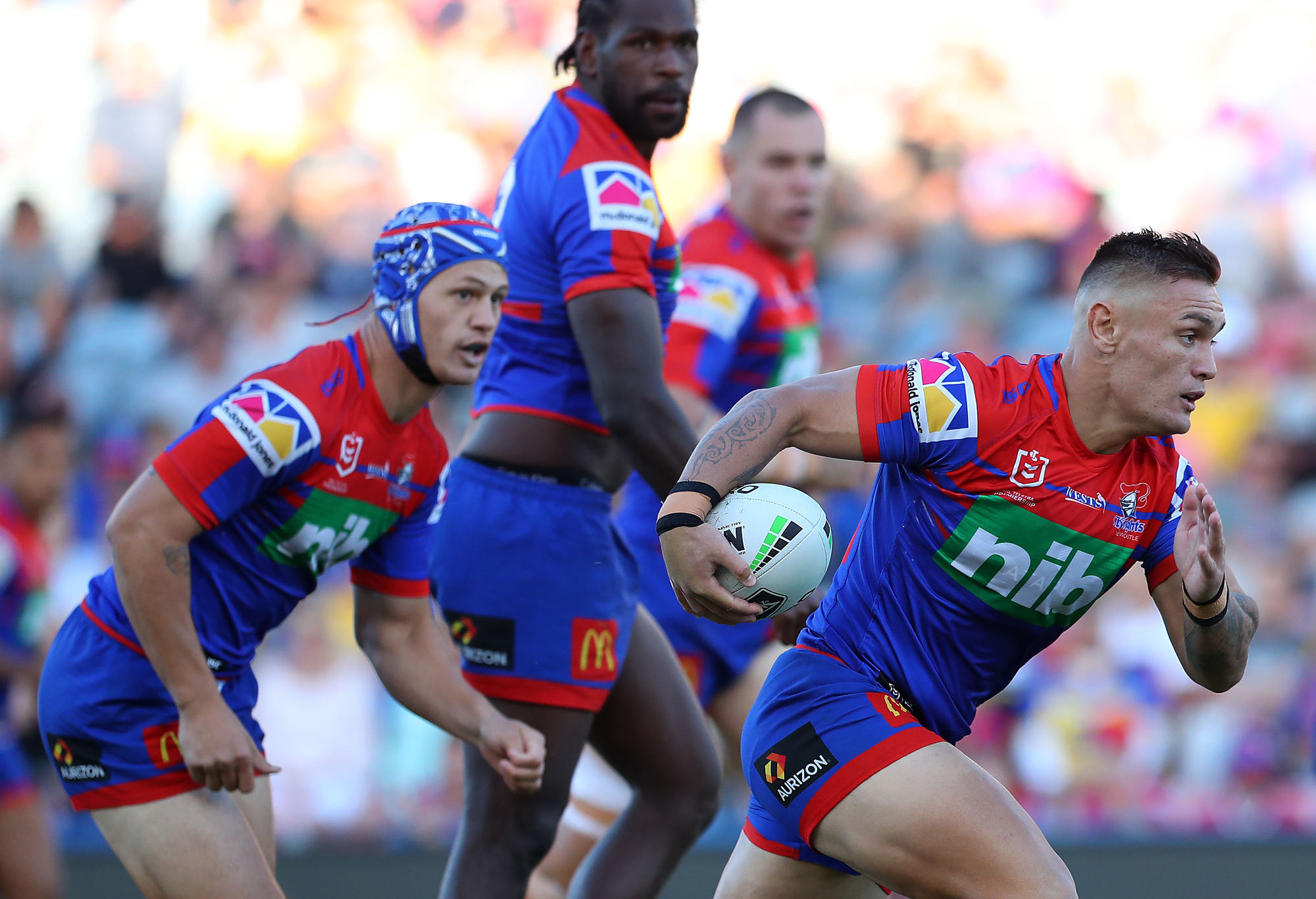 For some players, the news that they are unwanted leads to bitterness and resentment.

Levi’s past month, however, suggests that his response was the opposite.

The 23-year old was excellent on Sunday afternoon against the Dragons, providing quick service out of dummy-half which helped Newcastle roll up the field with ease.

It meant that the likes of Kalyn Ponga and Mitchell Pearce, who are deservedly getting all the praise, had the time and space to weave their magic in attack.

The arrival of David Klemmer had many rating Newcastle’s forward pack among the best in the league.

But if they are to maintain their success they need an effective number nine hitting their big men on the chest with fast passes to ensure they get over the advantage line.

And that’s exactly what Levi is offering at the moment.

A week for the good guys
And to end on a positive note, Round 10 was a week that rewarded the good guys of our game.

It began on Thursday night when Christian Welch went down with a suspected ACL tear. The 24-year old had already missed Melbourne’s 2017 grand final win with the same injury and risked another year on the sidelines as his teammates push for another title.

But fortunately for Welch the scans cleared him of any serious damage, with meniscus damage set to keep him off the field for only 4-6 weeks.

If you follow Welch on social media, you will see that this good news is surely karma for one of the league’s nicest blokes off the field.

Last year he was nominated for the Ken Stephen Medal after raising $10,000 for Camp Quality, a children’s family cancer charity. This year he is looking to double it.

And just last week at Magic Round, off his own bat, he made the weekend of one special kid.

This is a story of the magic of kindness.

The rugby league community bandied together to make a weekend for young Angus and his family that they’ll never forget.

It started with @clwelch94 replying to a news story on Twitter.

This weekend also saw James Segeyaro rewarded for his patience and persistence with his Brisbane Broncos debut.

A Broncos fan growing up, Segeyaro was only working as a barista a fortnight ago to pay the bills as he bided his time playing for Cronulla’s feeder club Newtown on a $1 deal.

And you could see the genuine happiness on the 28-year old’s face when he burrowed over to score the match-winning try.

Roarers, what did you make of Round 10? On a side note don’t stress, Scotty will be back next week as the build-up to Origin goes up another notch.

Catch all the best NRL highlights and key moments from every round on Kayo. Sign up now.