AAP
19th May, 2019
2
Join the conversation
Advertisement
Write for The Roar

Jake Granville’s faint State of Origin hopes have taken a blow, with the North Queensland hooker facing an NRL ban that would stop him making a last-minute push for selection.

Granville was charged with dangerous contact for attacking the legs of Parramatta halfback Mitchell Moses after a kick in the Cowboys’ 17-10 win on Saturday night.

With carryover points Granville faces a one-match ban for the hit, unless he successfully challenges the charge at the NRL judiciary.

The 30-year-old would then lose his last chance to impress before Kevin Walters selects his Queensland side for the Origin opener in Brisbane on June 5.

Granville is considered an outside chance for the Maroons’ No.9 jersey, with Maroons legend Wally Lewis championing his cause last week.

The Cowboys hooker is below his career-best form of 2015 but has the experience of playing in two NRL grand finals in the role.

Incumbent Andrew McCullough is out with a knee injury after struggling for form in 2019, while Jake Friend is also out with a bicep rupture.

Ben Hunt is the most likely option, although he could also end up in the halves, depending on Daly Cherry-Evans’ fitness.

Meanwhile, Moses also copped a dangerous contact charge from Saturday’s match, but will escape a ban with an early guilty plea.

Cowboys to wait longer on Valentine Holmes and Jordan McLean

North Queensland stars Valentine Holmes and Jordan McLean are not expected to recover from ankle and calf injuries to face Newcastle in Round 7.

Cowboys to wait longer on Valentine Holmes and Jordan McLean

Before I wrap up the Tigers-Cowboys clash, I would like to say well done to former Warriors coach Stephen Kearney on a great coaching career.

As I sit here and write this article, as a Cowboys fan documenting my frustration, I have no idea which song to listen to.

When you ask a Cowboys fan who their favourite player is, you understandably hear the following names. 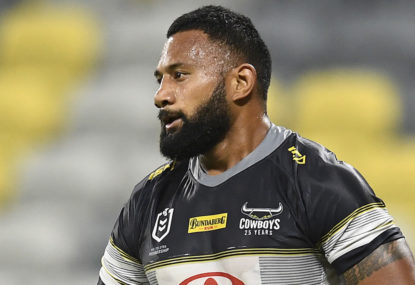