A letter to Alan Jones on the matter of Israel Folau

I played quite a bit of rugby when I was a kid and I was crap. But some of the people I played with and against were not crap at all. Some were champions.

Manly legend Tony Cox, Gordon’s Wally Freeman and ‘Doc’ Cowlishaw, Randwick’s Bruce Malouf and Queensland’s David Codey were a few of the better players I knocked around with. Coxy’s mercurial speed and magical hands used to make me giggle with delight as a kid. Some of the bruises I got packing down in scrums against Bruce and some of the tackles I suffered in backyard games of rugga against Dave still hurt.

There was another player who was even better. In what was then my adolescent opinion he was the best of them all by far. This guy not only had talent and skill to burn but had more guts than any other person I had ever met. To say I admired him is an understatement. To me he was the best young rugby player in the country, maybe the world.

The bloke’s athletic prowess was only a small part of the picture. He was one of the highest academic achievers in a high school known for high academic achievement, he held senior leadership positions at his school and he was respected by his mates, fellow students and the school’s teaching community as a young man of extraordinary moral courage and integrity.

This young bloke was such an exceptional character that even though he would be horrified at such a thing, it would not be too inaccurate to brand him with the pseudonym ‘Superbloke’.

Alan, you were coaching the Wallabies and Manly way back then. If I remember rightly, you also coached top-level schoolboy teams as well. You may have even heard of the courageous young bloke I remember so well. This kid certainly played rugby at state representative level, though I think injuries prevented him from gaining selection in an Australian schoolboy team. 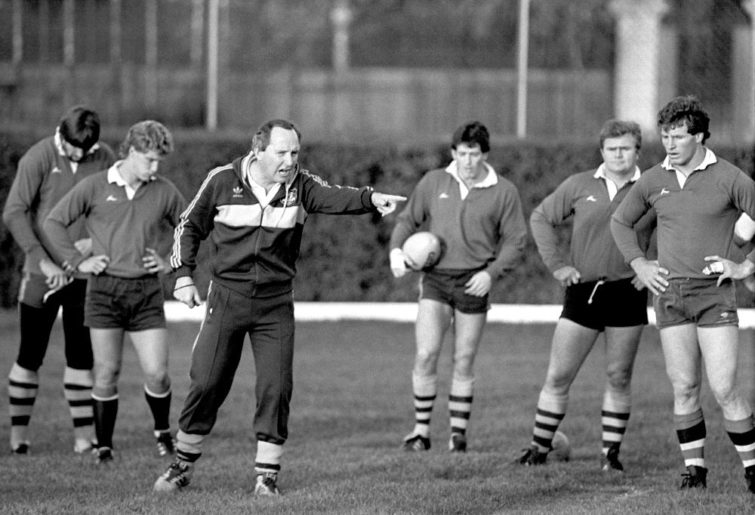 Superbloke never became a famous rugby player like some of the guys I mentioned above. For what it’s worth, I reckon that if his life had turned out differently, he could have become a Wallaby. I’m sure of it. It was never to be. This young fella took his own life during his second year of university.

To say that his family, friends, university colleagues and fellow athletes were shocked by this tragedy is an understatement. Fair dinkum. The shock and horror were so intense that people who knew him and knew of the events only talked about his passing in the most hushed of tones. It was almost as though if no-one said anything, we would all be able to go on believing it had never happened.

Horribly, nearly 50 years later the feelings of distress and horror still linger for many. I have tried talking to friends about this guy and responses to questions of, “Why” and, “What do you think happened?” are met with confused responses and blank stares. It is as if friends even today are emotionally unprepared to think about these issues. Is there anything more horrible and distressing than teen suicide?

I remember when I was that age. Maybe for many the teen and early adult years are a breeze, I don’t know, but for me they weren’t. Maybe in only slightly different circumstances, I might have taken the same decision Superbloke did. For years every aspect of my life was filled with existential panic.

Was I a worthwhile human? Why was I scared all the time? What would become of me? What was my sexual nature, and would the world find me acceptable when I found out whatever I was? Did anyone like me? Was I worth being cared about? All this stuff is as self-centred as hell of course, but many teens struggle with such questions about their value. Many teens hover at the edge of a horrible precipice.

Jeez, I’ve got no idea what life was like for you at 18, Alan. Maybe you were one of those cocky bastards I was jealous of who knew who they were, knew what they wanted and knew how they were going to get it. Maybe you weren’t. Given you are anything but mainstream, it would not be hard to imagine that you suffered your fair share of self-doubt as a teenager too.

But even if you didn’t have a care in the world as a kid, you have spent a lot of time with young people over the years. You had a successful career as a school teacher. You were a wonderful sports coach who achieved enormous success at school, club, representative and international level.

That means you spent a huge amount of time dealing with young people, kids and adults, and the stuff they are going through. As a coach and teacher you must have been aware of the anxiety many young people experience even if you didn’t experience it yourself. Even the toughest, bravest and most seemingly durable young people on the planet can also be fragile, and this must have been clear to you.

As a former coach, mentor and advocate for young adults it surprises me that you sympathise with Israel Folau in his confrontation with Rugby Australia over his persistent “warnings” to homosexuals on social media. While you are correct that Folau has every right to hold any religious view he chooses and while it is also true that he has every right to express those beliefs, it is not true that he has the right to publicly declare opposing views to an employer that has a duty of care to protect and defend its stakeholders.

Rugby Australia has a lot of faults, but can they be faulted for standing against people from within their ranks whose actions may potentially cause enormous distress and hurt to their fellow rugby players and supporters? ‘Inclusiveness’ and, even more importantly, the forbidding of the vilifying of rugby folk based on sexuality, race or religion are central elements of the role that rugby plays in Australian society. To suggest that rugby is a ‘broad church’ and can embrace publicly professed homophobic views is a bit like saying card-carrying Nazi or Communist members can reasonably exist within the Liberal Party.

Folau’s views don’t stop at expressing moral concern with being homosexual. He has repeatedly stated that hell awaits homosexuals who don’t repent. It is hard to imagine a crueller suggestion. I am not knowledgeable enough to enter into a theological debate over whether Folau’s version of Christianity is reasonable within the broad Christian tradition, but it seems to me that when Jesus and his apostles taught, they didn’t broadcast blanket rules on social media about which human behaviours would banish individuals to eternal damnation.

Surely the teachings of Jesus and his later followers were addressed to specific groups and individuals at specific places and times and each was designed to elicit a specific response from those groups and individuals. To universally damn a population group, even if that does fit within your religious beliefs, does not seem to me to be okay, and to suggest that Rugby Australia has no right to bar its members from publicly broadcasting those views also seems wrong to me.

When mates of Superbloke do discuss his death one common theme comes up every time. Most of his friends believe that he mentioned in a final letter his distress at his discovery of his homosexuality. I have no proof that this final confession happened or indeed if there even was a suicide note. Many family members have now died and other family members and friends who would know whether this is true or not are not talking. Silence still reigns, even 50 years on.

But I cannot say those things because I cannot find anyone who can confirm the facts about his passing and because there are most likely people who do not want his life and death discussed. I do not even feel comfortable writing about him using a pseudonym. If any of his surviving family or friends read this letter and recognise the story, I hope they do not find the contents distressing.

But, Alan, I do think the story deserves to be told because it illustrates why it is important for people to stand up to Israel Folau and to say that his social media posts are not okay. Such views may deeply hurt young people at the most vulnerable time of their lives. Even the most courageous and durable young people may be walking a fine line between deciding to carry on and throwing the world away.

To publicly broadcast a view that homosexuals are destined for hell vilifies those people in the cruellest way. It implies that heaven and earth find them unacceptable. Finds them vile in fact. All people, and young people in particular, should not suffer such vilification.

Millionaire athletes are paid not only to entertain but to represent their sport and its values. Any athlete who is not willing to support those values and embrace inclusiveness – and support young people on their journey into adulthood – should not accept the huge amounts of money they are offered for performing this role. Rugby Australia is entitled to expect not only that its athletes embrace its expressed values but also that athletes who don’t agree with them don’t sign up in the first place.

Alan, you are one of rugby’s greatest ever coaches. You most likely positively influenced the lives of hundreds, maybe thousands, of young men. Many of those young men must have been experiencing existential panic, serious mental health issues and feelings of low self-worth. As a leader and mentor of such people, I find it hard to believe you think Folau should be allowed to express his views in direct contradiction to Rugby Australia’s policy of supporting inclusiveness.

Even if Superbloke did not take his own life because of his distress over his sexuality, his case still reflects the fragility of young people in their march towards discovering their place in the world.

Views like those expressed by Israel Folau are their right, no doubt, but organisations like the Rugby Australia should stand against those views. I hope you do too.