Half of you may be wiping tears of laughter from your eyes right now while the other half are probably screaming abuse at their screen, but please hear me out.

Let me start by admitting that Mitchell Pearce’s State of Origin career to date has been poor.

His performances belied his considerable talent, and they consistently fell well short of what he displayed for the Sydney Roosters. And I bet Pearce would be the first bloke to acknowledge that.

Whether it was because he was the halfback, a high-profile player at a high-profile club, or because he turned up in the social pages more often than the sports pages, Pearce was made the scapegoat for the worst era of Origin football in New South Wales history.

But let’s be honest, it was hardly all his fault. Pearce was thrown into the Origin cauldron as an immature 19-year-old, replacing an injured Peter Wallace in the 2008 decider at ANZ Stadium.

In addition to the immense pressure of representing his state, Peace also carried with him the burden of his blood and a reputation as the game’s next big thing.

He wasn’t ready for this challenge. Pearce has admitted as much himself. He was too young, too inexperienced and not emotionally equipped to handle rep football. The selection panel should never have put him in that positon, especially when they were only a year removed from the Jarrod Mullen debacle. 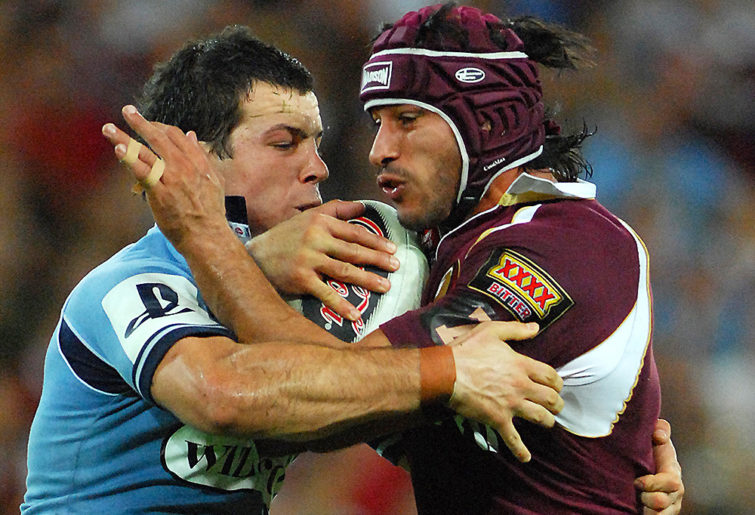 Pearce regained his blue jersey in Game 2 of the 2010 series, and held onto it for the next four years, all of which were NSW defeats. During this horror span, Pearce was joined in the halves by no less than four different partners, including one-series-wonders like Jamie Soward and Todd Carney.

And while Pearce flicked through halves partners like they were Tinder profiles, the selectors rarely surrounded him with a team fit to challenge Queensland.

The forwards were routinely picked on name and reputation rather than form, and little consideration was given to how an individual would complement the team as a whole. If a bunch of back-rowers were all playing well, instead of making the tough decision to pick the best of the bunch, NSW would simply pick them all and sort the rest out later.

Far too often this resulted in the Blues being physically dominated. The Maroons always seemed to come off their line faster, hit harder, and then hold their opponent down longer. Set after punishing set, the Blues forwards would make little inroads into the opposition defensive line, then shuffle the ball off to Pearce on fifth tackle for what was little more than a kick and hope.

Dropped for the 2014 series, it was thought that Pearce’s Origin career was over. Yet poor form from the incumbent pair (sound familiar?) and strong club performances by Pearce led to a shock recall in 2015. And again in 2017. But the selectors continued to pick the wrong team around him, and so the result remained the same.

Throughout this tumultuous time, one thing remained constant: Pearce was up against the greatest rugby league side in the history of the game. 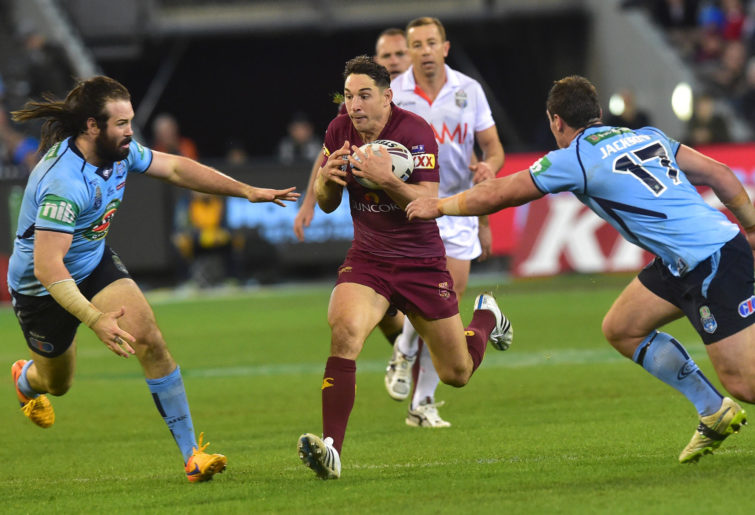 Fast forward to 2019, and the Blues find themselves in relatively unfamiliar territory. In a delightful twist of irony, the Immortals are all gone, vanquished to commentary boxes and coaching staffs. Queensland are rebuilding and ravaged by injury, and NSW are coming off the back of a rare series victory.

In clubland, the incumbent halves are once again stinking up the joint. Change is necessary and inevitable. At the same time, Pearce is in white-hot form for Newcastle, lighting up the Dally M board and pressing his case for state selection.

Could the selectors really be considered him? Again? After everything we’ve been through? You bet they are.

And before you completely write him off, picture this: you’re at ANZ Stadium for Game 3. The hype surrounding this decider has exploded, detonated by Queensland royalty Cameron Smith coming out of representative retirement to help his beloved Maroons clinch the series.

All week the media has been showing clips of Queensland’s decade of dominance. Cooper Cronk, Johnathan Thurston, Billy Slater and of course Cameron Smith, systematically dismantling the Blues year after miserable year. And after such a magnificent career, the groundswell of support is behind Smith to add one final chapter to his Origin legacy.

Standing in his way is Mitchell Pearce. The most maligned man in Origin history. Deep down you know he has the talent to win this game. You’ve watched him do it for the Roosters and the Knights, but never in a Blues jersey.

And then all of a sudden it clicks. With a strong pack of forwards in front of him and a slick backline supporting him, Pearce plays the game of his life and wins his maiden series. Better yet, he rains on Cameron Smith’s victory parade.

Even the most ardent anti-Pearcer could get behind a story like that. Rugby league is all about redemption, and there isn’t a bigger redemption story out there than Mitchell Pearce.

Now on to the rest of the team.

Fullback – James Tedesco
This one is an absolute no brainer. Tedesco is not only the best fullback in the competition, but he’s probably the best player, period. His form last series was sublime, and he’s won a premiership and represented his country since.

Wing – Josh Addo-Carr
His performances this season have been a little like those of his club side, Melbourne – brilliant at times, clunky at others, but always finding a way to get it done. Despite this, his game-breaking ability and willingness to take the tough carries make him a lock to retain his spot.

Centre – Jack Wighton
With James Roberts lost in the rugby league wilderness, Jack Bird blowing out his knee and Andrew Ettingshausen ruling out a shock return, this was the toughest spot to fill. Wighton’s physicality in defence would be valuable, particularly marking up against Will Chambers, but it’s his ability to fill multiple positions in both the backline and the pack that gives him the edge.

Centre – Latrell Mitchell
The rangy Rooster has taken his game to another level in 2019. While his total number of involvements per game remains modest, they are touches of the utmost quality. Hopefully his contract will be sorted by the time the series rolls around so Mitchell is free of distractions and focused on footy. 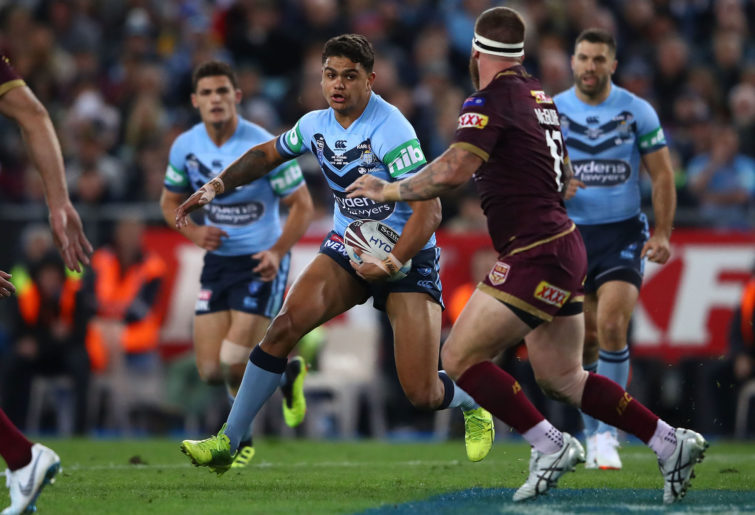 Wing – Blake Ferguson
This was a tough selection. As good a footballer as Ferguson is – and over the last 18 months he has played some outstanding rugby league – I struggle to reconcile picking a player who only two years ago prepared for an Origin decider by crushing a couple of Cruisers. But in the end, I hate Queensland more than I dislike the Ferg, so what the hell.

Five-eighth – Luke Keary
It would be a crime not to select Keary. I can’t ever recall a player putting up a stronger case for selection. Every facet of his football is peaking right now, and while Brad Fittler would like to reward those who won the series last year, not even Laurie Daley would stay loyal to the Penrith pair right now.

Halfback – Mitchell Pearce
Pearce leads the league in try assists, and has led the Knights to four straight wins. A strong defender and a durable performer, Pearce will also provide veteran leadership to what will be a very young side.

Prop – Paul Vaughan
In an underperforming St George Illawarra pack, Vaughan has remained a constant bright spot. He was solid for the Blues last year, and deserves to retain his spot in 2019.

Hooker – Damien Cook
A debut Origin series was only the launching pad for Cook’s meteoric rise in 2018. The South Sydney rake subsequently led his team deep into the finals, was awarded both the Provan-Summons Medal and the Hooker of the Year at the Dally M awards, and replaced future Immortal Cameron Smith as the Australian number 9. And he’s only getting better.

Prop – David Klemmer
After a relatively slow start to the season with his new club, Klemmer has returned to his barnstorming best over the last month. He currently leads the NRL’s forwards in run metres (1743) and routinely bends the defensive line with his trademark leg-churning surges. Plus, he comes with the added bonus of turning into a lunatic when he puts on that jersey.

Second row – Boyd Cordner ©
Cordner reminds me a little of Damien Martyn during the late 1990s. The classy middle-order batsman was always overshadowed by his more talented and accomplished colleagues, yet you could still always rely on Martyn to quietly go about his business and get the job done. In a similar vein, the strong and silent Cordner will never show up on the highlights reel, but he is as reliable as they come. 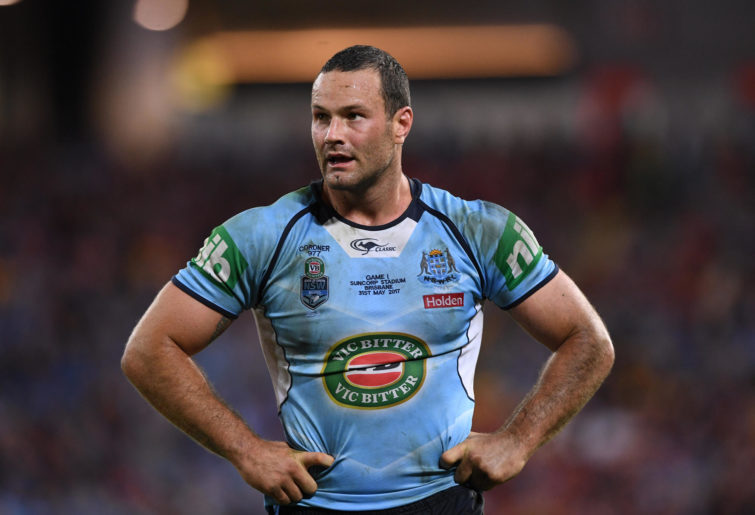 Lock – Jake Trbojevic
The older and more substantial Trbojevic brother is fast becoming one of my favourite players. He tackles like Steve Menzies, slips passes like Jason Smith, and sounds like Keanu Reeves from Bill and Ted’s Excellent Adventure. He’s an Origin captain in waiting, and has a mortgage on the 13 jersey as long as he wants it.

Bench – Cam Murray
The South Sydney superstar will not only provide energy and enthusiasm off the bench, but he can also cover a range of positions in case of injury. I could see Murray comfortably slotting into dummy half and the centres if needed. His combination with Cook will also prove damaging against tired forwards.

Bench – Angus Crichton
While Crichton might be the best-looking bloke in the team, he is probably the least sexy selection. He is a reliable performer and has proven he belongs at this level. Beyond that, meh.

Bench – Payne Haas
Picture yourself as a Queensland forward, struggling to catch your breath after 25 fast and furious minutes of madness. And then you see this mesmerising man-child hand his interchange card to the official and stride confidently onto the park. That’s why.

Bench – Dale Finucane
This Melbourne bruiser has to be one of the most serially underrated forwards in the competition. Finucane’s work rate is phenomenal and his effort level in every tackle has made him a favourite of Craig Bellamy’s for years. Deserves a crack at the Origin arena.