“Goodness! I had no idea. For, you see, I’ve been on Mars for the last decade. In a cave. With my eyes shut and my fingers in my ears.”

While listening to the NRL’s head of football, Graham Annesley, at his weekly media debrief, this above exchange between The Simpsons characters Bob Terwilliger (Sideshow Bob) and his brother Cecil immediately sprang to mind:

“There is a bit of a worrying trend emerging that I wanted to point out… There are an increasing number of penalties… penalties are trending up from the start of the year… But even more of a worry at the moment is that in [the] 20-metre [defensive] zone… in Round 10, 38 per cent of the total penalties… were in that goal line to 20-metre zone. And that is a worry.”

Graham, I speak on behalf of the majority of NRL fans when I say “No s**t, Sherlock!”

The most worrying thing about Annesley making that statement is not that he’s pointing out the bleeding obvious; it is that it is in no way an emerging trend. It is the status quo and has been for well over a decade.

Defensive penalties have been used very effectively by the NRL’s most successful teams to blunt their opponent’s attack for quite a while now. It has been able to proliferate because the referees, with the exception of a brief period last season, are incredibly averse to sending players to the sin bin.

The players know it and the coaches know it, and they play the game accordingly.

For a brief, shining moment in 2018 Todd Greenberg decided to impose a rules crackdown to counter this trend that has produced so many turgid and negative matches.

By the end of Round 10, 2018, not only was there an average of 18-plus penalties being awarded a game, there had been 35 uses of the sin bin, including that of Cam Smith by Matt Cecchin at Shark Park in Round 4.

From what I saw it was the most universally popular act carried out by an NRL referee ever. The Twitterverse exploded. Songs were even written about it.

Matt Cecchin was the most popular figure in the game.

However, while I and masses of other fans were enthusiastically behind Greenberg’s rules crackdown, it came to a grinding halt.

There was lots of speculation that pressure was brought to bear on NRL HQ by the broadcast partners, who – it was alleged – thought lots of penalties weren’t good for business and ruined game flow. Who knows whether that is why Greenberg backed down. But back down he did.

For the crackdown to work, for the rules of the game to once more hold sway, it had to be sustained.

Tragically it was not.

Enter Annesley as the NRL’s fead of football this season. As pointed out by Paul Kent, Annesley told everyone before the season started that the referees would not be blowing as many penalties this season, all in the name of better flowing games.

That’s right: Annesley told every coach that the referees had been directed to blow fewer penalties.

After the Rabbitohs’ Round 6 win over the Bulldogs – in which Dean Pay’s charges turned the ruck into something that better resembled Greco-Roman wrestling – coach Wayne Bennett lamented that Annesley’s instructions were a direct invitation for sides to use every negative defensive tactic possible in their efforts to win.

“I support what [the referees bosses] are trying to do but, at the same time, I’ve never probably been in an era in the game where the players are less compliant.”

For “less compliant” read “fully aware of how they can break the rules in order to win”.

Kerry Packer once said, “Of course I’m minimising my tax. If anybody in this country doesn’t minimise their tax they want their head read.”

Similarly, any coach or team who doesn’t analyse what the referees do and don’t do in order to create their game plan to maximise their chances of winning are idiots. Wayne Bennett and Sam Burgess are not idiots.

They know that referees have enacted Annesley’s preseason edict and blown fewer penalties. For the 2018 season the average per match was 15.8 and so far this season it is 12.9.

However, what they know has really changed is that the use of the sin bin has dropped by 75 per cent when compared to last year. So far there have only been nine players given ten on the pine. That number was achieved midway through Round 3 in 2018.

However, referees Ben Cummins and Chris Butler didn’t see fit to use the sin bin in spite of the fact that Blind Freddy could see that Burgess was deliberately cheating to slow Canberra’s attack down and allow his defence to reset.

But outrage and opprobrium should not be directed at Sam Burgess or Wayne Bennett. They are simply acting in line with the realities of the game.

Teams that don’t engage these tactics are also most likely not contenders. Just look at this:

So what can we glean from this?

The evidence is painfully obvious. Penalties without accompanying sin bins are not an effective deterrent. When the referees only use the sin bin for punching and the most heinous of professional fouls, all the teams that have any nous will actively buy extra time to better defend their line by any means necessary.

Not surprisingly, most of the penalties in this vein occur in the defensive red zone.

And it totally works. And everybody knows it.

And it is not an emerging trend.

For Annesley to say that it is raises serious questions over his suitability for the position. Has he actually been on Mars for the last decade? In a cave? With his eyes shut and his fingers in his ears?

Should the NRL instead have appointed someone to that role who has actually been paying attention to the game?

Alternatively, was Annesley just trying to quell the outrage caused by the failure of his charges in the match between the Raiders and Souths by spinning it erroneously as an outlier that needs curbing?

Burgess and Bennett knew full well that Chris Butler and Ben Cummins would be highly unlikely to send Big Sam to the bin.

But don’t blame Cummins or Butler. Just like anyone in any profession, they want to get to the top and get the best gigs. As I’ve examined before, the biggest matches – free-to-air games, internationals, finals matches, grand finals and especially State of Origin games – routinely get assigned to the referees who award the fewest penalties.

Both Butler and Cummins would dearly love to be selected to officiate in the upcoming Origin series. The way to push your case for that is not by officiating big penalty counts or lopsided counts or games with controversy over rulings.

Sin-binning a player, especially when your boss has decreed that there be fewer penalties, is a high-risk move. Cummins and Butler are not stupid.

They are both very good officials. They’ve had to be to get to this level. They know the lay of the land and they won’t be sticking their head out of the trench unnecessarily and risk a kicking from their superiors.

Especially not just before the Origin period, with both of them having strong claims to get at least a flag.

For more sin bins to happen the referees will have to be directly and publicly instructed to do so – and they must also trust that they won’t be hung out to dry if they follow those instructions.

However, during his debrief Annesley gave no instruction whatsoever to that extent. In fact he totally passed the buck to the referees.

“I don’t want to see more penalties. I don’t want to see more players in the sin bin. There’s been no instruction to the referees to blow more penalties or send more players to the sin bin. But this is an emerging trend, and if the trend continues to emerge, then you would expect that the referees would have to adjust accordingly. That’s in their hands on a game-by-game basis.”

I’m sure all the match officials will be overjoyed by that muddy, ambiguous and erroneous statement from Annesley and just champing at the bit to sin bin multiple players this very weekend… 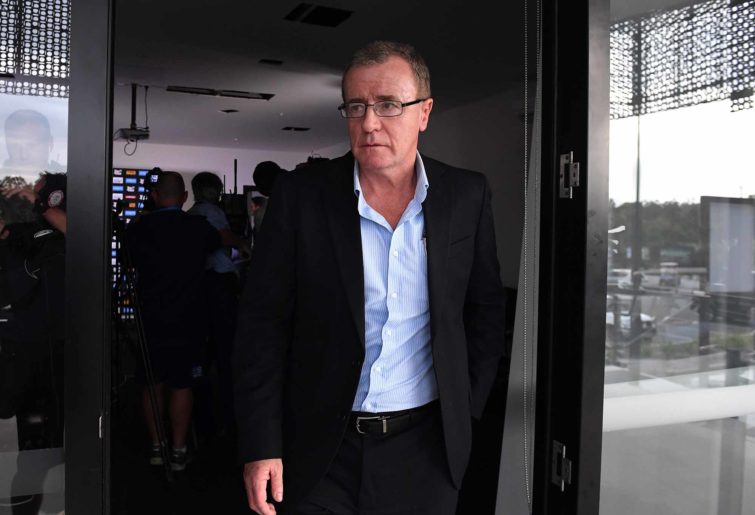 But, once more, don’t blame Annesley. He is just a pawn himself in this. For whatever reason, those in actual charge of the game – whoever they might be – don’t want big penalty counts.

They don’t want big involvement from the referees. Enforcing the actual rules of the game has been overwhelmed by the primacy of protecting the entertainment product the NRL has become. The failure of Greenberg’s rules crackdown and Annesley’s edict for fewer penalties shows that clearly.

The problem with that is that the referees, who’ve strived so hard to get a whistle in first-grade NRL through controlling games very well and adjudicating the rules correctly at lower levels, get to the pinnacle of their profession only to find themselves cast as nothing more than glorified game managers for the broadcast partners.

And now we’ve got to that stage, it’s not that big a leap to them managing the games to ensure the biggest ratings. Let’s all pray that the NRL doesn’t become WWE.

Right now the first-grade NRL referees are tasked with walking the tightrope of trying to let the game flow while at the same time not incurring the ire and outrage of the fans and media when they fail to enforce the rules or stop players going rogue like Burgess did against Canberra.

It’s a real turd sandwich they are having to eat.

And it is not an emerging trend.