Midway through his 14th season at the Sydney Swans, key defender Heath Grundy has announced his retirement just short of his 33rd birthday.

Ever since he joined Sydney from South Australian club Norwood in 2006, Grundy has given sterling service to the Swans. In his first game for the club, he kicked three goals and was a multiple goal scorer in four of the six games he played in his debut year.

Over his first three seasons at the Swans, he was in and out of the team and only managed to play 24 games during this time.

In 2009, as Paul Roos flirted with the idea of him being a forward, he kicked six goals in the first seven games of the season. But moving to the back line and establishing his credentials as a strong defender, it was another 53 games before he scored his next goal.

During this time he became a key defender who partnered with Craig Bolton, Lewis Roberts-Thomson and finally Ted Richards to become the backbone of one of the tightest defences in the AFL. 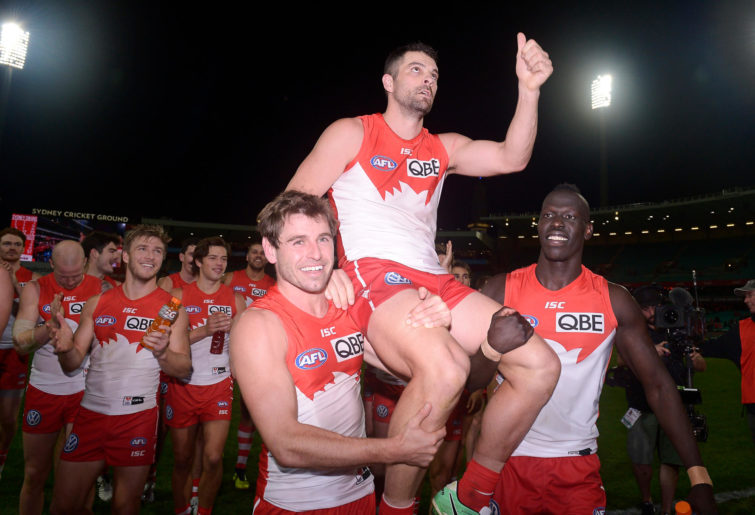 In 2010 he took on all the elite forwards of the AFL – Nick Riewoldt, Matthew Pavlich, Jonathan Brown, Barry Hall and Lance Franklin – and finished in the top five in the Swans’ best and fairest, one of his many top ten finishes during his career.

During that year he failed to kick a goal, and for the remainder of his career never kicked more than two goals in any season, completing another goalless period of 109 games between Round 4, 2014 and Round 19, 2018. His goal against Essendon in 2018 in Round 19 was his last in AFL football as he played only three more games.

After the slow start to his career, Grundy played more than 20 games a season for the next nine years, only succumbing to injury in his penultimate season with 19 games.

He wore the No.39 jumper in every one of his 256 games, and until last week was the third most prolific wearer of that number behind Darren Milburn (Geelong) and Tony Liberatore (Western Bulldogs).

Last week, Port Adelaide’s Justin Westhoff played his 257th game in No.39 as he continued his remarkable achievement of playing 132 games successively.

Like the other three premiership players who retired before him this season – Liam Picken, Tom Boyd and Shaun Grigg – Heath Grundy has achieved the ultimate satisfaction of being a major contributor to a team that has been successful in winning a flag.

In 2012 he kept Jarryd Roughead goalless and allowed him only 14 disposals, achieving the same total himself. In the semi-final of 2013, he achieved a record high of 32 possessions against Carlton, and in a losing preliminary final against Fremantle, gathered another 21 disposals.

Unlike the other retirees mentioned above, Heath Grundy managed to play one game in 2019 in Round 1 against the Western Bulldogs but unfortunately neither he or his many fans realised it would be his last match.

As the saying goes, play every game as though it may be your last, and Heath Grundy did just that.

Based in New South Wales since 1982, the Sydney Swans have been a team based in a predominantly rugby environment, and up until the last few years, they barely had any backyard talent for them to pick from to help develop a team.

For the first time in his nine years at the helm John Longmire will be an interested spectator only as the AFL finals get underway.