A day at Roland Garros

The first thing you notice when you walk into Roland Garros is that it feels small.

If Melbourne Park is a sprawling final dungeon, then Roland Garros is the early level that teaches you how to play the game.

Not that that’s a bad thing, in fact for a first time visitor the compact, easy to navigate layout is a pleasant surprise. Whereas the curving walls of Rod Laver Arena and the surrounding open spaces invite exploration that can leave you helplessly scrambling for a map, the monolithic concrete structure that is Court Phillipe Chartrier acts as a brick wall, funnelling pedestrians past a life-size tournament draw being meticulously hand painted, and towards Roland Garros’ main thoroughfare: the Grand alleé Marcel-Bernard. 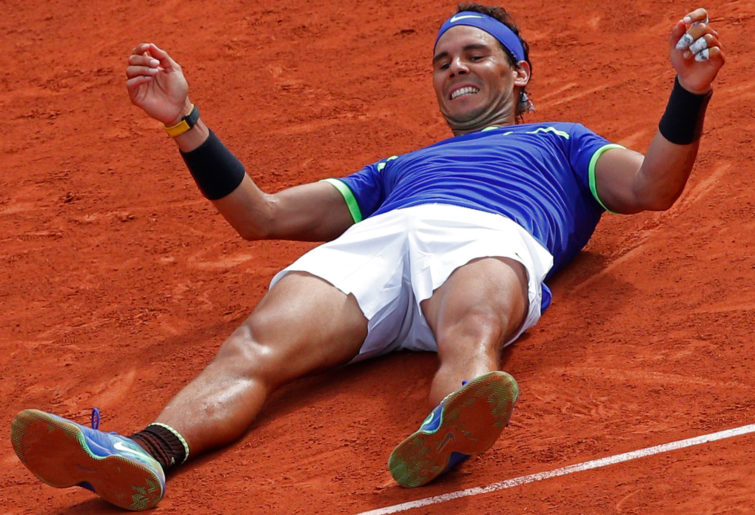 As you make your way deeper into the park, your eyes are drawn to the spectators milling around the outdoor courts, themselves hoping for a look at one of their favourites going through their practice routine. There’s also the ubiquitous boutiques selling the usual merchandise and paraphernalia that line one side of the Grand alleé, while the ever-present Phillipe Chartrier looms over you from the other, looking more multi-level car park than centre court at a Grand Slam.

Waiting at the end of this leisurely stroll (watch out for the multiple troupes of ball kids being put through their paces in the middle of the road) lies Roland Garros’ more aesthetically pleasing court and our main destination for the day: Court Suzanne Lenglen.

Not so fast though. A quick drive-by makes it clear that access won’t be granted more than an hour out from the beginning of the first match.

No worries, behind Suzanne Lenglen lies the rest of the outdoor courts; Court 10 in particular acting as somewhat of a show court where you can simply post up against the railing and enjoy a perfect view of some of the best in the world working on their craft.

On this particular morning the court is occupied by Bianca Andreescu, the breakout star of the early WTA season, along with another WTA player who I don’t recognise, plus the various coaches and hitting partners of both women.

The winner of Indian Wells in March, it’s easy to see how the 18-year-old Andreescu compiled a 31-4 win loss record to start the year; the sound of the ball off her racquet is just different to anyone else on court.

We finally file into Suzanne Lenglen not long before 11:00am and take our seats behind the baseline, backhand corner, about 25 rows back; a perfect view of the court, despite a mildly inconvenient pane of glass in front of our seats.

The first match, Marin Cilic versus Thomas Fabbiano, is played in beautiful summer-like conditions with an occasional brisk breeze that will return with more bite later in the day.

The top of my knees get sunburnt almost immediately, as if the European sun is demanding respect from an Australian who assumed a thicker ozone layer would provide protection.

Meanwhile, a not at his best Cilic is still too strong for Fabbiano, the Italian journeyman suffering from an 11 inch height deficit and subsequently unable to produce any meaningful power. Aces (13-0) and winners (32-8) tell the story as Cilic does enough to ensure a relatively stress free straight sets win.

The second match of the day is also the most interesting, although it sure doesn’t seem like it at first. For most of the first two sets Kei Nishikori, in rainbow paddle pop-inspired attire, looks like wiping the floor with overmatched French wildcard Quentin Halys, himself rocking an outfit that suggests he’s come straight to the court from a house party.

Late in the second set and seemingly lifted by a French crowd desperate for signs of life, Halys starts going for it. His forehand shows an uptick in depth and velocity, while a backhand that was non-existent to this point suddenly becomes a bit of a weapon.

It’s not enough to make a difference in a set that was already too far gone, but the Frenchman rides his newfound form to a 3-1 lead in the third set, much to the delight of a peaking crowd (while we’re here, the French spectators three favourite pastimes: 1) someone in the crowd makes a weird kind of trumpet sound, followed by the rest of the crowd shouting “Ole!” 2) a slow clap when the underdog/French player is facing break/set/match point, 3) shouting variations of “Alleeeezzzz!”).

Unfortunately for anyone who wanted to see the stadium come completely unglued, Halys predictably drops off and the unceasingly consistent Nishikori closes it out in the third.

Next up, as the once blue sky has now been almost completely overtaken by grey, is an all-Frenchwomen’s affair featuring former top-10 player Kristina Mladenovic against Fiona Ferro.

Disappointingly, and somewhat surprisingly, a lot of the crowd decide that they need a break from cheering on their compatriots and choose this moment to brave the interminably slow (as reliably reported by my intrepid sidekick/girlfriend) food and drink lines.

As a result, the atmosphere for the first set is fairly lacklustre, with Mladenovic overcoming some sloppy early play to outclass her younger opponent. The quality during the second set picks up as the crowd filters back in, Ferro digging in and upping the aggression on her groundstrokes, much like Halys in the preceding match.

We’re treated to a tiebreak, but hopes of a third set are ultimately dashed due to Ferro’s almost complete inability to win points on her second serve (25per cent for the match).

By the time the final match, last year’s runner up Sloane Stephens versus Misaki Doi, rolls around we’ve completed our transition from sunburnt to shivering, that aforementioned breeze back with a vengeance.

Doi is solid, stoically punching balls back time and again; but Stephens has shots in the bag that the Japanese lefty can’t match. In one instance, with Doi serving to the backhand side, Stephens runs around the serve to brutalise an off forehand that effectively teleports the ball to the opposite corner past Doi, who can barely take a step despite being a mere foot from the trajectory of the shot.

Stephens looks to be rolling to a comfortable win at 4-2 in the second set when out of nowhere her shots start to lose their power; suddenly we’re getting a glimpse of why the number seven ranked player in the world has been knocked out in her first match of a tournament more times than she’s made it to the quarter-finals this year.

Doi reels off three straight games before Stephens steadies herself, eventually gutting out the win in a tiebreak.

On the way out we stop to admire the now completed tournament draw, presumably waiting for day one’s winners to be inscribed tomorrow morning.

As we exit through the gates and say au revoir to the smiling tournament staff, our minds turn towards searching out a hot meal, satisfied after ten hours immersed in the clay and concrete of Roland Garros