Once, Taylor Walker was special.

Walker wouldn’t dart through traffic so much as he’d absorb it – like a drunken Scott Pendlebury – attacking the ball with his back to goal and then taking his time, as though a side-competition to winning the game was to see how many players could run past him going the opposite way.

Walker stood tall, back then. He was courageous, as much in his willingness to do abnormal things as put his head over the ball.

He saw passes that no one else did and had the nerve to attempt them and the skill to execute them. The forward with the booming kick who lowers his eyes is a treasure, and Lance Franklin and Walker have been the most prized over the past decade.

Walker was magical with the way he would play with the spirit of a small forward in a monster’s gigantic body. He could kick goals from 65 metres, palm opponents to the ground, weave through traffic, give off deft, no-look handballs, and it all kept with character.

The quiet poetry in Walker’s play hid the quiet disappointment of his career. Walker has kicked more than 47 goals three times in a season, never topping 63. He’s never made an All Australian team and it’s been seven years since he led the Crows’ goalkicking.

For a player who, on repeated given days, can look like Wayne Carey, Walker’s output has been underwhelming. He has been a quality forward, nothing more. He is not historic, and it feels like he should have been. 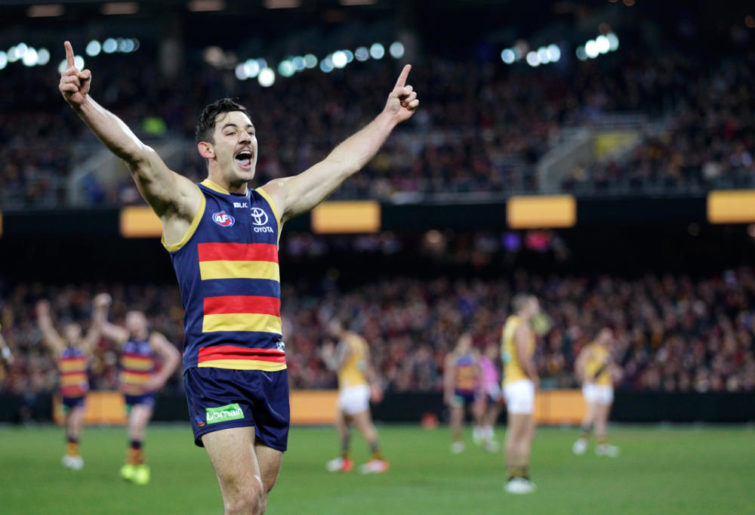 Now the wolves are at the door. Walker, the dangerous forward and subtle pleasure, has been replaced by Walker, the captain who shirks contests.

Walker’s unfortunate moment on the weekend against Shannon Hurn – his Cam Newton doesn’t dive on the fumble moment – was a single incident and sweeping truths about a man’s bravery or lack thereof can’t be extracted from a single incident.

But it was symbolic of the issue that has long plagued Walker’s game: too often, you don’t feel his physical presence in the game, you don’t feel the weight of his mass. He’s too content to dance instead of kill. He is the captain who performs a power stance to the world and then leads a team that gets eviscerated in the grand final.

The Crows have long lacked a requisite amount of violence in their game. They are tough and strong in the contest, but they have rarely played with manic force – instead succeeding with pace, skill and finesse.

This style made them the best team of 2017 until the point they played a team with that manic force and left them exposed and broken on the MCG – from which they’ve never really put themselves back together.

Adelaide’s finesse is a product of personnel – Brodie Smith and Tom Lynch give the team their identity: that pleasant, dashing, incisive kicking style. The team long for more Hugh Greenwood and Rory Sloane – more of that unconditional, menacing physicality.

Walker should be providing that. He’s not, and never really has. He will be remembered as a wonderful player – one who could, a few times a year, dominate a game, and then for the rest of the season be a fine complementary piece, regularly near the top of the league for goal assists and unusual, selfless key-forward highlights.

But now his team is at the crossroads, and Walker seems beyond that – his path is set, and looking back, the journey was complicated, memorable and ultimately unfulfilling.