Well, the biggest race in the world has been run and won. I was lucky enough to be high above turn one on Sunday afternoon to watch one of the most thrilling duels we have ever seen at the end of the Memorial Day classic.

It’s taken me a few days to really wrap my head around what I witnessed on Sunday such is the enormity of race day at the famous track on the corner of 16th and Georgetown in Speedway, Indiana, but here, belatedly, are all the talking points from another 500-mile classic.

Simon Pagenaud sets a new record at Indianapolis – not an easy thing to do – in topping the timing charts across the three biggest competitions of the Month. In doing so, the affable veteran becomes the first Frenchman to win the race in more than a hundred years.

A red flag and then a lengthy caution thereafter left us with a thirteen lap shootout where the lead changed multiple times between Pagenaud and eventual runner-up, Andretti Autosport’s Alexander Rossi.

It was intense, dramatic and exciting, as Pagenaud would get around Rossi, only to have the tables turned. And all of this with 2017 winner Takuma Sato, who came from the clouds in his Rahal Honda, stalking them both.

You couldn’t have asked for a better finish to the greatest race in the world. I can tell you that there wasn’t a single person standing on the front straight and off into turn one, and I’m going to suggest that the same could be said for the grandstands elsewhere around the giant 2.5-mile super-speedway.

The final margin of victory? A mere 0.2086 seconds. And Roger Penske’s eighteenth Indianapolis 500 win. We may never see the likes of Roger Penske’s dominance again, folks.

It really was a month of redemption for the Team Penske driver, whose position within the team was said to be in great jeopardy coming in. But his performance this month has changed all of that. 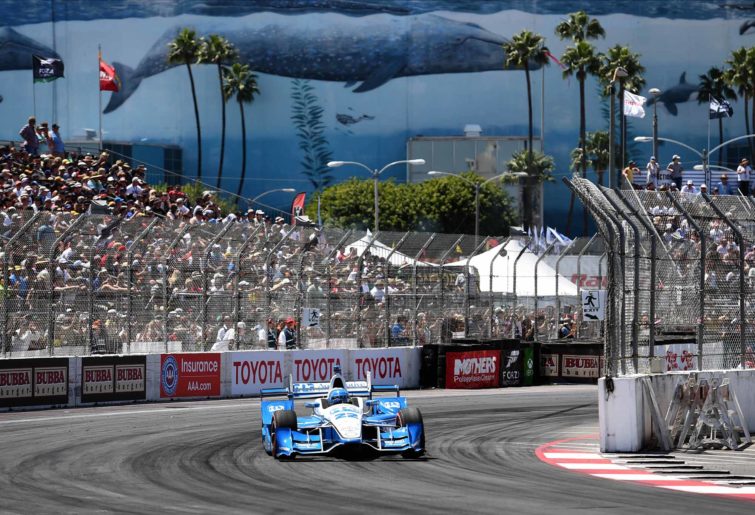 The rumours of him being replaced by Andretti Autosport’s Alexander Rossi – ironically, the man who came a close second on Sunday – have been squelched, with Roger Penske in the press conference confirming that Pagenaud wasn’t going anywhere.

You win the Indy 500 for the captain, and you’ve got some nice job stability.

Pagenaud deserved the victory, leading more than a hundred laps on the day, and always looking the dominant car, even if his fuel mileage, which didn’t matter in the end, was not as good as some of the other contenders.

The Australians
Will Power started sixth and finished fifth. His day was a quiet one, with a pit stop issue forcing him to the back of the field around the middle of the race.

He rallied without fanfare, popping up near the top of the track’s giant scoring pylon after the red flag. A decent finish for a double points event, but not the race I’d hoped he would have.

Similarly quietly efficient was James Davison, driving for Dale Coyne. The Melbournian, who had a stuffed kangaroo sitting on his car all throughout the pre-race, finished a very respectable twelfth place.

Indianapolis will probably be Davison’s only IndyCar Series start this year, but his run – which was somewhat controversial, after a pit lane tangle with three-time winner Helio Castroneves that resulted in a drive through for Helio – says that he belongs in this series.

Rookie of the Year
The American from Connecticut, Santino Ferrucci, was the highest finisher, coming home in seventh position. This guy is going to win a race before too long.

Bad Days
Marco Andretti was a mess all race long, finishing a lowly twenty-sixth. His run on the anniversary of his grandfather’s lone Indianapolis 500 win, was not good.

Colton Herta qualified fifth but was out of the race with mechanical issues on lap five.

Sebastien Bourdais, Graham Rahal, Zach Veach and Charlie Kimball all ended up in a big mess over in turn three that brought out the red flag. Rahal and Bourdais were the two antagonists, with Kimball and Veach, both having quiet and good runs, getting caught up in the mess. Rahal was furious in the aftermath, giving Bourdais a few pieces of his mind as the IndyCar safety crew worked around them.

NBC’s debut Indianapolis 500 was great
Being there meant I didn’t watch the race broadcast, on which play-by-play was provided by Australia’s own Leigh Diffey, but I’ve seen Twitter snippets and heard plenty from those who had, and the general consensus was that NBC’s broadcast breathed new life into what had become a somewhat stale event on ABC.

The ratings suggest the same, with a 15% bump as compared to last year. Look for that to rise again, as NBC figure out what worked and what didn’t, and listen to viewer feedback.

No weather interruption
The forecasts were dire. Right up to Saturday evening forecasts, it was supposed to rain between 5am and 9am, then be dry until about an hour after the scheduled green flag (12:45pm) and hit/miss storm activity was forecast after that, leading many to speculate that we’d be back on Monday or else have a race that was called after 101 laps, making it the Indy 252.5, which clearly doesn’t have the same ring to it!

Instead, the weather was fantastic. Late sunshine, but importantly no rain. The closest any showers got during the race was about 60 miles. To look at the radar – as I did somewhat religiously throughout – was to see large cells north and south.

Somehow, our luck held, and we saw the full five hundred miles, and even after the race, it didn’t rain. Heck, it wasn’t even raining Monday morning. This was a good one for the forecasters to get very wrong.

You will definitely not see a bigger crowd at a single day sporting event, but it’s more than just the sheer size that’s amazing. It’s the history. It’s the marching bands. It’s the pre-race fly-over.

It’s nearly 400,000 people singing “Back Home Again in Indiana” as one. It’s the goose-bumps when they fire the engines. It’s the insanity of eleven rows of three cars taking the green flag and diving down into turn one at somewhere around 230mph.

It’s five hundred miles towards racing immortality with more twists and turns than you could ever imagine. Go to this race and you won’t be disappointed.

Next Up
The IndyCar Series heads up north this weekend for a completely different event to the 500: a double-header on the physical streets of Detroit’s Belle Isle Park.