Should New Zealand have really won the 2011 Rugby World Cup?

Israel Folau, will he or won’t he take Rugby Australia to court? Raelene Castle, will she and should she survive the whole Folau saga? Can RA afford a long drawn-out episode in the courts? These questions currently dominate the headlines here in Australia. Worse, it’s a World Cup year!

Questions about who our best option is to start at five-eighth and who should be at the top of the list for the fullback spot should dominate discussion but, regrettably, this isn’t the case, so I’m doing my bit to change the subject and tone of the rugby conversation in Australia.

And what better way to do so than lob a few grenades over the ditch to our Kiwi neighbours. All tongue in cheek, of course!

My dear Kiwi friends, before you pull out the obvious comebacks, know only that we are jealous of your rugby success and so on, which I will address next. So credit where credit’s due!

But now onto the first grenade: your Rugby World Cup successes, which I would argue still do not match those of Australia’s. Yes, I know – three World Cups to two, et cetera, but unfortunately I must rain on your parade.

The first, in 1987, was a hastily put together invitational tournament in which you played all but one game on home soil. The second was totally on home soil.

Having the odds stacked in your favour for two of your World Cup victories diminishes the achievement. So does that mean our two Rugby World Cup wins, played thousands of kilometres from home, in unfamiliar conditions and in hostile territory, trump your three titles?

Before you start commenting, I have one more grenade to throw. And if the above doesn’t get a reaction, this one hopefully will.

In the 2011 Rugby World Cup final, the French were robbed.

It is not an accusation I underarm lightly, but the following is my carefully considered opinion supported by indisputable video footage. The footage highlights indisputably the exact incident which, if correctly adjudicated, would have given France victory.

Before we get to the robbery, it must be highlighted that the referee in charge was Craig Joubert. Mr Joubert’s interpretation of the rules, as was the case with the final itself, meant turnover ball at the breakdown came at a premium.

To successfully pilfer the pill, it had to be almost perfectly executed before any clean out was initiated. He was quick to call, “Ruck, hands off!”, making the pilfer a rarity under his arbitration.

Attacking teams under Joubert got the rub of the green in that if there was any infringement made at the breakdown in attempting a turnover, a penalty would ensue. The lack of turnover ball and counter-attacking rugby made the 8-7 final score no surprise.

So it came as a shock that at around 74:55 on the clock a blatant infringement by repeat offender Jerome Kaino at the breakdown went unpunished. If a penalty was given by Joubert, the ever-reliable Dimitri Yachvili would have slotted the three-pointer for a famous 10-8 victory to France.

Now to the shocking evidence. The infringement, as illustrated in the first picture below, shows clearly Kaino not supporting his body weight in attempting to turn over the ball. 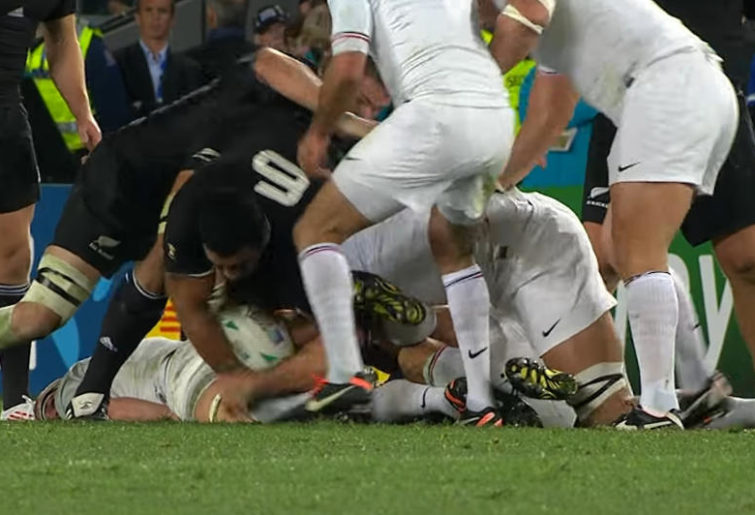 In the second picture below, with Kaino completing the pilfer illegally, the ball in hand and Kaino unable to support himself on two feet, he falls to the ground. 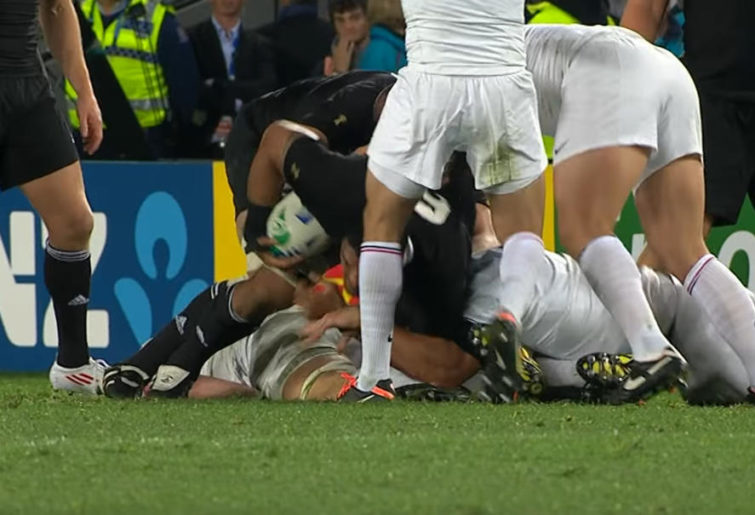 I can still hear the echo of halfback Yachvili (shown below) shouting, “Monsieur Joubert, penalty s’il vous plait!”. When the penalty does not come? “Sacre bleu!”.

The shot also shows again from another angle Kaino not supporting his body weight and Joubert looking straight at the play. It cannot be argued that Joubert’s vision was hampered. 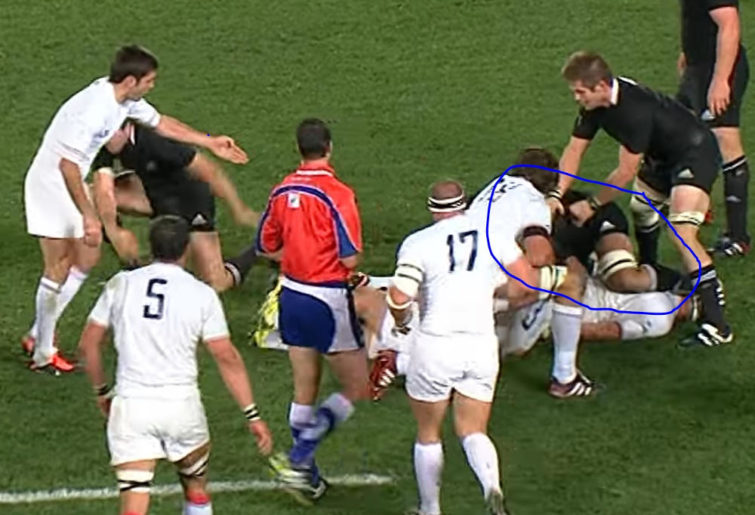 One more snapshot just to ram home the irrefutable. The still below shows Kaino at the end of that phase. He is now on the ground, letting the ball go as he is worried about turning the ball over illegally, expecting like everyone else outside New Zealand a penalty to France to be blown. Just look at his face. Guilty! 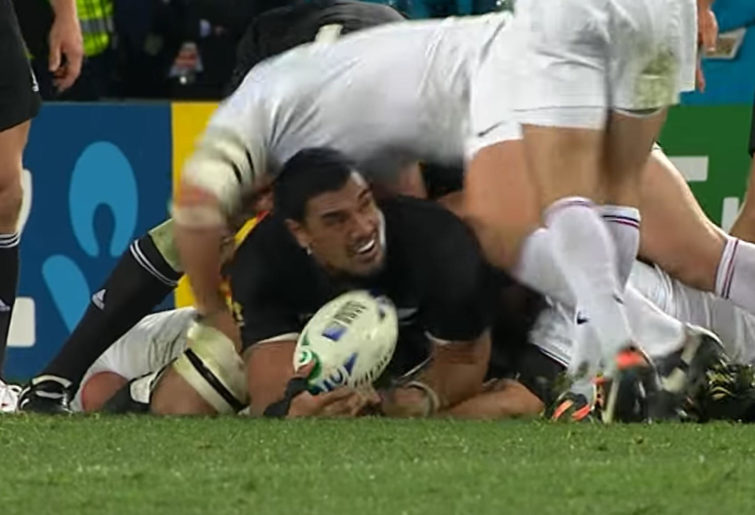 But a penalty was not given and play continued to the next breakdown, where a scrum was given with the feed to France. Even the knock-on wasn’t ruled. To this day I am still baffled.

There you have it. I cannot envisage any opposing view of validity. It’s clear the 2015 Rugby World Cup is really the only one New Zealand should crow about.

In conclusion, history may not see the French as the winners of the 2011 Rugby World Cup, but in my heart they will always be the victors.

And to my fellow Australians, rest assured we can sleep easy knowing our two Rugby World Cups, were won fairly and squarely on the shores of the enemy.

If the article warrants comment, I look forward to replying without bias and in the balanced manner in which I have penned this article.