BenH
Roar Rookie
29th May, 2019
5
Join the conversation
Advertisement
Write for The Roar

A local footy club, the Gungahlin Golden Sun Moths, have been frantically trying to replenish their forward stocks ahead of this weekend’s must-win clash against the University of Canberra Crabs after a wardrobe malfunction at training left three players with minor burns.

Questions are also being asked of club administrators as mounting evidence suggests that the team’s new ‘high performance’ uniforms were purchased from a Balkan-based fabrics company that’s mostly known for supplying bed sheets to the Ku Klux Klan.

Forwards Dave Bukowski, Franko and Marcus ‘The Flop Sweat’ Taylor were treated by ambulance officers on Wednesday night after their new jumpers caught fire during a forward pressure training drill.

Volunteer forward coach and occasional Paul Lyneham impersonator Andrew Barkley accepted some responsibility for the incident after refusing to remove his cigarette while laying tackles on his forwards.

“My father played 38 games for St Kilda with at least three darts crammed in his mouth at all times,” said a mildly flustered Barkley. “It was never a problem back in those days because wool isn’t flammable.”

Barkley said the fire started when he tackled key forward Franko, who in the panic ran immediately into Bukowski, who then fell backwards into The Flop Sweat.

“At first I thought they’d finally got our set play for forward entries right,” said Barkley. “Then I realised something was terribly wrong because they were definitely on fire.”

Half-back flanker Jerry McLusky, a local firefighter, extinguished the trio with the firehose from the back of a Scania 4667. McLusky has since been disciplined for unauthorised use of government property to get to footy training.

Some players also reported breaking out into rashes, rekindling memories of last year’s debacle at the best and fairest dinner where club champion Wayne ‘Fridge Magnet’ Schloss returned his medal because he’s allergic to fake gold.

Attention is now shifting to the player’s uniforms, which were purchased from a company in the Balkans that shares an address with a company that supply America’s resurgent white supremacist group, the Ku Klux Klan, with bedsheets.

The company’s suspicious, pop-up swamped, website described the business as a high performance sporting garments manufacturer with “unmatched quantities of rayon, acetate and triacetate”. These ingredients are typical of silk sheets and are highly flammable.

They are also common to a number of airborne chemical weapons banned under the laws of armed conflict.

Several players said they became concerned about the quality of the garments when they were instructed during the offseason to purchase large amounts of a cryptocurrency called ‘SheetCoin’ to be used in a subsequent trade for their uniforms.

Another week of footy has passed us by and, while it doesn’t quite line up nicely with the end of a round, Sunday night is the night for AFL talking points – no doubt about that. Here are mine from the week past. Port Flag-elaide? It can take a long time for a football team […] 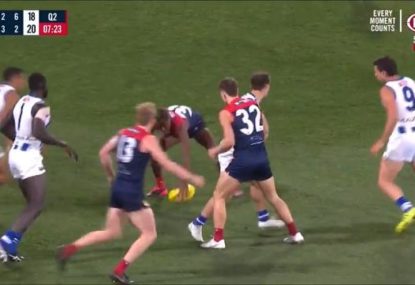