Kersi Meher-Homji
Expert
31st May, 2019
8
Join the conversation
Advertisement
Write for The Roar

As I watched the one-sided Cricket World Cup 2019 opener between England and South Africa on Thursday night, I recalled some exciting cliff-hangers from tournaments past.

And I have watched most of them, either live or on my couch in front of a television screen chewing the TV remote in suspense.

Here they are in chronological order.

West Indies beat Pakistan by one wicket at Birmingham, 1975
This thriller hung in balance until the very end. With skipper Majid Khan, Mushtaq Mohammad and Wasim Raja scoring fifties, Pakistan totalled 7 for 266 in 60 overs.

The eventual champions were then in trouble at 5 for 99 and 9 for 203, despite captain Clive Lloyd’s 53. The destroyer was Pakistan’s fast medium bowler and man of the match Sarfraz Nawaz, who claimed four victims.

Mark Browning wrote in A Complete History of World Cup Cricket 1975-1999, “Perhaps he [Sarfraz Nawaz] was annoyed by the strange, coloured toweling hats worn by the West Indian top order. Whatever the motivation, the big lumbering medium pacer made short work of Gordon Greenidge, Roy Fredericks and Alvin Kallicharran.”

But No.8 batsman Deryck Murray (61 not out) and No.11 Andy Roberts (24 not out) showed determination, adding 64 valuable runs for the unbroken last wicket and the West Indies won by one wicket with only two balls remaining.

The ground was invaded by the Windies supporters equipped with bugles and bongo drums.

The Windies went on to lift the first World Cup as Australia ran out of luck at Lord’s in the 1975 final. 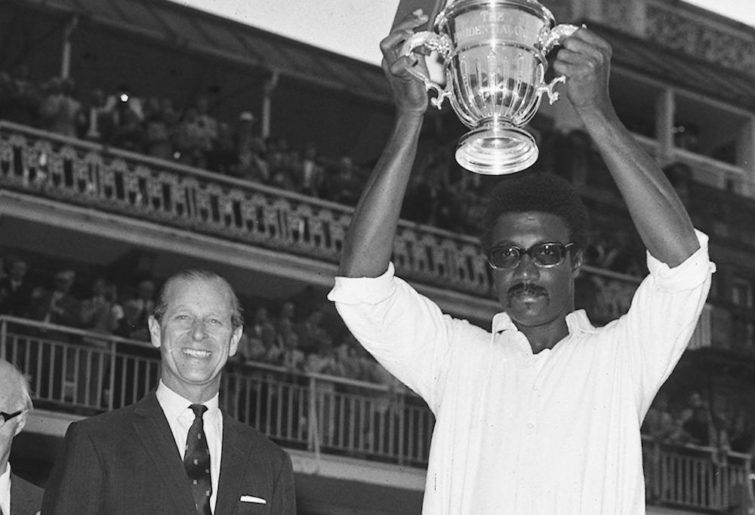 The two strongest teams, the West Indies and Australia, entered the decider of the inaugural World Cup.

Ian Chappell won the toss and sent the Windies in to bat. Opener Roy Fredericks hooked a Dennis Lillee bouncer over the boundary but lost balance and fell on his wicket. Call it six and out!

Bespactacled skipper Clive Lloyd joined Rohan Kanhai at 3 for 50. Lloyd was at his blistering best, savaging Lillee, Jeff Thomson and Gary Gilmour. He reached his century off just 82 balls, belting 12 fours and two sixes. Gilmour finished with 5 for 48 and the Windies totalled 8 for 291 in 60 overs.

Australia replied strongly, being 1 for 81 at one stage, but Alan Turner, Ian Chappell and Greg Chappell were run out by Viv Richards. Cool and calm, Doug Walters scored 35.

When the ninth wicket fell at 233, Australia needed 59 runs for victory in 7.1 overs with only tail-enders Thomson and Lillee remaining. It seemed all over but the Aussie speedsters turned into debonair hitters and the Aussies needed 21 runs in the final two overs.

Vanburn Holder bowled a no-ball, Thomson skied it and Fredericks caught it. In the pandemonium, the crowd did not hear the no-ball call, and believing that the Windies had won, thousands swarmed onto the pitch, bongo drums and all.

The fielders were knocked about and the ball was lost as Lillee and Thommo kept running. The umpires called it a dead ball and three runs were added.

But the break ruined Thomson’s concentration and he was the fifth Aussie to get run out as Australia lost by 17 runs.

As Wisden 1976 summed up, “It was the longest day of the year; the longest day in cricketing history [the match ending at 8.43 p.m.] and one that those who were there and the millions who watched it on television will never forget.”

Prince Phillip presented both the trophy and the man of the match award to the victorious captain Lloyd.

Look out for more World Cup thrillers on The Roar in days to follow.