Nobody disputes that Stephen Curry is the greatest shooter in NBA history. Anybody who says otherwise is hating.

As good as Ray Allen was, he didn’t take deep threes or shots off the dribble like Curry does. Even with his high volume and all the ridiculous shots from the logo, Curry has maintained a career 43.6 per cent clip from three. Perhaps more importantly, this figure is 40.8 per cent in the play-off arena.

However, Curry still chases that elusive finals MVP award. It’s the only thing missing from his gaudy resume.

In the absence of Kevin Durant, Curry has the chance to be the best player on a championship team. This feat separates the greatest players in history from the rest. One could argue Curry was the best Warriors player in the 2015 title run if you were to analyse the play-offs as a whole. However, Andre Iguodala overshadowed him against Cleveland and picked up the finals MVP award. More importantly, that awful Cavs roster – with no Kevin Love or Kyrie Irving – took two games off the fancied Warriors. As much as we all love Delly, they had no business winning two games in the finals. 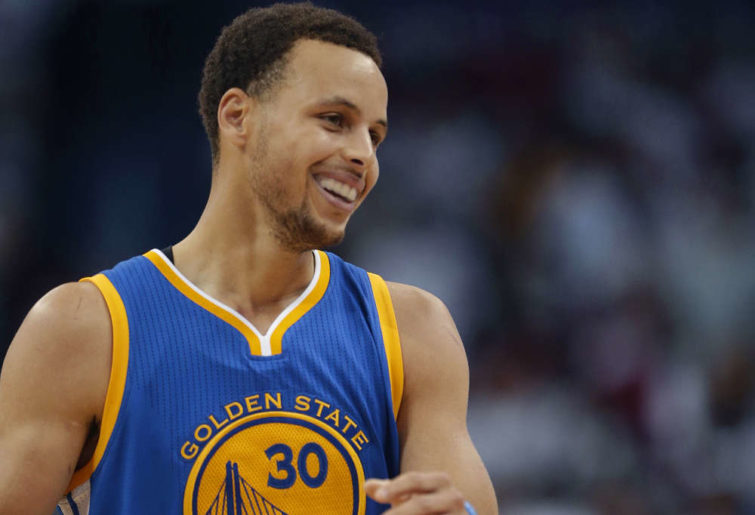 The Golden State Warriors are more likely to chase a championship than records this year. (Photo: AP)

Furthermore, OKC pushed the Warriors to seven games in 2016 before their infamous finals defeat (3-1 jokes anyone?). In theory a 73-win team really shouldn’t be in a seven-game series, let alone losing one. Curry was the unanimous regular season MVP that year, with many fans attributing his finals performance to injury.

Kevin Durant arrived the following year and the Warriors strolled to the title with only one loss in the entire play-offs. Durant won the coveted finals MVP award and repeated the feat in the 2018 play-off series.

The Warriors have been tested only once in the Kevin Durant era. In 2018 the Houston Rockets took them to seven games, with many fans believing Chris Paul’s hamstring injury cost them certain victory. Durant was the standout player in this series, once again overshadowing Curry.

In the 2019 Rockets-Warriors rematch Durant went down with a calf injury late in Game 5. Fans were quick to praise Curry for his performances throughout the remainder of the series, which the Warriors won in six. However, everyone was also quick to forget Curry’s abject shooting in the first five games.

Curry shot a paltry 28 per cent from thee across six games against Houston. He is arguably the reason they lost Game 3, during which he shot 30 per cent from the field and 22 per cent from three. Durant, meanwhile, was his usual self before going down, averaging an efficient 33 points per game. Without him the Warriors almost certainly lose Games 1, 2 and 5.

Curry then torched Portland in the conference finals, but almost everybody saw the sweep coming. The real test was against Houston, who pushed the Warriors to seven games the previous year. Curry struggled when it mattered most, largely due to the defensive efforts of Chris Paul and PJ Tucker.

Perhaps it would be too harsh to call the greatest shooter in history a flat-track bully, but Curry’s history in tough play-off situations leaves a lot to be desired. In the absence of Kevin Durant, however, he can take ownership of the Warriors.

Curry was a standout in the Warriors’ Game 1 loss to Toronto, the best defensive team in the NBA. If he continues this level of play and the Warriors walk away with a series win, Curry should undoubtedly win that coveted finals MVP award.

However, if the Raptors win and Curry struggles, his ability to lead a championship team will be questioned.